Feast of the Dedication of St Chad's Cathedral

Today is the feast of the dedication of St Chad's Cathedral in Birmingham. For those who have not visited this great work by Augustus Welby Pugin I would urge you to do so. 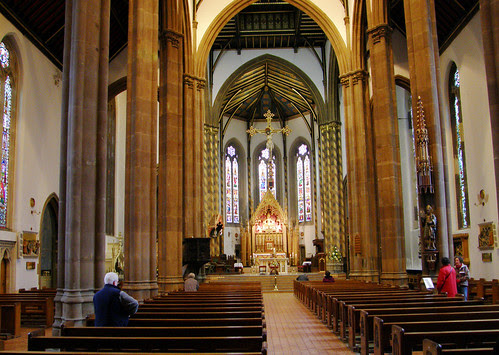 Though it suffered in the 1960s from some serious wrecknovation, restoration work in recent years has done much to redress the damage done, and the plans for more work as outlined to us on a visit by the Brothers of the Oxford Oratory were very impressive.

The feast is, of course, not so much concerned with the building as with it as the symbol of the Church as built up of living stones. However by focusing on the cathedral it reminds us of our Catholic unity with the Archbishop as the cornerstone of our local edifice which itself is a stone of the whole Ecclesia Dei held together by the Pope as Vicar of Christ. By blending the symbol and the reality it also reminds us of how Christ and the Church sanctify creation - us and Pugin's bricks and mortar - as an act of praise to the Creator.