My good friends the Canons Regular of the New Jerusalem have sent me details of their eighth anniversary celebrations next weekend. Unfortunately I cannot attend - I have a previous arrangement and California is a bit far for day trip from Oxford (with or without Icelandic ash clouds and BA cabin crew strikes).
However if any readers are within reach I would urge you to go along to the Mass
of Thanksgiving in the Extraordinary Form at the Norbertine Abbey of St Michael at Silverado in California. The Mass is at 10, and followed by a reception.

I met Dom Daniel Augustine and his Canons at the CIEL Conference at Merton here in Oxford in 2006 and again at the first of the Latin Mass Society's training conferences there the following year. I was very impressed by their vision and commitment, and by their great friendliness. They are a community I keep in my prayers and wish well. I am very happy to introduce others to them either in person or through their website, or by publicising this anniversary celebration. Their vision of what can be done within the Church is both truthful and attractive.

If, like me, you cannot attend, please keep CRNJ in your prayers both on Saturday and on a regular basis.

Here, courtesy of the New Liturgical Movement, are some pictures from last year's Anniversary Mass at St Michael's Abbey: 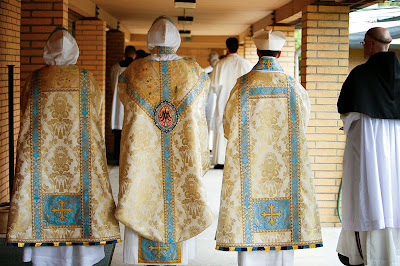 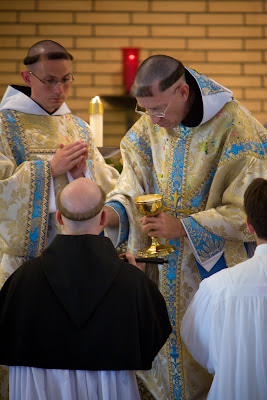 For those who would like another view of the vestments, which are simply superb, here is one which shows the subdeacon in tunicle with humeral veil: 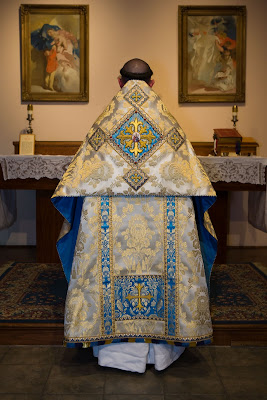 Blessed be God Thrice-Holy, in His angels and His saints, there is good news for CRNJ, as they now have a new home (on a 2-year trial) in the hills of West Virginia. Now is the time for all good men who cherish the cause of Catholic tradition in the States to support Dom Daniel Augustine in his new venture, as no doubt he and the men of CRNJ will be struggling to meet the demands of transitioning from Silverado, CA, to Charleston/Wheeling, WV.