Today is the anniversary of the Coronation of Queen Elizabeth II in 1953. 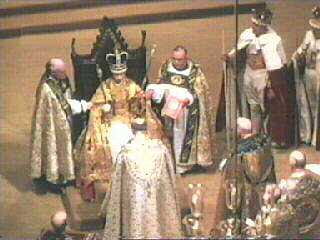 For me, and I suspect most people then alive this provided a rich fund of images which have endured in our memories.
My earliest more-or-less datable memory is one of my father coming home with a commemorative mug produced by the local council to mark the occasion. The Coronation itself I do not recall. As a twenty-two month old I was taken to watch it on my grandmother's television, and, in a grave dereliction of duty as both a loyal subject and as an historian slept through the entire proceedings. I had to wait to watch the whole broadcast until New Year's Day 1977 when, to celebrate the Queen's Silver Jubilee that year, the BBC, in an inspired choice, transmitted the recording of the whole of the proceedings from June 1953. 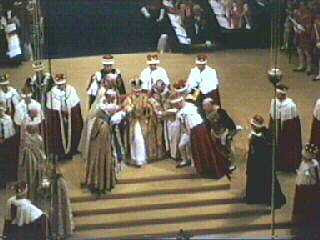 Quite apart from an academic interest, nay, fascination, with the ritual of the crowning of the monarch - nourished from my early years by a splendid volume on the 1953 Coronation we had at home - I remain absolutely convinced of its centrality to the life of the nation. This is elegantly summed up by Fr Aiden Nicols in his recent book The Realm - his passage on the significance of the royal inauguration is well worth looking at.
I very much regret the amputation of parts of the ceremonial by the Reformation and in 1831 - though successive Coronations have restored parts of that, and there has been speculation that more might be restored at future one. By the way, I would also restore the Scottish Coronation - last performed in 1651, with very maimed rites
I also deplore the decision of some ancient European monarchies to abandon such rituals - as with Sweden and Norway in the twentieth century, not to mention the Papacy. Obviously I also deplore the loss in the same grim century of the very institutions which had coronations in Hungary, Roumania and Russia.
Today is a day to give thanks for the immense benefits of living in a sacral monarchy, as well as for the person of The Queen, and her fulfilment of her Coronation Oath and discharge of her office and ministry.
Posted by Once I Was A Clever Boy at 19:41