The other day I reproduced a reconstruction of the monastic buildings at Dorchester by Dominic Andrews from his site www.archeoart.co.uk .

This is a very attractive source of historical reconstructions. I have always been drawn to such workd, and as a boy used to attempt drawings of the castle, priory, and other vanished buildings in my home town - as the title of the blog says, once I was a clever boy...but enough about me.
Here are one or two more examples of Dominic Andrews' work, chosen because they reflect my own high medieval enthusiasms - there are many more on his site from earlier and later periods.

In the sixteenth century, Malmesbury Abbey in Wiltshire was stuck by lightning, causing the spire and tower to fall and demolish half the church.

The 431 feet tall spire, taller than that of Salisbury cathedral (404 feet), and the tower it was built upon, collapsed in a storm around 1500 destroying much of the church, including part of the nave and the transept. The choir was a casualty of the dissolution of the abbey. The west tower fell around 1550, demolishing the three western bays of the nave. This was probably due in part, as with the west tower of Hereford cathedral which collapsed in 1786, to it having been up on pre-existing arcades and walls rather than from the ground on solid foundations. As a result of these two collapses less than a half of the original building stands today. The white part on this other reconstruction drawing shows how much, or perhaps one should say how little, survives of the abbey church today, and can be compared with the photograph of the building: 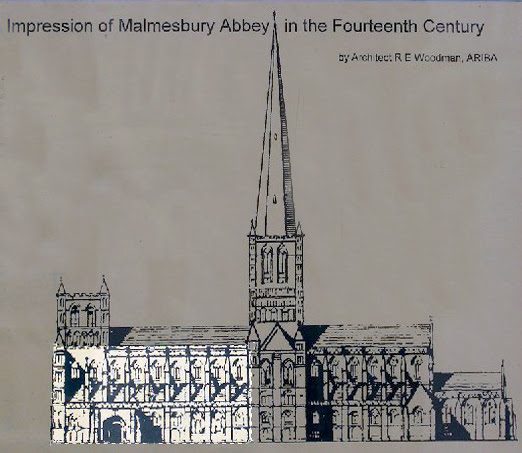 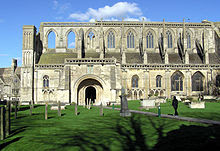 All of which makes one realise something of what we have lost since the medieval period, which is, of course, an aim of artists who do such work.