Last night's Solemn Mass at the Oratory was the main celebration for St Aloysius here in Oxford.

As something of a surprise we had a Pontifical Mass with Bishop Peter Elliott, a long- standing friend of the Oratory. I gathered that he just happened to be in Oxford and was recruited at short notice. We had an excellent sermon from Fr Simon Bishop S.J., the Chaplain to the University. This brought out the lessons that can be applied by everyone in their own lives from the example of St Aloysius' life,and concentrated on the future saint's remark to his father when he told him of his vocation: I am made for greater things.

After the Mass, and on the way to the splendid buffet supper there was an opportunity to admire the completed work on the statue of our patron saint. I am basically reproducing, with a few alterations, the piece about it from the Oratory website, and would add that I have a personal interest in this in that I found at an auction the pillar base on which St Aloysius now stands. It fits in so well I wonder if it had wandered from the church at some point in the past. The capital is just visible. The statue is a handsome piece, and representitive of the way St Aloysius is usually depicted 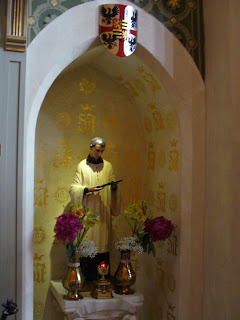 ... the statue of St Aloysius in the Relic Chapel has now acquired a splendid shield of the Gonzaga arms by Tom Meek. The original statue was wood, from Ammergau, and was mysteriously sold away just before the Oratory came to Oxford. The one we have now was given to us by the nuns of Oulton Abbey, and recently restored by Richard Pelter's team from IFACS. With the ihs and sa monograms on the background, it is a little reminder of four hundred years of Jesuit ministry in Oxford, from Fr Edmund Campion to Fr Richard Manners SJ.
Posted by Once I Was A Clever Boy at 10:36

Now that (in the picture) looks wonderful. The mounted coat of arms is an excellent touch. Kudos to the Oratory Fathers.