Few events in human history, even allowing for the dangers of post hoc ergo propter hoc reasoning, have had as direct an impact on the lives of everyone ever since as the assassination of Archduke FranzFerdinand and his wife in Sarajevo on this day in 1914. 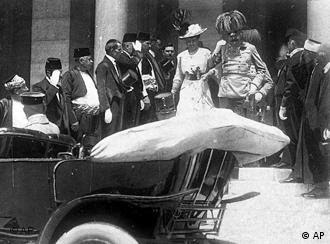 With those two pistol shots the world changed forever, whether we like the fact or not. In those split seconds the modern political world was born. We were and are all affected by what happened that morning. At that moment an older world, founded on traditional perceptions was symbolically as well as literally shot down by the forces of disorder and revolution.Whatever devil's brew of Bosnian history lay behind the actions of the plotters they fell into the dangerous trap of believing that one person can and should be punished for grievances, real or imagined, in the past as much as the present - things for which their victim was hardly responsible. They had the dangerous delusion that the violent overthrow of a traditional order will produce something better. It doesn't. It will almost certainly result in horrors far worse than before.

Whatever the military arguments about Austria's policy in the Balkans and how to respond, the assassination of the heir to the throne of the Dual Monarchy was an assault upon the very principles upon which it was based - Franz Ferdinand may not have been popular with many in Vienna or Budapest, but he was the next in line to the throne which held the whole together. The evidence since 1918 suggests that such a Danubian union was no bad thing.

The car leaves the Town Hall on its fatal journey
Last year I read David James Smith's One Morning in Sarajevo, which is an eminently readable account of the events. Published in 2008 It is based on established research plus insights he has derived from visits recently to Bosnia, and contact with relatives of some of the conspirators. Written with pace and a feeling for the locations it has something of the sense of a film or television script which engages the reader's attention. In all that it builds upon Vladimir Dedijer's classic and magisterial The Road to Sarajevo of 1967, although Dedijer has far more about the background - I am in the course of reading it at the moment. Smith has, however, been able to use a definitive account of the trial of the conspirators, which was not available in a full edition in the 1960s.

Smith is fair minded and even-handed, though I would be less inclined to the human sympathy he at times shows towards the Young Bosnian terrorists.

What emerges from his interpretation is, amongst others, a group of young radical nationalists engaging in "gesture politics" - the Archduke is coming to Sarajevo - one of us ought to try to kill him - appears to have been part of their reasoning. Princip himself showed no remorse for the death of the Archduke himself and excused his responsibility for the Great War by saying it would have happened anyway. Others were typical of a certain type of political fanatic - family men with settled careers who were driven by political extremism to terror with unimaginable consequences, yet men seemingly rather surprised to be brought to account for what they had done.

What is also terrifying is the way in which a series of misadventures allowed Princip to be where he was and given the opportunity to shoot. The actions leading to the assassination and the events of the day itself, let alone what happened during the next month, open up a whole range of "what ifs" and "if onlys". I am no great believer in 'counter-factual history' per se, but here such thoughts do bring to mind the range of possibilities that might have happened, with very different consequences.

Whether or not a world war would have broken our sooner or later is, in my opinion, open to question - I am not an inevitabilist - and Smith points to indications of a desire on the part of European leaders to defuse international tensions by 1913. Princip's shots were to prove fatal to that hope - they had the effect of bringing the house down, whether or not it was destined to fall. To blame the war on impersonal forces, however much they contributed to the mind-set of the day, is to deny personal responsibilty for individuals' actions, and their consequences - forseen and unforeseen. That applies to the choices made by political and military leaders in the wake of the assassination, but it must also, definitively, apply to the conspirators. Had there been no assassination we cannot be sure there would have been a conflict anyway. There is no escape clause there.

Since Dedijer wrote the union of the South Slavs as Yugoslavia has disintegrated, and Smith highlights this and its consequences. He also informed me of something I did not realise, that the last of the conspirators,Vaso Čubrilović, only died in 1990. Perhaps Smith's most chilling, or shocking, quotation comes from a Muslim Sarajevo taxi driver who when asked by Smith to take him to the conspirator's graves - once a shrine to Slav nationalism, but now largely shunned and neglected - said "Why do you want to go there? If it had n't been for them we'd still have been in Austria and better off." Thus two world wars, the terrible events in Yugoslavia between 1941 and 1945, post war reprisals, years of Tito's rule, the disintegration and fighting of the 1990s and since, the still unresolved questions, the years of human misery of flight and exile, misery and oppression, brutality and murder, not to mention what has happened to Europe and the world - all are somehow put in a context that challenges all of the decisions and choices made since 1914.

The bodies of the Archduke and Duchess lying in state
As I read these detailed accounts of what happened, so minutely recorded - including a photograph taken only seconds before Princip fired - you can see the car wheels turning to take the car along the original not the revised route, which gave the assassin his chance (and much more interesting than who might or might not have been on the grassy knoll in Dallas in 1963), I felt a mounting, palpable urge to shout out "Don't shoot!" Mentally I did, yet I know, of course, it echoes down a void of almost a century, unheeded.

I would urge anyone interested to read not only Dedijer or Smith but other books on the last years of the Austro-Hungarian Empire - to understand what happened, and indeed what might have happened, is to understand more about the way our civilisation has gone in the last century. To ask questions about what happened, and why, and was it all avoidable is, I have long believed, important. However one interprets those years, whoever you are inclined to support, in the choices being made one sees much more then "mere" political or military history.

The Archduke's funeral procession in Vienna

Pray for the repose of the soul of Archduke Franz Ferdinand and Duchess Sophie, and for all those affected by their deaths, both departed and living - which is, lest we forget, all of us.

thr last one photo os not Vienna but Trieste