The Crown of Romania

A friend has pointed out to me that March 26th was the 72nd birthday of HM Margareta Custodian of the Crown of Romania and was also the 140th anniversary of the proclamation of Romania as an independent Kingdom in 1881 under King Carol I, who had been Prince of the united principalities of Moldavia and Wallachian since 1866. At the the cost of losing part of Moldavia to Russia at the Congress of Berlin in 1878 they had then become independent of Ottoman suzerainty. After the Great War the Kingdom expanded to recover what is now Moldova together with gaining Transylvania. 1940 and 1945 saw further border changes.
There is an online biography of HM Margareta at Margareta of Romania
I have copied the following piece about the Royal arms from A Royal Heraldry. There is a much more detailed account at Coat of arms of Romania 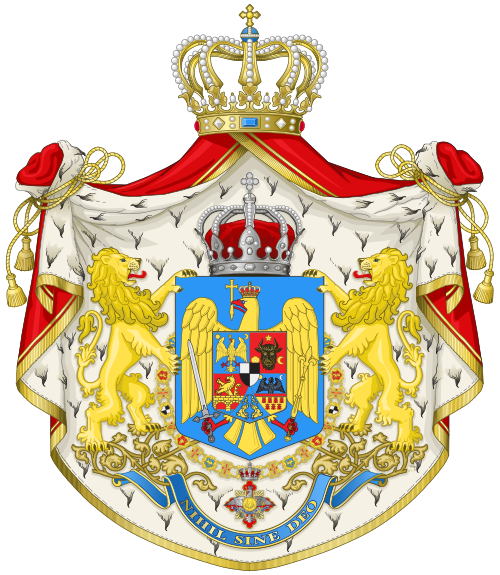 The Romanian Royal Coat of Arms as adopted in 1921 represents the regions of Romania with the Hohenzollern Family Coat of Arms (Quarterly white and black). King Michael's grandfather, King Ferdinand, was born a prince of Hohenzollern-Sigmaringen before succeeding his uncle King Carol I shortly after the start of World War I in 1914.
On top of the achievement as a whole is an heraldic crown in the Continental style. On top of the Shield, however, is a representation of the Steel Crown, the coronation Crown of Romania. This was made for King Carol I of Romania and was forged at the Army Arsenal in Bucharest from the steel of a cannon captured by the Romanian Army from the Ottomans during the War of Independence (1877-1878). Carol I chose steel, rather than gold, to symbolize the bravery of the Romanian soldiers. He received it during the ceremonies of his coronation and of the proclamation of Romania as a kingdom in 1881. It was used again in 1922 at the coronation of King Ferdinand I and Queen Maria as sovereigns of Romania, which took place in Alba-Iulia and also during the coronation and anointing as King of Michael I by the Orthodox Patriarch of Romania, Nicodim Munteanu, in the Patriarchal Cathedral of Bucharest, on the day of his second accession, September 6, 1940.
The Royal Standard below is a fine example of late Art Nouveau/Jugenstil style. 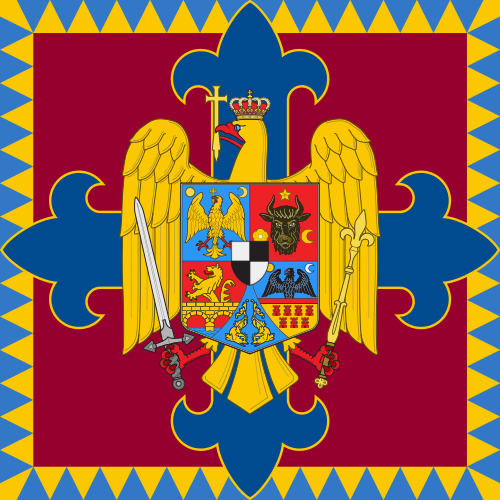 Text (adapted)
and images: aroyalheraldry.weekly.com/Wikipedia
Posted by Once I Was A Clever Boy at 21:20

It is very important to understand the importance of the Crown in terms of the creation of the modern Romanian state. So important that the Republican regime has reached a formal understanding with the Royal Family in terms of recognising titles, public funding & Royals being part of the state. Royal House became a Public Utility as of May of last year. From 1997 onwards relations between successive governments & the Royal Family have gradually improved & the role of Royals in that nation has expanded.

It is interesting that Montenegro is a hybrid of Monarchy & Republic, Albania recognises it's Royal House via a vote in Parliament & issuing them diplomatic passports, the Serbian State pays its Crown Prince a Government Salary & that Croatia never banned aristocratic or Royal titles post 1919 meaning Habsburg dynasts can get passports there describing them as Archdukes & Archduchesses. Since 2013 Russian Orthodox Church has recognised Grand Duchess Maria as rightful Head of their Imperial House.

All of that on top of the Romanian decision last year points to interesting cohabitation between Royalty & Republics in the Balkans. Especially with the continuing role in Greek public life of their Royal House & the courts letting The Czar of Bulgaria keep his Palace.

All very interesting. Am very thankful for this thought provoking blog post which reminds us that Eastern Churches are certainly upholding Royalty as part of their Church model. In Bulgaria their Church recognises The Czar & encourages prayers for His Majesty since 2013. They even dedicated a Church to His Majesty Simeon II too.