St Chad, his relics and churches

Today is the Feast of St Chad, the first Bishop of the Mercians at Lichfield and the patron of many churches both old and not so old across both the ancient diocese of Coventry and LLichfield and beyond. In one of these, the nineteenth century Metropolitan Cathedral of St Chad in Birmingham, his surviving relics repose in a chasse above the High Altar. Rescued when his shrine at Lichfield was despoiled in the mid-sixteenth century the surviving bones were handed down by recusants until they found a new and splendid home in Pugin’s great church in Birmingham. The concern of these Catholics to preserve the relics is a testimony to their fidelity to the devotional practices of the Church and to their belief that better times could, or indeed, would come. 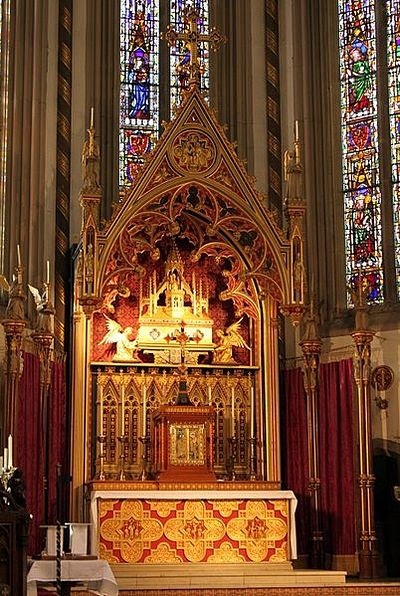 The High Altar of St Chad’s Cathedral in Birmingham with the shrine of St Chad.
Image:James Bradley/orthochristian.com
There is an online account of the life of St Chad at Chad of Mercia from Wikipedia. Another excellent biography and study of his cult, handsomely illustrated and including pictures of not a few of the historic churches dedicated to him can be found on the Orthodox Christianity blog by Dimitry Lapa at Holy Hierarch Chad of Lichfield, Apostle of Mercia, Wonderworker
The Clerk of Oxford has a post about St Chad, quoting St Bede’s account of his death in 672, at St Chad of Mercia
The story of the survival of his relics can be seen on the St Chad's Cathedral website at The Relics of St Chad and the story is also narrated, and illustrated from the stained glass in St Edward’s Chapel in the cathedral by Patrick Comerford at How Saint Chad’s relics were removed from Lichfield and are now in Birmingham
I have posted about St Chad and his churches in the past. My posts Churches of St Chad from 2013 and St Chad's Day from 2015 concern churches dedicated to him, particularly one in which my ancestors must have worshipped - at least some of them.
However I see that some of the pictures I had copied to illustrate the pieces have disappeared. Rochdale church is illustrated on the Orthochristian post. The painting of the old church of St Chad at Saddleworth and the Rushcarting ceremony circa 1826 by John Holland has also disappeared from the post, so I am reposting it here: 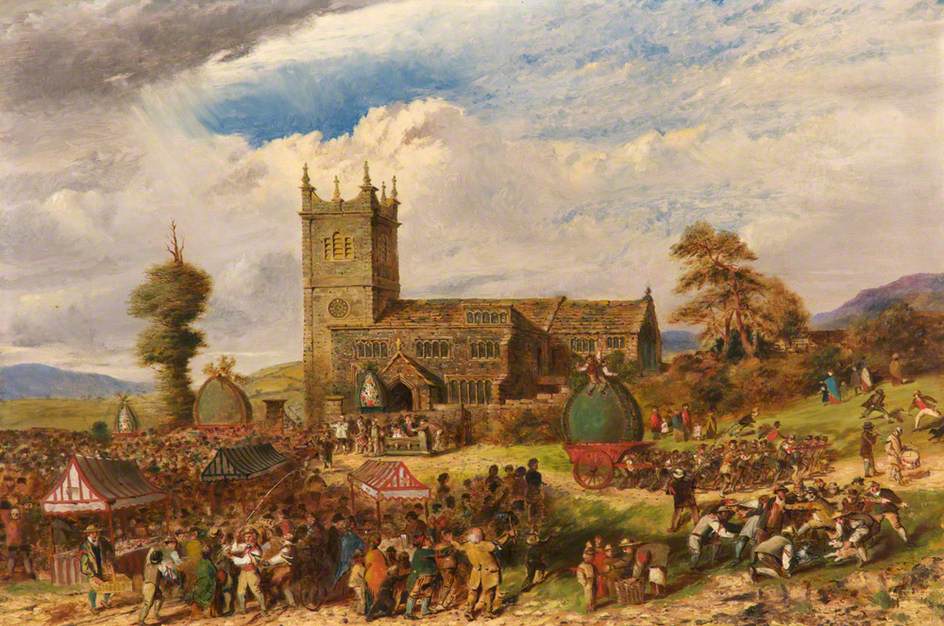 Image: Saddleworth Museum/Art UK
Posted by Once I Was A Clever Boy at 21:29