The Most Illustrious Order of St Patrick

The Duke of Cumberland, later King Ernest Augustus I of Hanover, in the robes of the Order
Image: Wikipedia 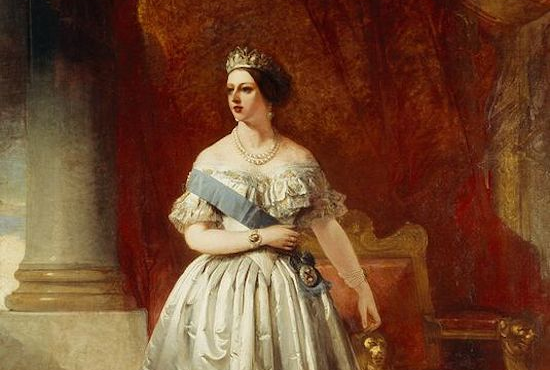 Queen Victoria wearing the Order of St Patrick.
A detail from the 1854 portrait of the Queen by Stephen Carterton Smith, painted to commemorate her visit to Dublin in 1849. The painting is in the Mansion House in Dublin. The Queen is shown wearing the Oriental Circlet, which is still part of the Royal Collection.
There is a fine photograph of the Duke of York, later King George V, wearing the riband and star from the time of his installation as a Knight of St Patrick on his visit to Dublin in August-September 1897 here
Photographs of King Edward VII wearing the riband and star of the Order with his Field Marshsl’s uniform at Viceregal Lodge on his visit to Dublin in July-August 1903 can be seen from the Royal Collection at Image: Newton Wynne Apperley (1847-1925) - King Edward VII and Queen ... and at HRH Princess Victoria (1868-1935), 2nd daughter of King Edward VII; King Edward VII (1841-1910); Queen Alexandra (1844-1925).
It was on the eve of the King’s next visit in 1907 that the Irish Crown Jewels - the diamond star and badge of the Order worn by the Lord Lieutenant - were stolen from Dublin
Cadtle

The late Duke of Gloucester, who died in 1974 was the last Knight of the Order. He was appointed to it in 1934. He wore the insignia of the Order on visits to Northern Ireland - his secondary title was Earl of Ulster

Today The Queen, as Sovereign, is the only member of the Order - the last non-royal Knight died in 1961 - but so far as I know Her Majesty has never worn the insignia of the Order on her visits to Northern Ireland.

and Badges of the Order of St Patrick (2017)
I always make in these posts the case for restoring the Order to its proper place amongst the Sovereign’s Orders of Chivalry. It could serve not only as a means of honouring those from Northern Ireland but also on a cross-border basis as a recognition of shared identity and heritage with those based in the other twenty six counties. It could be a way of building bridges in a symbolic way.
I know I am not alone in this opinion from talking with friends. It is more widespread than that. Here is a letter to the The Times from 2004 on the subject: Time to revive Order of St Patrick.
Since that was written there has been the exchange of State Visits and other gestures of reconciliation, Brexit not withstanding. There is a strong case for reviving the Most Illustrious Order of St Patrick.
Posted by Once I Was A Clever Boy at 14:44