Today is the anniversary of the death in 604 of Pope St Gregory the Great, and it is still his feast day in the Extraordinary Form of the Roman Rite. 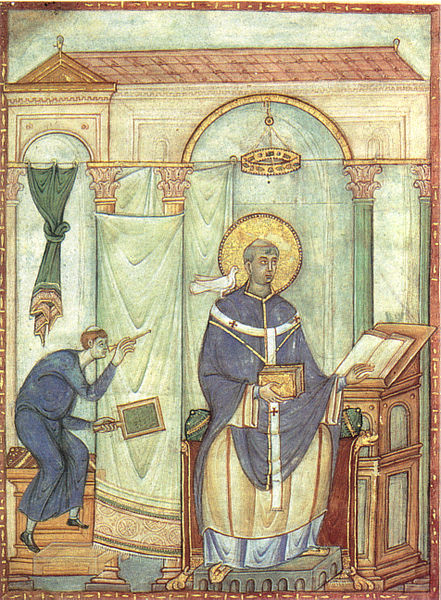 Saint Gregory the Great dictating his homilies on Ezekiel under the inspiration of the Holy Spirit. His secretary is observing through the curtain the presence of the dove.
The Master of the Registrum Gregorii (a collection of the letters of Gregory the Great). Dated to 983 or later. Trier Stadtbibliothek.
Image: Wikimedia
In England, and especially in the Anglo-Saxon age, he has been venerated as the Apostle of the English for his concern and determination to send a mission to convert the various Germanic tribes who had established themselves in what had once been the Roman, and Christian, province of Britannia.
Pope St Gregory’s practical concern for not just the English mission but for the whole Church is revealed in his letters, marked by their practical and pragmatic common sense yet without ceasing to uphold the unity and doctrine he was committed to maintaining. This was by no means easy given the conflicting pressures and claims within the Church, and the political pressures he was often under, as well as suffering illness.
There is a good, if occasionally diffuse, account and introduction to his life and achievements as author, liturgist, promoter of mission, and as the Pope who can be seen as establishing the basis of the medieval Papacy territorially, administratively and constitutionally, on Wikipedia at Pope Gregory I. This includes a description of his appearance and that of his parents from a contemporary fresco, which makes it easier to visualise him as a living person. Amongst other aspects of his life that it discusses is his educational formation as a young Roman patrician. the extent to which his time in Constantinople not only gave him an understanding of Byzantium and its limitations, but which also marks a stage in the divergence of east and west in the history of the Church.
In his biography of the saint R.A.Markus contrasts him as a writer with St Leo the Great. For Marcus Leo was the greater Latinist but Gregory the more influential. I would agree in that St Leo as the first great expositor of Papal claims and as a preacher is always stylish and energising for the reader even in translation. St Gregory a century and a half later is further removed from classical culture and his writings quite often seen plodding and to be using convoluted models of symbolic numerology and suchlike. However the frequency of his appearances in the breviary readings and the widespread diffusion of the Moralia and its influence indicate his continuing influence and legacy. He is not only a Doctor of the Church as a theologian but also as an administrator the father of Roman centrality.
There is an article by Graham Nicholson, and accessible through Medievalists.net, about St Gregory’s understanding of the concept and reality of Papal Primacy at The Understanding of Papal Supremacy as revealed in the Letters of Pope Gregory the Great 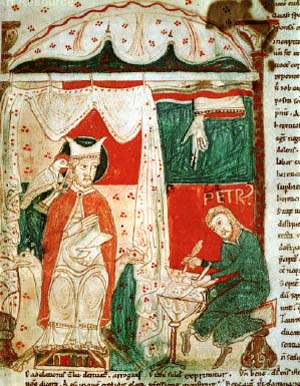 Gregory the Great dictating to his scribe Peter from a copy of the
Moralium of St. Gregory, 12th century
Image: Tradition in Action 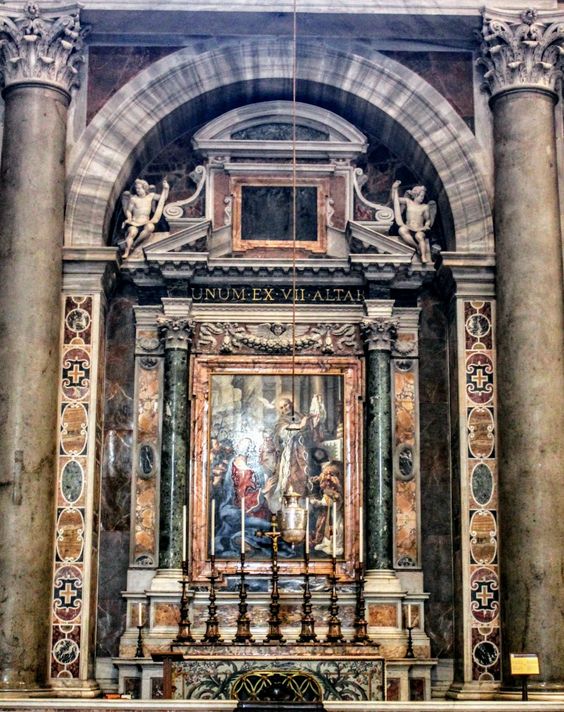 Altar of St Gregory the Great in St Peter’s in Rome
The painting is a copy of one by Andrea Sacchi (1599-1661) and depicts The Mass of St Gregory.
Underneath the altar in a white sarcophagus are the mortal remains of St Gregory
Image: walksinrome.com
St Gregory Pray for us
Posted by Once I Was A Clever Boy at 20:46