Today is the anniversary of the regicide of King Louis XVI in 1793.
The Special Correspondent sent me a photograph to mark this solemn day of a statue of the King in Bordeaux. Unfortunately this will not reproduce here on the blog but an almost identical one can be found in the Wikipedia link below.
The chequered and controversial history of the statue, commissioned for the city of Bordeaux in the 1820s, its relegation to a museum and its destruction in 1941 is set out in a Wikipedia article in both French and a slightly stilted English translation at Louis XVI (Nicolas Raggi)
The fate of the Bordeaux statue strikes a regrettably familiar note in the current culture and I find that the statue of King Louis XVI in Louisville Kentucky has attracted protesters in recent months and has been removed for cleaning and restoration. The city was given its name by the American rebels in 1778 upon hearing of French support for their cause. For the French this attempt to gain redress for their losses in the Seven Years War brought no tangible gains but an increase in the indebtedness of the government, leading to the initial crisis of 1788-9. There is a YouTube report about the removal of the statue at King Louis XVI statue removed from downtown Louisville
On a more positive note the Eurohistory journal blog has a report from last year about the Mass for the King and the victims of the Revolution held in the Chapelle Royale at Dreux. This was attended by the Count of Paris - King Jean IV - and his family. The liturgy included a formal prayer by him for the forgiveness of King Louis XVI for the actions of the Duke of Orleans as Philippe Egalite. This can be viewed at Prince Jean, Count of Paris, Asks King Louis XVI for Forgiveness for the Sins of Philippe Égalité 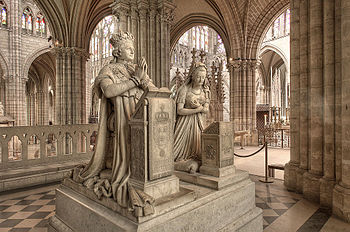 The memorial to King Louis XVI and Queen Marie Antoinette at St Denis
Image:Wikipedia
Posted by Once I Was A Clever Boy at 16:30

Excellent blog post here. An astute way to remind folk of the continuing Royal legacy in Republican France. We see here that flippantly spurning the past & it's symbols is self evident folly as it prevents us from learning the lessons of history. All in all a worthwhile post for which the author is to be commended. The fate of Louis XVI is an indictment of the so called enlightenment ideals which fuelled the revolution.