A fragment of the Harry Crown?

The Mail Online has an article about what appears to be a very significant, if perplexing, discovery by a metal detector in a Northamptonshire field near Market Harborough which may link to one of the greatest lost treasures of England.
I had seen something before about this item, but it was very interesting to read more about it with illustrations. The two and a half inch high gold figure is of King Henry VI and appears to be a sole survivor of five figures which decorated the ‘Harry Crown’ which was destroyed along with virtually all the rest of the regalia - barring actual jewels and the Ampulla and spoon - in 1649. The illustrated article can be viewed at Metal detectorist finds £2million jewel of Henry VIII's lost crown
This includes a photograph of the statuette and a link to a good video about the reconstruction of the crown in 2012 and an interview with a fellow Orielensis and friend Dr Kent Rawlinson who is now curator at Hampton Court.
Our knowledge of what as called the Harry Crown or the Imperial Crown comes from the account made when it was destructive, from records of alterations to it in the sixteenth century which have been published in recent years and especially from the paintings of Van Dyck and others, where it so often sits on a table at the elbow of King Charles I. 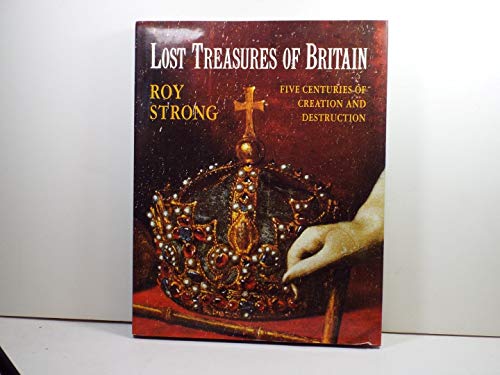 This shows the back of the crown. The figurine on the fleur de lys is of the Virgin and Child.

A few years ago the reconstruction was made of the crown in its final form and it can be seen at Hampton Court in the Royal Pew. Excellent as it is I think it misses some of the subtleties conveyed by the paintings, unless that is the contest between paint and photograph.
Unfortunately all the Historic Royal Palaces photographs of it obstinately refuse to be downloaded, so you will have to search online for pictures of the replica. This can be seen in the Mail Online article. One to look out for shows the crown from the side and the odd alignment of the arches with the circlet brought about by the latter having five crosses and five fleur de lys, unlike its successors.
The article about the discovery of the figurine, is unfortunately a bit silly at times  - no one surely imagines that the King was wearing the crown as he retreated after Naseby, or that he stopped to bury one figurine. The regalia, like its successors, was kept in the Tower of London. Nor am I at all certain about the reported changes to the figures in the time of King Henry VIII. The little statuette looks to be from the time of him or perhaps even more likely his father, who actively pursued the cause of King Henry VI for canonisation.
How the figurine got to where it was found is one of those historical mysteries that will doubtless never be solved as nothing presumably was ever committed to writing about it. Did someone keep the tiny figure as a souvenir? That might imply that a zealous, or not so zealous, Puritan of one of various different configurations, saved a graven image of a saintly king. Doubtful. Did someone light fingered merely make off with it and then lost  it? More likely. In losing it he did of course save it for posterity.
There is a reasonable account of the Harry Crown on Wikipedia at Tudor Crown. I think there is more to be said about it than the article actually does; note 1 in it refers to another, lighter, crown made for King Edward VI and used by his two half-sisters and shown in the Coronation portrait of Queen Elizabeth I.
In 2019 I gave a lecture on the Harry Crown to the Oxford University Heraldry Society. If anyone is interested in hearing it, complete with splendid illustrations, and once one can travel and meet up, please get in contact. I would be happy to oblige.
Without spoiling too much of my thesis I would argue that the Harry who commissioned the crown was not either King Henry VII or King Henry VIII, but King Henry V. The crown was certainly altered in terms of adding or removing jewels by different monarchs as can be seen from the written record. That is also true of its current successor the Imperial State Crown since it was made in 1838 which had had its profile raised and lowered, jewels added, as well as an entirely new frame and minor adjustments to fit the heads of monarchs.
The gold statue appears destined for the British Museum and thus will be seen. I do wonder if however it could find an even more appropriate home at the Tower of London alongside the present regalia.
Posted by Once I Was A Clever Boy at 21:08