Ten years of the Ordinariate

Two days ago I watched the live-streaming of the Mass of Thanksgiving celebrated by the Ordinary, Mgr Keith Newton, for the tenth anniversary of the Personal Ordinariate of Our Lady of Walsingham under the patronage of St John Henry Newman. The Mass was offered in the Church of the Assumption of Our Lady in Warwick Street, or as I am perhaps prefer to call it, the Royal Bavarian Chapel.
When the Ordinariate was being set up being a convert of several years standing and knowing some of those who were entering into the Church through this new organism I was anxious to support both them and it. As a result I went along as a supporter to their initial meetings, reception ( I was a pro-sponsor for one couple ) and to Masses celebrated at Pusey House and then at Holy Rood. I regret that I was not able to do more in practical terms to assist in its early years. One thing I did do was to be an apologist for the Ordinariate to some lifelong Catholics who were perhaps wary or apprehensive of this new institution, a group rather than individual conversion as so many others of us had undertaken. I hope that in so doing I helped smooth the path.
Here in  Oxford with Mgr Burnham, Fr Hunwicke and, following his ordination, Fr Lloyd the Ordinariate was seemingly well placed to attract more members in the home of the Oxford Movement. Unfortunately many of those who might have joined had, like myself, already crossed the Tiber and were well established in existing Catholic parishes or communities. Others who might have been seen as likely candidates remained in their existing Anglo-Catholic churches. One can respect their fidelity to the traditions and places which had formed them, but to me it seemed a missed opportunity to live out the logic of their core beliefs in an advantageous ecclesial arrangement. In consequence the Oxford Ordinariate community has not, so far, achieved the numbers one might have expected in the city. In other Anglo-Catholic centres the Ordinariate has, I think, had more success in reconciling people. I have several friends - two of them ordained - who since the creation of the Ordinariate have been received as Catholics but chose the existing diocesan route rather than the Ordinariate. There is no one road to Rome.
Mgr Newton in his homily on Saturday acknowledged that things might have been done differently - indeed what human  organisation with proper self-knowledge could not say that, though many do not - and I think that was a wise note to sound. I suspect there was not always as vigorous attempts to attract Anglo-Catholics into the Ordinariate as there might have been. It was perhaps seen an “not done” to spell out the implications both of what was on offer and of not taking it up. As I wrote above the fact that many did not feel themselves to be drawn away from their accustomed places of worship was something of a surprise, much as I know and understand the emotional hold specific churches do have for individuals. The rumours that Pusey House would join proved illusory - but what a difference that would have made.
A second, and in practical terms difficult, issue was that of finding suitable churches and times for Mass. Anglicans are not used to fulfilling their Sunday obligation on Saturday evening. What is needed ideally are Ordinariate churches, as in Warwick Street and one or two other places, which can offer service times that fit with congregational expectations and that can be “owned” as a parish church, rather than shared liturgical space. This of course requires adequate funding as well as suitable buildings.
Although I had not attended Ordinariate Masses for a while before the current restrictions came into force I still wish it well and believe it can offer a positive way of making the transition to the Catholic Church for those who already hold its tenets but are within the Anglican communion, and who are keen to preserve their particular heritage. It should perhaps be said that some who have been part of the Ordinariate have become fully used to the mainstream Roman liturgical books and adjusted accordingly. We must see what the next decade brings to this striking initiative. 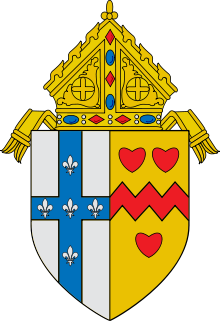 Coat of Arms of the Personal Ordinariate
of Our Lady of Walsingham
Image: Wikipedia
Posted by Once I Was A Clever Boy at 20:32

My sense is that Fr Lloyd has done an excellent job of trying to witness to Our Lords teaching in Gethsemane that 'They may all be one.' This Fr Lloyd has done by virtue of being not just bi- ritual but tri-ritual. Fr Lloyd celebrates the Novos Ordo a la the Oratorians & Fr John Saward by doing it in a pretty Traditional way that Pope Benedict XVI would see as a transition to a hopefully more sound liturgical future to honour Jesus better via better worship. Fr Lloyd has introduced his parishioners to the Ordinariate use & the Traditional 1962 Mass without much objection compared to what there could have been. And so in what used to be my local Parish the Ordinariate have served to take the situation away from the sloppy neo 1970s liberalism that prevailed before towards a more authentically Catholic parish in concord with how Our Lords Church traditional approach has been.

This is a superb article & has much depth and content that was obviously produced after lived experience & much thought. I am glad that Pope Benedict XVI admitted the Ordinariate if they can help by God's Grace to spur Traditional practices being used more in the mainstream Church for the praise & glory of God & salvation of souls.