It was on the Epiphany in 1367 that the future King Richard II was born at Bordeaux. The city was the capital of the Duchy of Aquitaine, which had been restored or recreated by the Treaty of Bretigny-Calais in 1361 and which was ruled by Richard’s father Edward Prince of Wales and Duke of Aquitaine on behalf of his father King Edward III. Despite their long tenure of their French lands Richard was the first future Plantagenet ruler to be born there since King Henry II and only King Edward IV was to be so after him.
The circumstances around Richard’s birth are
set out in an excellent, indeed valuable, post by Dr Michael Jones from 2018 on the History Geeks blog and can be read in full at The History Geeks  Much of what follows is drawn from that before I added my own reflections and interpretation. It is worth scrolling down to related articles on the medieval view of the Magi and articles about the burial at Epiphany 1066 of St Edward the Confessor and the misadventures of the body of Queen Catherine of Valois after her burial, also at Westminster, in January 1437.
Prince Edward and his wife Joan of Kent already had a son and heir in Edward of Angouleme born in 1365, so a second son would be, as it is often summarised today a ‘spare’. The birth of this second son may have been to some extent premature as the Princess, worried by her husband’s plan to cross the Pyrenees in midwinter as the beginning of his campaign to restore the exiled King Pedro I to his throne in Castile, apparently went into labour early.
Perhaps for this reason the baby was thought to be in danger of dying and was immediately baptised by the midwife with the name John. As Epiphsny traditionally celebrates three wonders - the visit of the Magi, the Baptism in the Jordan by St John and the Miracle at Cana - St John may well have been the obvious saint to invoke for a boy. Less likely would be reference to the baby’s uncle the Duke of Lancaster or his great uncle John if Eltham, brother of King Edward III.
The baby however survived but at his public baptism on January 8th or 9th in Bordeaux cathedral he received the name Richard. This may have been the intended choice by his parents. The last Plantagenet so named had been Richard, brother of King Henry III and King of the Romans who had died in 1272. The name may have been chosen to recall King Richard I, who had co-rule Awuitwith his mother and extended the Angevin empire south from the Loire to the Pyrenees.
At this first showing to the world of a boy born on Epiphany the legend arose that three kings were present at the baptism. These were said to be the King of Navarre, the exiled King of Castile and the claimant King of Majorca. Michael Jones in his article demonstrates that King Charles of Navarre and King Pedro of Castile could not have been present but that a decade later when Richard was Prince of Wales and within months of succeeding his grandfather the story of the presence of three kings at his baptism and an explicit parallel being drawn with devotion to the Three Kings at Cologne was drawn in Parliament by Bishop Houghton of St David’s.
In reality the baptism of this second son seems to have been a rather understated affair, with the proud father about to head south on campaign, and with none of the recorded celebrations that had accompanied his elder brother’s two years earlier.
I have posted four years ago about King Richard’s birth in Birth of King Richard II although I see I made an error in identifying one king as being that of Armenia: I must have confused his presence with the visit of the then King of Armenia to King Richard in the 1390s - mea culpa
Kathryn Warner has a post from 2018 about Richard’s birth on her Edward II blog at 6 January 1367: Birth of Richard II
Princess Joan’s fears for her husband were not immediately justified as he won his third great battle victory at Najera on April 3rd and temporarily restored King Pedro. However it appears that whilst in Castile that the Prince contracted the illness that eventually forced his return to England and his relatively early death in 1376. One legacy of this campaign is the ‘Black Prince’s Ruby’, now in the Imperial State Crown, which was a gift or payment from King Pedro to his ally.
After 1370, when the Wales family returned to England, Richard was no longer the ‘spare’ but the heir, his elder brother having died in that year. As King Richard II arranged for the removal and reburial of his brother’s remains to England. 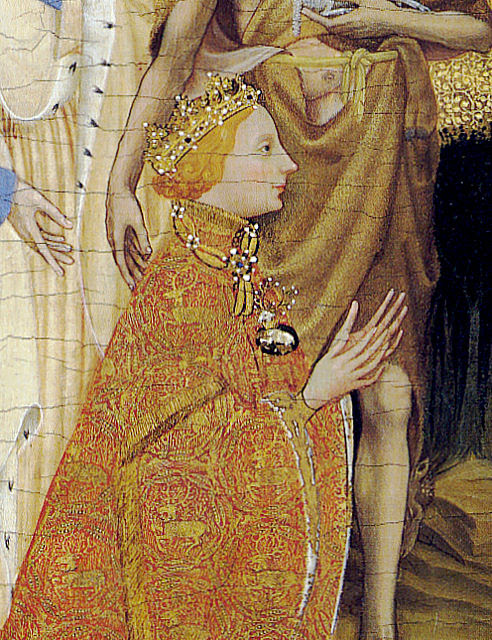 King Richard II from the Wilton Diptych of 1397. He is kneeling in front of St John the Baptist
Image: ReedDesign
As King he showed a notable devotion to St John the Baptist as he records on his tomb commissioned in the 1390s.  In 1395 William of Wykeham gave glass to his new Winchester College chapel showing King Richard kneeling before St John. Although there are searchable images of this fine depiction of regal piety on the Internet they unfortunately refuse to download to this blog. Search for the Flickriver site on the College glass. In April 1399 the King drew up his will, seemingly unaware of his Poland military vulnerability. In it he commend his soul to the Virgin Mary, St John the Baptist and to his other great patron, St Edward the Confessor. 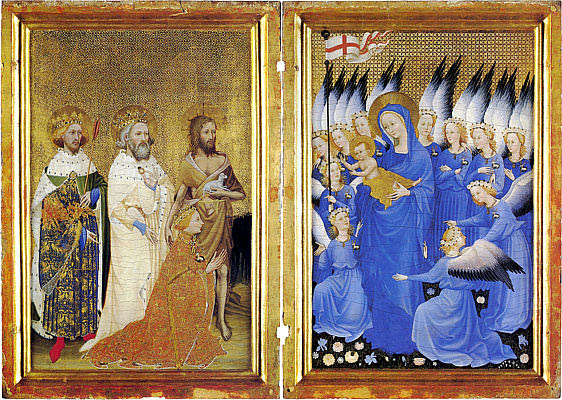 The Wilton Diptych
Image: ReedDesign
These three Saints are in the Wilton Diptych together with St Edmund and King Richard. The complex iconography of Diptych continuation fascinate and tantalise but much can be elucidated. Thus the young King is introduced by St John the Baptist to the Virgin and Child, but the King and his other two sponsors, the English monarchy’s two most prominent regal Saints, Edward the Confessor and Edmund of East Anglia, recall images of the Magi.
The painted decoration of the Chapel of St Stephen in the Palace of Westminster included in a prominent position a scene with the Magi, whilst the celebration of the King’s reconciliation with the City of London in 1394 was celebrated in words that accorded a Christ-like quality to Ricardian rule.
1397 is now thought to be the date of the Wilton Diptych, at the seeming height of the King’s power, yet the ideaswithin its composition can be seen in part to have accompanied Richard since his birth thirty years before.
In the Diptych the Magi-like homage together with the presence of so powerful an intercession as St John conveys an implicit reciprocity of acceptance and the bestowal of sacrality upon the Kkng and his realm. Two centuries later Shakespeare allowed his King Richard II many expressions of that Divinity that doth hedge a king, not least the line that “Not all the rough seas in this wide world can wash tter balm from off the head of an anointed king.” What Shakespeare retold was a world view, a spiritual view that had moulded Richard from his infancy. However much he develop and interpreted it part at least came to him in his cradle at Bordeaux in 1367.
Posted by Once I Was A Clever Boy at 23:45