St William of York and his cult

It is probably fair to say that he is not one of the better known saints of medieval England and today has only a few relatively modern Catholic churches dedicated to him. In the Middle Ages his cult was important at York itself, with his shrine in the Minster, but it never seems to have approached in popularity or significance those older ones of St Cuthbert, St Wilfrid and St John of Beverley in the northern province. There is an online life of him and his somewhat difficult tenure of the See, caught up in secular and ecclesiastical politics, at William of York.

In York Minster his sarcophagus is now in the heart of the crypt created by his successor, Roger of Pont l’Eveque, and in the choir above is the great early fifteenth century St William window which lights the north choir transept, facing that celebrating the life of St Cuthbert in the south choir transept. This dates from before 1414 and is the work of John Thornton who made the Great East window in 1405-8. There is an article about the St William window at Panel of the Month | Vidimus

There is another illustrated article about the St William window, highlighting one particular miracle of deliverance, at https://hortulus-journal.com/reilly/ and the donor of the window, Beatrice Lady de Ros of Helmsley Castle, is featured at whiteroseredroseblog.wordpress.com/2018/02/05/how-much-is-that-doggie-in-the-stained-glass-window/ 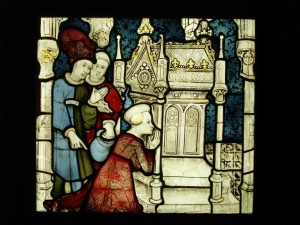 In the Middle Ages St William eventually had two shrines in the Minster. The earlier one, over the place of his original grave, dated to the early fourteenth century and was on the north side of the nave - above the site there still projects a dragons’s head from which was suspended the canopy over the shrine so that it could be raised and lowered.

A reconstruction of the nave shrine
Image: BBC

The second shrine was created in the later fifteenth century in a chapel behind the original position of the high altar, but which in the eighteenth century was absorbed into the sanctuary and the altar moved a bay east. This disrupted the original layout of the choir and presbytery, leaving the altar too far away and removed from its intended position between the St William and St Cuthbert windows.

Both of these shrines of St William were dismantled at the reformation and the bases broken up and buried in the Minster Close. Rediscovered in the 1830s they are now housed in the Yorkshire Museum - not alas the Minster itself - and have in recent years been renovated as other fragments were rediscovered and can be seen again after a period when the gallery in which they are housed was closed. As a boy in the 1960s this gallery in the basement of the Museum, rarely found by other visitors, was a delight to me on visits to York. Here one could lose oneself amongst these and other seemingly little appreciated remains of life in the pre-reformation Minster and other churches. There is a feature about the remains of the shrines ( which strangely manages to give Archbishop William Melton the name Thomas) at St William's Shrine: History of York and an extract from John Crook’s book on medieval shrines about them can be seen at English Medieval Shrines There is a newspaper article about the restoration of the recovered portions of the shrine bases at St William of York shrines on display for first time in 400 years

St William, pray for us