Stephanie Mann on her excellent Supremacy and Survival blog had this post the other day. I have taken the liberty of copying it in full here: 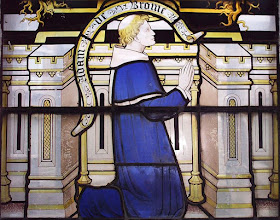 Adam de Brome, the founder of Oriel College of the University of Oxford, died on June 16, 1332 and was buried in St. Mary's the Virgin (then a Catholic Church). His DNB entry is brief:

founder of Oriel College, Oxford, of whose early life nothing is known, was rector of Hanworth in Middlesex in 1315, chancellor of Durham in 1316, archdeacon of Stow in 1319, and in the same year was made vicar of St. Mary in Oxford. He was also a clerk in chancery and almoner of Edward II. In 1324 he received the royal license to purchase a messuage [a dwelling house with outbuildings and land assigned to its use] and found a college in Oxford to the honour of the Virgin Mary. He obtained several benefactions from Edward II for his new foundation, which was to consist of a provost and ten fellows or scholars, who were to devote themselves to the study of divinity, logic, or law. He was appointed the first provost by the king in 1325, and drafted his statutes in the following year. The statutes bear a close resemblance to those which Walter de Merton had framed for Merton College. Brome died in June 1332, and was buried in St. Mary's Church, Oxford.

More about the founder of the college at Oriel's website.

Saint John Henry Newman would succeed Father Brome centuries later as the Vicar of the University Church of St. Mary's the Virgin in 1828, as an Anglican. As this introduction to an article on Newman and Oriel demonstrates, Newman's tenure as Tutor and Fellow at Oriel College was crucial to his development and leadership:

From 12 April 1822 when John Henry Newman was elected a Fellow until 3 October 1845 when he tendered his resignation to Provost Hawkins, Oriel College was to be the centre of Newman's life. As Newman later recorded:

he ever felt this twelfth of April, 1822 to be the turning point of his life, and of all days most memorable. It raised him from obscurity and need to competency and reputation. He never wished anything better or higher than, in the words of the epitaph, 'to live and die a fellow of Oriel'. Henceforth his way was clear before him; and he was constant all through his life, as his intimate friends knew, in his thankful remembrance year after year of this great mercy of Divine Providence, and of his electors, by whom it was brought about.

Newman went on to assert that but for Oriel, he would have been nobody, entirely lacking in influence. It was through Oriel (and the pulpit of the Oriel living of St. Mary the Virgin) that he was able to exert such a dominant religious and pastoral influence on his academic generation and those that followed. It was through Oriel that he would be in a position to emerge by 1833 as the well-known leader of that great movement of religious revival in the Church of England known as the ‘Oxford Movement’ or ‘Tractarianism’ (the name being coined in consequence of the series of Tracts for the Times published by Newman and his cohorts).

And this biographical sketch from the Pitts Theology Library at Emory University also demonstrates how crucial those Oriel years were to Newman:

...In 1822, he was elected as a fellow at Oriel, where he developed a friendship with Edward Bouverie Pusey (Mss. 064). On June 13, 1824, he was ordained as a deacon in the Anglican Church and, at Pusey's suggestion, became curate of St. Clement's, Oxford. In 1825, Newman served as vice-principal to Richard Whatley (Mss. 102) at St. Albans Hall. On May 29, 1825, he was ordained into the Anglican priesthood. From 1826 to 1832 Newman served as a tutor at Oriel College, developing a close relationship with Pusey, John Keble... and Hurrell Froude. From 1827 to 1828 he served as public examiner in classics in the university's B.A. degree program. In 1828, he was appointed as vicar of the university church, St. Mary's. By the late 1820's Newman's evangelical, low-church, views were changing, assuming a more eccleastical, high-church, tone. On March 8, 1830, he was dismissed from the Church Missionary Society because of his opinions on Nonconformists and church control of society. Three months later Newman broke his last ties with the low church when he dissolved his relationship with the Bible Society. From 1831 to 1832 Newman served as university select preacher...

So the founding of Oriel College by Adam de Brome was consequential for Newman, the Oxford Movement, and the Catholic Church. Oriel College certainly celebrates their former fellow and chaplain.

Image Credit: An image of Adam de Brome in a stained glass window in the hall of Oriel College, Oxford.

The Clever Boy would add that the DNB  does less than justice to Adam’s skills and verve as a college founder. Adam de Brome’s grave slab survives in the church and was resited on a tomb chest by Oriel in the 1930s. He is the only medieval founder of an Oxford college to be buried in the city.