The birth of Henry of Bolingbroke


Today is the 650th anniversary of the birth of the future King Henry IV at Bolingbroke Castle in Lincolnshire. At that time he was heir to the vast estates of the Dukes of Lancaster, and in line of succession to the Crown, but his accession in 1399 could not have been expected.

His parents were John of Gaunt, Duke of Lancaster and his first wife Blance of Lancaster. There is an online account of her life here. Blanche died the following year so young Henry would have had no memory of her. The link about his mother details his siblings, of whom two elder sisters lived but three brothers and another sister died in infancy. 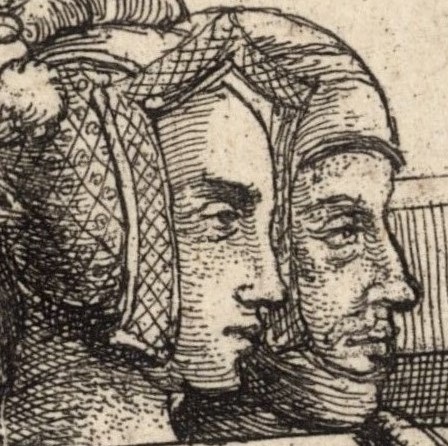 Blanche of Lancaster and John of Gaunt
The effigies on their tomb in St Paul's Cathedral, as depicted in 1658 by Wenceslaus Hollar. The tomb itself was built between 1374 and 1380, and destroyed in the Great Fire in 1666. Anachronistic inaccuracies include Blanche's early 16th-century-style gable-headress, although that might be a result of renovation in the time of King Henry VII, and is not that dissimilar to the headress worn by Queen Philippa on her tomb at Westminster

The castle was built by the Earl of Chester c.1220 to a typical thirteenth century plan and survived until it was demolished in 1652. Today only foundations remain and the moat is no longer water-filled. There is more about its history at History of Bolingbroke Castle | English Heritage and at Bolingbroke Castle

The plan of the castle 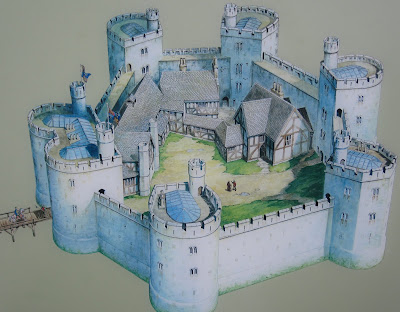 A reconstruction of the castle in the fifteenth century

A reconstruction of the gatehouse

The last standing fragment of the castle before its collapse


The castle at Bolingbroke was not one of the principal residences of the Dukes of Lancaster like Hertford, Kenilworth, Leicester and Pontefract, and that may be why it was chosen for the Duchess' lying-in, as somewhere quiet and tranquil.  Similar reasoning may explain the popularity of the manor house at Woodstock for the birth of royal children.

1n 1367 April 15th was Maundy Thursday and as Ian Mortimer points out in his very readable biography of the King The Fears of Henry IV this has resulted in uncertainty as to his actual birth in that Henry tended to mark the anniversary on Maundy Thursday however it fell by the calendar. It has also in consequence, Mortimer suggests, resulted in the practice at the Royal Maundy of English monarchs performing the pedelavium and giving alms to as many poor people as they have years, as opposed to the practice in other realms, and as in the Papacy and ecclesiastical communities, of just chosing thirteen after the Gospel accounts of the Last Supper.