At Easter I managed to read Christopher Fletcher's Richard II: Manhood, Youth and Politics, 1377-99 ( Oxford Historical Monographs ). This is a superb book which I cannot commend too highly, and I felt rather ashamed that I had not read it before. 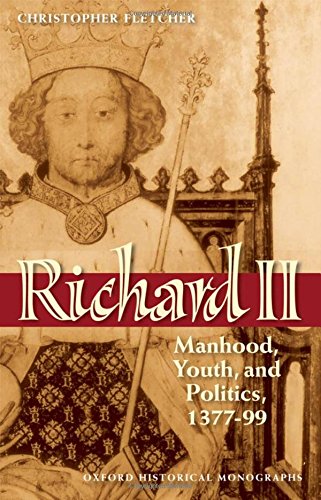 
Fletcher gives a very significant re-interpretation of the King's policy and aims, and of the reign in general. Those who do not know this fascinating period would probably need to read Nigel Saul's Richard II (Yale UP) or a similar narrative biography first, but Fletcher is certainly now essential reading to begin to assess the King and his reign.

King Richard II was an image conscious monarch if he was nothing else, and this gives me the oportunity to post a photograph of one of the lesser known depiction of the King.  It is from a charter granted to Shrewsbury in 1389, and an image that has only become widely known ( if that yet indeed) in the last quarter of a century or so. This image relates, I suspect, to the use of Christ-like imagery to describe the King in 1392 at the time of his reconciliation with the city of London which Christopher Fletcher discusses in his book.

Image:archivezone.org.uk
This beautifully illuminated document is a royal charter granted by King Richard II in 1389.  In it he confirms the rights given to the people of Shrewsbury in an earlier charter of King Edward III.  The initial ‘R’ shows King Richard II and his wife, Anne of Bohemia.  Anne is depicted interceding with her husband on behalf of the people of Shrewsbury.
King Richard held parliament at Shrewsbury in 1398, probably in Shrewsbury Abbey, on Monday 28thJanuary.  Richard was not a popular king with all of his subjects, and it seems that many of the townspeople of Shrewsbury were none too pleased that he had chosen to move his entourage and court here.  The chronicler, Adam Usk, noted that ‘he paid nothing even for his provisions’.


[ Adapted from Shropshire Archives at archivezone.org.uk]