John Dillon posted about St Ubaldus of Gubbio, whose feast day is today, on the Medieval Religion discussion group as follows:

Orphaned while still a boy, the wealthy Ubaldus (d. 1160; the name is a pronunciation spelling of the more familiar Hucbaldus or Hubaldus) was educated at a community of canons at Fano in the Marche, embraced an ascetic lifestyle, and returned to his native town of Gubbio in Umbria, where he became a canon of the cathedral chapter and later its prior.  After a disastrous fire he undertook the rebuilding of the cathedral church.  Ubaldus was ordained priest and in 1129 became Gubbio's bishop.  Noted for his pastoral zeal and and for careful management of church property and revenues, he refused to be dissuaded or even angered when physically threatened during a period of factional strife in the city.  Gubbio's victory in 1151 over an attacking force from Perugia and other cities was credited to the efficacy of Ubaldus' prayers.  In 1155, already elderly and infirm, he succeeded in convincing Friedrich Barbarossa, who had just burned Spoleto, to lift his siege of Gubbio.  Ubaldus is Gubbio's patron saint.Ubaldus has two almost immediately posthumous Vitae from Gubbio, the first (BHL 8354) emphasizing his leadership in the nascent Augustinian Canons and the second (BHL 8355, 8357; two versions, of which the longer, dedicated to Barbarossa, is the earlier) on his merits as a reforming bishop.  He was canonized by Pope Celestine III in 1192.  Two years later, when his body was exhumed for transportation to the predecessor of the early sixteenth-century basilica di Sant'Ubaldo atop Monte Ingino above the city, it was found to be incorrupt.  As it still is, apparently: 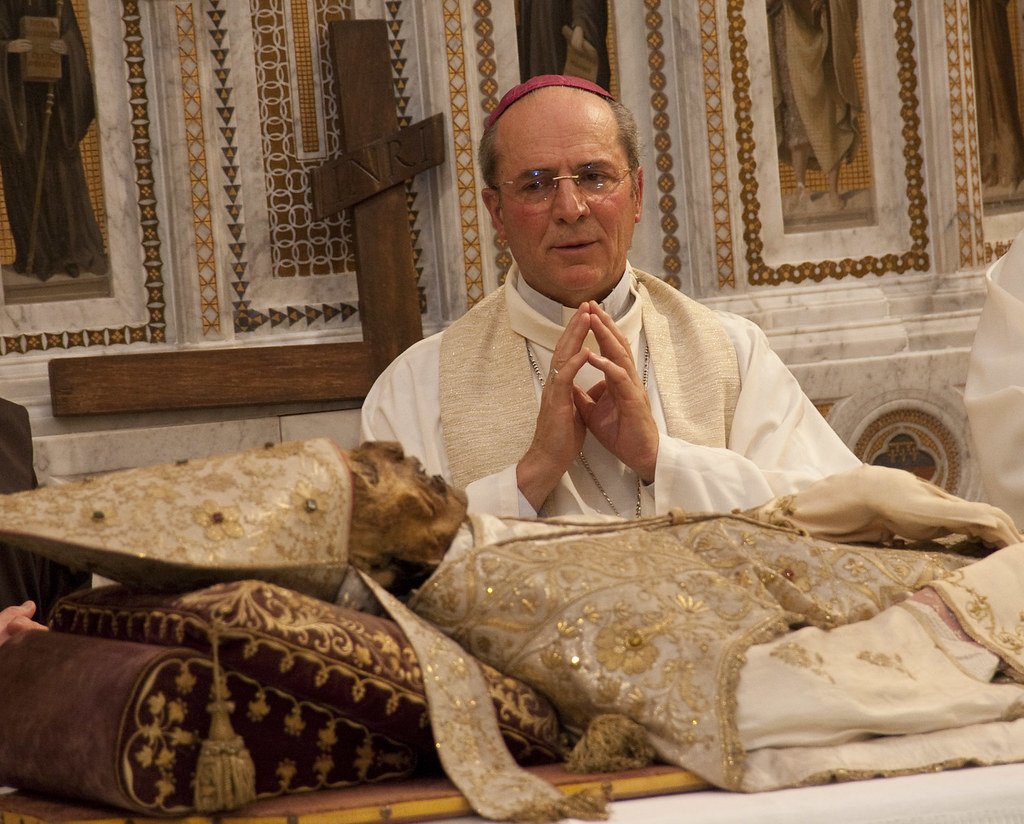 https://c7.staticflickr.com/5/4133/4979796318_f454937102_b.jpgUbaldus' cult remained local until the latter half of the fourteenth century and the early fifteenth, when it spread across northern Italy chiefly in Augustinian contexts.  Also in the fourteenth century it crossed the Alps and found a home at Thann in Alsace, where a collegiate church was dedicated to him under the name of Theobald.  Thann's Vita sancti Theobaldi (BHL 8028) presents a form of Ubaldus' Vita secunda thought to be intermediate between its two versions from Gubbio and Thann's "finger" of its Saint Theobald has been shown to have come from the body preserved on Monte Ingino, though from its right earlobe rather than from a hand (see "La vérité à propos de la relique" at <http://www.eugubininelmondo.com/fr/Thann.html>).  Herewith a view of Thann's reliquary housing this object of veneration:http://www.ilmiositoweb.it/santubaldo/Reliquia.jpgSome period-pertinent images of St. Ubaldus of Gubbio:a) as depicted (lower register, second from left) in an earlier fourteenth-century polyptych (c. 1325-1350) in Gubbio's Museo civico: 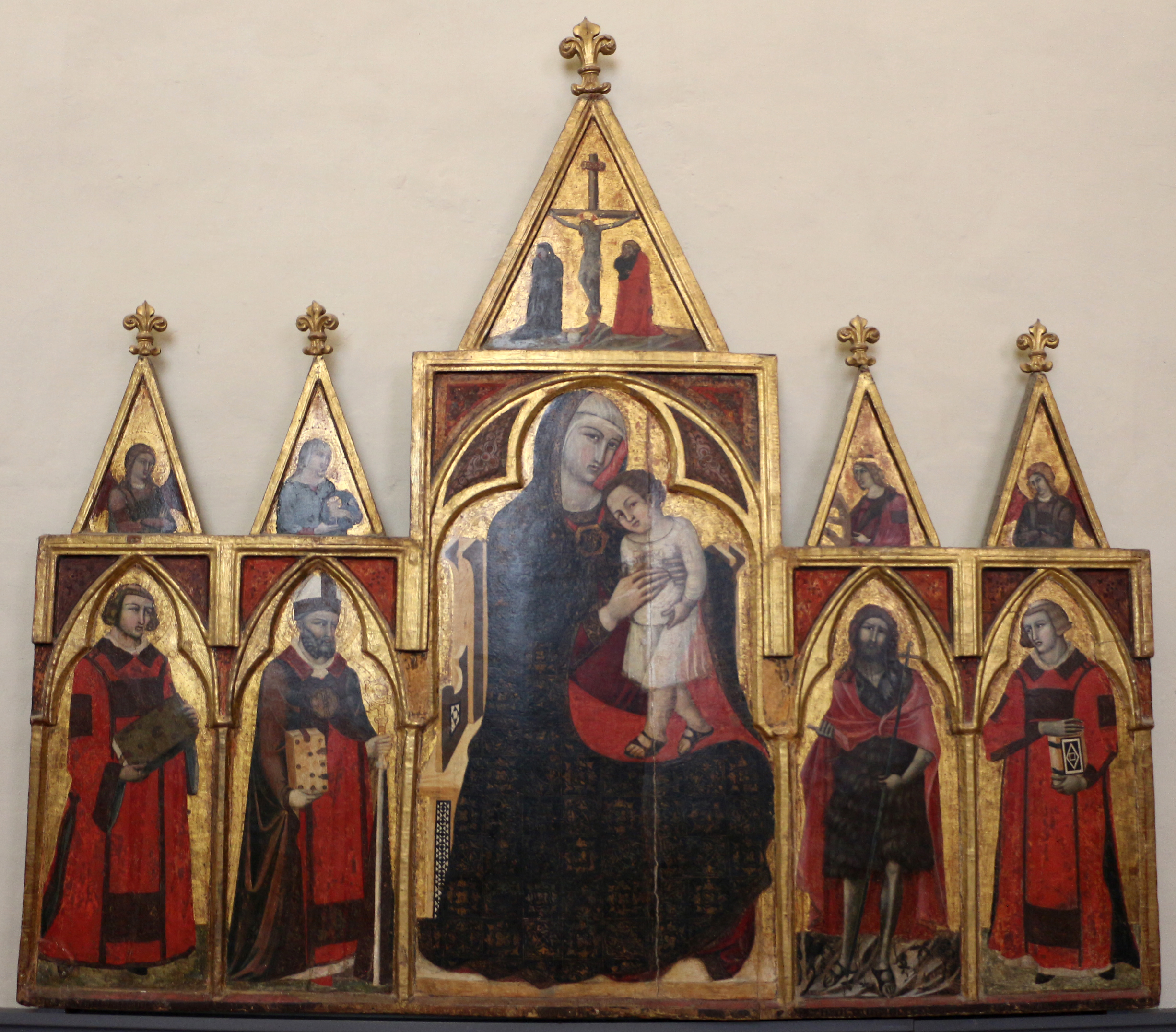 http://tinyurl.com/heu9vn7d) as depicted (at left, flanking the BVM and Christ Child; at right, St. Sebastian) as depicted by Giovanni Martino Spanzotti  in a late fifteenth-century triptych (probably early 1480s) in the Galleria Sabauda in Turin: http://www.vbs50.com/public/Galleria%20Sabauda/GalleriaSabauda_014.JPGe) as depicted (at left, holding a model of Gubbio) in the early sixteenth-century frescoes (c. 1501-1510) in Gubbio's cappella del Spirito Santo:http://www.trgmedia.it/upload/22367.ubaldo%20affresco%20fai.jpgDetail view:

http://tinyurl.com/jxajyyhThese frescoes are currently undergoing restoration.  There are excellent detail views of the portrait of Ubaldus from earlier this year toward the beginning of the brief YouTube video linked to here (starting at 0:17):https://www.youtube.com/watch?v=zijsRXVx0SUf) as depicted (at right; at left, St. Augustine of Hippo) in an early sixteenth-century fresco (c. 1503; attributed to Orlando Merlini) in Gubbio's Museo civico:http://tinyurl.com/j5oyx8a

Theresa Gross Diaz added a link to an article about the rather splendid - and rather curious - celebrations Gubbio puts on each year for St Ubaldus. Italian cities have ofen preserved wonderful customs such as this as signs of local identity and patriotism. The illustrated article about the Corsa dei Ceri in honor of St Ubaldo on May 15) can be seen at http://www.italoamericano.org/story/2016-5-15/Gubbio  The three 'ceri' i.e. 'candles' (for SS Ubaldo, Giorgio and Antonio) are shouldered up the very steep Mount Ingino from the central piazza.
Posted by Once I Was A Clever Boy at 19:47