St Walburga, her father and family


Today is the one of the feast days of St Walburga, who although she was English is far better known on the continent. She is commemorated in Bavaria and Belgium today, but by the Benedictines on February 25th ( 26th in a leap year). She and her kindred seem to be an example of notion that the family that prays together stays together.  putting it in historical terms they do appear to illustrtae the importanc eof family ties and kinship in their age.

John Dillon posted the following piece about her on the Medieval Religion discussion group:

The sister of Sts. Willibald and Wynnebald and the daughter of the implausibly named St. Richard of England, Walburg (also Walburga, Walpurga, Walpurgis; d. 779) left England for Germany to assist St. Boniface in his missions.  She settled in at Tauberbischofsheim in the northeast of today's Baden-Württemberg and moved on to Heidenheim in Bavaria, where she was put in charge of the sisters at a double convent founded by Willibald.  Later she ruled the entire establishment (both sexes).  Walburg is the patron saint of the Abtei Sankt Walburg in Eichstätt, founded by count St. Liutger / Leodegar of Lechsgemünd in 1035 on property adjacent to a church that had housed her relics since the late ninth century.Some period pertinent images of St. Walburg:a) as depicted (at centrr; at left, abbess Hitda) in the dedication illumination of the seemingly earlier eleventh-century Hitda Gospels (Darmstadt, Universitäts- und Landesbibliothek, Hs. 1640, fol. 6r): 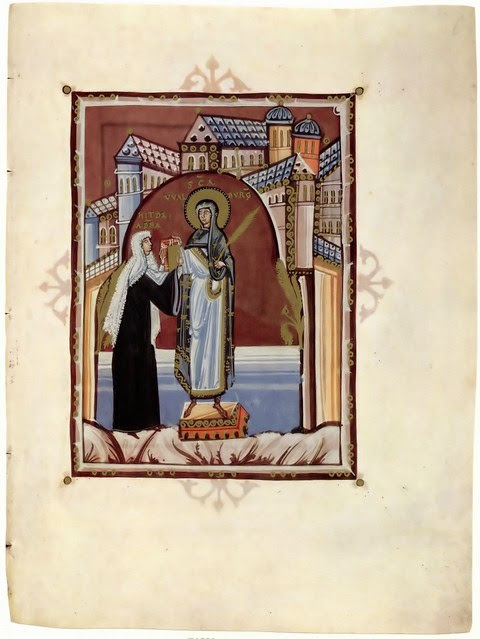 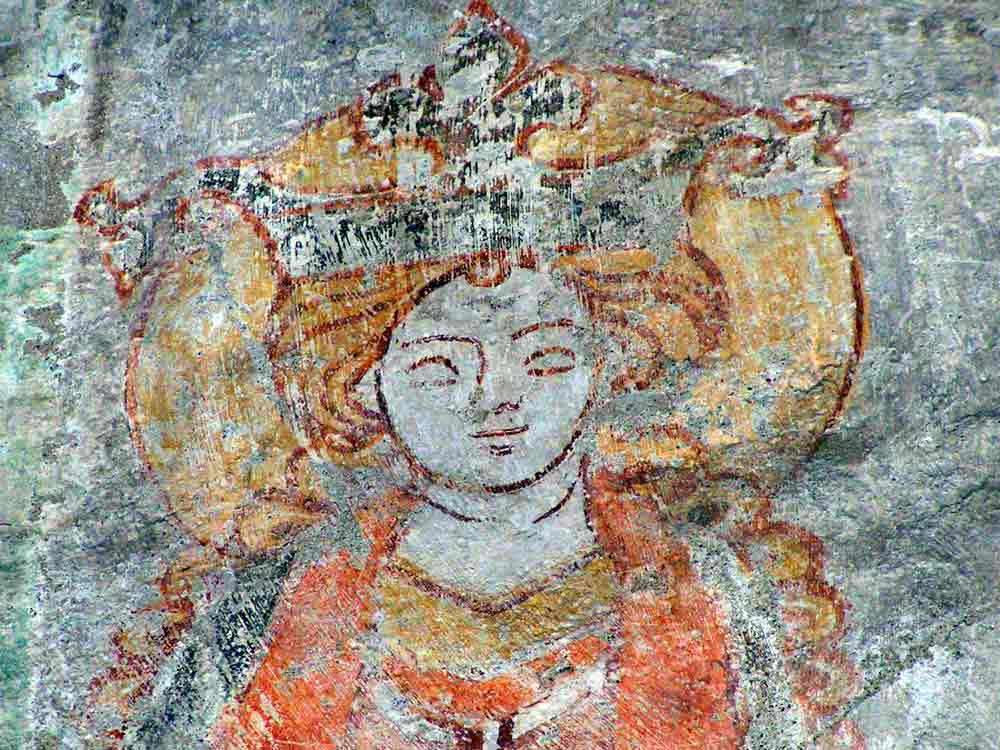 http://tinyurl.com/gnqkc9be) as depicted (at upper right; at lower left, St.  Liutger / Leodegar of Lechsgemünd; at lower right, abbess Sophia of Hüttingen) in what appears to be a cropped reproduction of modern copy of a later fourteenth-century painting on parchment (c. 1360) at the beginning of the Salbuch (register of property transfers) of the Abtei Sankt Walburg in Eichstätt:http://tinyurl.com/z2367nq [as widely used in Wikipedia, without indication of source] 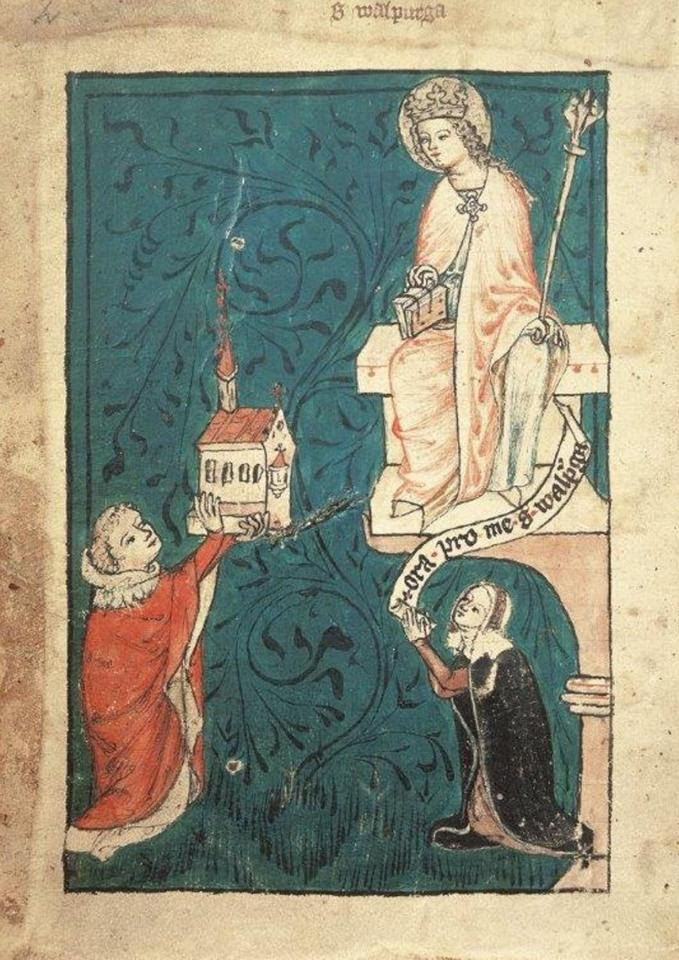 http://tinyurl.com/j3g5262 [not cropped; with metadata calling it "copy 20 of 20"]For more on the abbey and on this image see:http://tinyurl.com/j5k5k79f) as portrayed in a fifteenth-century polychromed and gilt wooden statue in the Pfarrkirche St. Walburga in Beilngries (Lkr. Beilngries) in Bavaria:

http://tarvos.imareal.oeaw.ac.at/server/images/7021157.JPGg) as portrayed in a fifteenth- or earlier sixteenth-century polychromed and gilt wooden altar statue in the Katholische Pfarrkirche St. Michael in Großweingarten (Lkr. Roth) in Bavaria:

http://tarvos.imareal.oeaw.ac.at/server/images/7021260.JPGh) as portrayed (second from right) by the Master of the High Altar of Eichstätt's Cathedral in the frequently repainted later fifteenth-century statues of sainted members of the founding family of the diocese (ca. 1470-1480?) now placed in the central shrine of the high altar of the east choir of Eichstätt's Dom St. Salvator, Unserer Lieben Frau, und St. Willibald (from left to right, the other statues are of St. Richard of England, St. Willibald, the BVM, and St. Wynnebald):http://tinyurl.com/pbdsuwqi) as portrayed (top centre, with angels at her bier) in a later fifteenth-century relief above the door to her resting place in the upper crypt of the Kloster- und Pfarrkirche St. Walburg in Eichstätt:

http://tinyurl.com/huceaekj) as portrayed (at centre) in the later fifteenth- or earlier sixteenth-century polychromed gilt statues of Walburg(a) and her immediate family in the upper crypt of the Kloster- und Pfarrkirche St. Walburg in Eichstätt (the others, from left to right, are of St. Richard of England, St. Willibald, St. Wynnebald, and St. Wunna [in diocesan hagiography the mother of Sts. Walburg, Willibald, and Wynnebald]):http://tinyurl.com/neo5qvak) as portrayed in relief on a late fifteenth- or earlier sixteenth-century polychromed ceiling boss (c. 1480-1520) in the Mortuarium of Eichstätt's Dom St. Salvator, Unserer Lieben Frau, und St. Willibald:

http://tarvos.imareal.oeaw.ac.at/server/images/7021102.JPGl) as portrayed by Clement of Baden in a late fifteenth-century polychromed and gilt wooden statue in the église Sainte-Walburge in Walbourg (Bas-Rhin):

http://tarvos.imareal.oeaw.ac.at/server/images/7021612.JPGn) as depicted (at centre in the upper register, betw. Sts. Willibald und Wynnebald) in a modern copy, in the Kloster- und Pfarrkirche St. Walburg in Eichstätt, of an earlier sixteenth-century tapestry (c. 1520) of her family (here dubiously including St. Sualo / Sola of Solnhofen, the town that archaeopteryx made famous) and a few others (including St. Benedict of Nursia, whom with becoming modesty the tapestry does not style cognatus):

http://www.abtei-st-walburg.de/fileadmin/_processed_/csm_Teppich_b40d1ad2f6.jpg
The original is kept in Eichstätt's dioscesan museum.  In this reduced view it shows lacunae not present in the copy:http://www.kirchliche-museen.org/fotos/museum13/eichstaett1.jpgAh, the holy kinship of Eichstätt!


John also posted the following on the same website about her father St Richard on his feast day on February 7th, as follows:

Richard is the name implausibly given by a much later, non-English-speaking tradition to the early eighth-century Anglo-Saxon father of Sts. Wynnebald, Willibald, and Walburg(a).  According to Hygeburg (formerly referred to as Huneberc) of Heidenheim in her later eighth-century Vita of Willibald (BHL 8931; commonly known as her Hodoeporicon of Willibald), Wynnebald and Willibald were accompanied by their father -- whom Hygeburg does not name -- on their pilgrimage from England to the Holy Land.  Still according to Hygeburg, the father died at Lucca and was laid to rest there in the church of St. Frigidian (now, in a structure mostly of the twelfth and thirteenth centuries, San Frediano).  His cult, under the name Richard and with the added specification of his having been a king in England, is attested from at least the twelfth century onward both in Eichstätt, where Willibald was the first bishop, and in Lucca, where remains said to be his are among San Frediano's relics.  A brief Vita (BHL 7207), naming him as _Richardus_ and calling him _in Anglorum gente ... Rex_, is a reworking of the initial paragraphs of Hygeburg's Vita; though ending with his elevatio at Lucca, it clearly belongs to a series of similar re-workings originating in the diocese of Eichstätt.  At Lucca miracles were reported at his pre-fifteenth-century tomb in San Frediano, which latter bore the following inscription in leonine hexameters:

(AA.SS., Feb. tom. II. [Antwerp, 1658], cols. 79 B and C).
Both the name and the kingship were accepted by Bl. Cesare Baronio in early editions of the Roman Martyrology.  In the revision of 2001 the kingship was dropped, with the saint now identified rather as a pilgrim.  But the RM still calls him Richard, the name that's embedded in various liturgies and for which there really is no good alternative.  Alas, even with the example of Prince, _Sanctus quondam [aliter: _perperam_] Richardus vocatus_ doesn't seem particularly workable.
Some period-pertinent images of St. Richard of England:
a) as depicted in a later thirteenth-century fresco in the Cappella del Soccorso in Lucca's basilica di San Frediano: 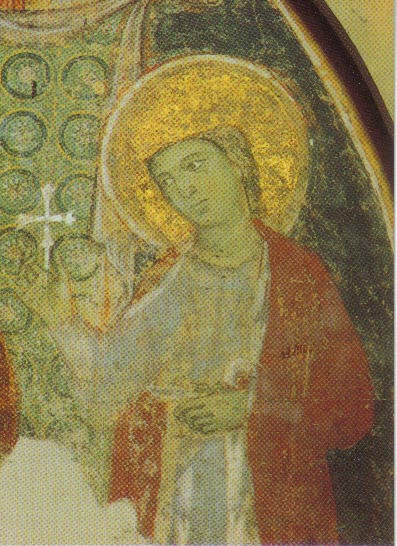 http://www.santiebeati.it/immagini/Original/39850/39850D.JPG
b) as portrayed (twice) by Jacopo della Quercia in his early fifteenth-century marble polyptych (1416) honoring Sts. Ursula, Lawrence of Rome (or Vincent of Zaragoza?), Jerome, and Richard in the cappella Trenta in Lucca's basilica di San Frediano:
1) at right in the monument's upper portion (at left, St. Jerome):

http://tinyurl.com/z5mp2fu
2) on the predella panel beneath (at top, on his tomb; miraculously healing the possessed housemaid Gaschola):
http://tinyurl.com/gs3dfuc
The monument as a whole (the chapel was dedicated to Richard and that's Jacopo della Quercia's tomb for him beneath the altar table):

http://tinyurl.com/jc4k9g5
c) as portrayed (at far left) by the Master of the High Altar of Eichstätt's Cathedral in the frequently repainted later fifteenth-century statues (c. 1470-1480?) now placed in the central shrine of the high altar of the east choir of Eichstätt's Dom St. Salvator, Unserer Lieben Frau, und St. Willibald (from left to right, the other statues are of St. Willibald, the BVM, St. Walburg(a), and Saint Wynnebald):

http://tinyurl.com/pbdsuwq
d) as portrayed (at far left) in the later fifteenth- or earlier sixteenth-century gilded statues of Walburg(a) and her immediate family in the upper crypt of Eichstätt's Pfarrkirche St. Walburg (the others, from left to right: St. Willibald, St. Walburg[a], St. Wynnebald, St. Wunna):


Here in England her best known church ( and there cannot be many at all I suspect ) in the wondrous one in Preston which the ICKSP is now administering as a shrine for Eucharistic devotion and about which I have posted in the past. 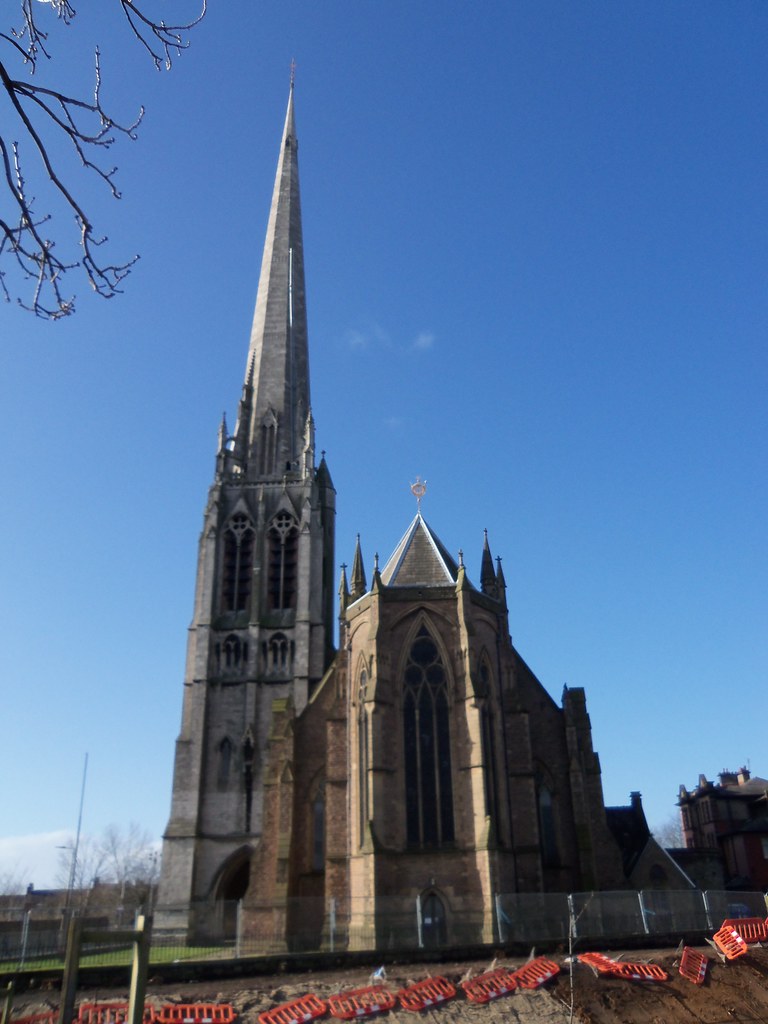