In my continuing conversations with a friend about the outbreak of the First World War and about the settlement that ended it one of my contributions is to stress how the possibilities of any negotiated settlement rapidly disappeared as all the Great Powers, and the allies they recruited, settled into seeking all out victory and the utter destruction of their opponants.

In Britain one aspect of this was the demonization of the Kaiser. For all his blood ties to the British Royal family he had an uncertain relationship with political and popular opinion here from about 1887 onwards . It was not difficult for some, if not many, to be doubtful or wary, and to be critical of a monarch who had an unfortunate tendency to produce verbose public pronouncements (which his staff then got the press to tone down) and appeared at times outlandish in his uniforms and with his up-swept moustache.

That said, such a picture of him is a caricature, and we can now see that it was in so many ways very unfair to him. Verbose he was, but after sounding forth his ideas he was likely to be reflective and cautious.

However, with the beginning of the war in 1914, such ideas and perceptions helped reinforce collective opposition to Germany - and one of the Kaiser's problems was to be that by appearing to be the voice and spirit of Germany, and with no obvious political figure to shoulder the odium, he was rapidly to become the hate figure. The reality of his actual power and influence was very different, but that did not affect the image he gained. That process was already starting in August 1914 as can be seen from a piece reprinted in The Times. They are giving daily extracts from their editions of a hundred years ago. I noticed from their edition of August 22nd 1914 an account of the German occupation of Brussels.

The correspondent laments the absence of the coloured Prussian uniforms of the past instead of the field grey of the contemporary era and wrote of how there "came the legions of the man who has broken the peace of Europe to gratify belated ambition....truly it was a sight to gladden the eyes of Kaiser Wilhelm."

Note that it is not Germany, nor the German government or the German army that he blames, but the Kaiser personally.

This process gathered pace througout the war, fuelled by cartoonists such as the Dutch Louis Raemaekers, and doubtless impeded the possibility of a negotiated settlement and stability in 1918 - it was seemingly easier to deal with a republic than the man and his dynasty which had been personally accounted responsible for the war - not the politicians, not the military and not the failed diplomacy. Someone must be to blame, and that must be the Kaiser. Hence the cries of "Hang the Kaiser" in 1918-19. To this day in the popular media for some at least it is still a case of  "the Kaiser's war" and such like. 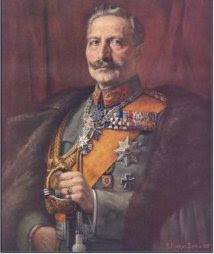 
Those who thought that getting rid of the Hohenzollerns and the other German dynasties and bringing in the age of the common man were, of course, to be in for a very nasty shock when they saw what the common man could, and indeed did, turn out to be like. The settled order of German society was swpt away by internal revolution and external pressure, by hyper-inflation and by social upheaval. The nasty and vicious, evil things a traditional order kept under control and at bay were to be given free roam.