So the bawbee has finally dropped with the Westminster political establishment and the London based media about the situation facing us about Scotland and the threat posed by the referendum. Never mind the next General Election, possible EU referendum or the international situation in Ukraine or the Middle East we are now facing potentially the worst constitutional crisis in over 350 years. I have made this point to friends who, indeed, agree with me for months, but the media coverage in England has been patchy, and the issue seen as a minor distraction.

Now, in the wake of the latest opinion polls the media have woken up and now are full of prospective eventualities that few alas would have thought credible until recently. Depending on what happens next week we are potentially in uncharted waters. Even a No vote victory will engender major questions as to transferring new powers to the Holyrood parliament. A Yes vote would be almost still beyond our comprehension. It may well turn out to be like living through the break up of Austria-Hungary in 1918-19.

As to ascribing blame, well let us begin with our idiot Prime Minister for agreeing to the holding of the referendum at all rather than maintaining that it was beyond the powers of the Holyrood parliament to call such a thing in the first place. This has been the line taken by the Spanish government in regard to the regional government of Catalonia. Furthermore there is the matter not having a third choice of granting more powers, let alone allowing the positive answer to the question posed being for secession. I suppose that comes with having a PPE-ist fron Brasenose running the country.

It is utterly ludicrous that a miniscule number of the four million Scots electorate in a closely fought campaign can decide the fate of 63 million British subjects.

The Daily Telegraph reports an opinion poll of likely voting intentions with a map illustrating the distribution of opinion. Looking at it I see historical fault lines that stretch back a thousand and more years. Here are the Highland-Lowland divide, the Scots of Argyll and the Picts of the east, the emergence of a Scotland  unified by its Kings , joining Scot and Pict, Galloway and English Lothian into one realm, evidence of Norman patterns along the eastern lowlands as opposed to Celtic Scotland(forgive the over-simplifications of terminology), the development along Anglo-French lines of the Borders in the twelfth century under King David I and King Malcolnm IV, the splits of the Reformation and the mid-seventeenth centuries. All of which, inter alia, is a good argument for not doing anything to unsettle the Union. An independent Scotland by 50.1% would be a deeply divided nation. 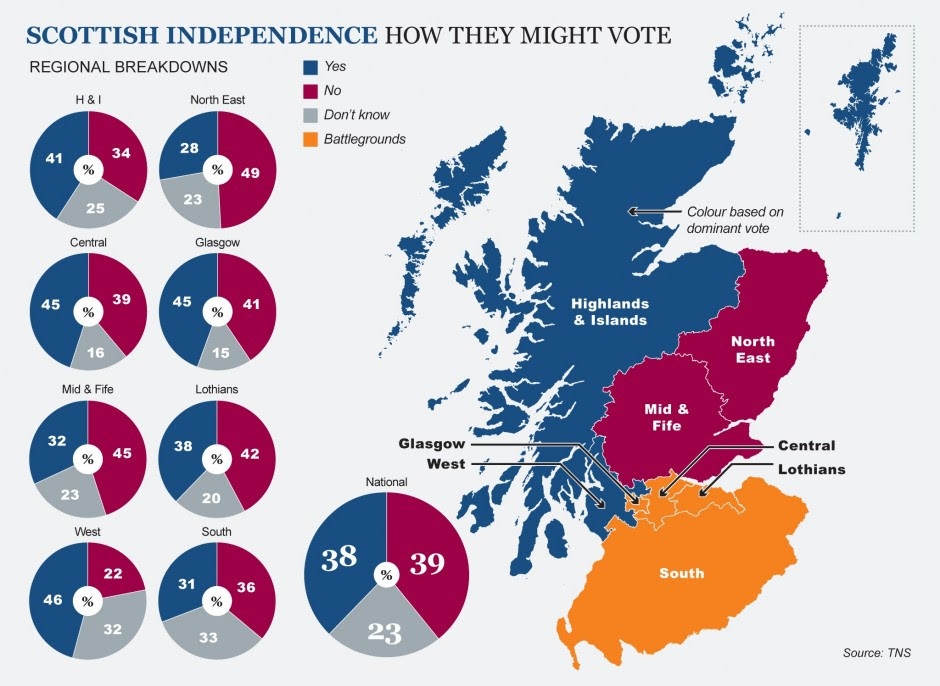