The Queen's message to Scotland 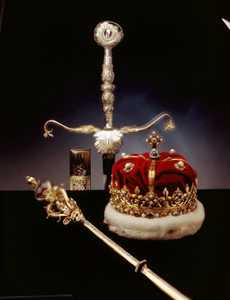 The Honours of Scotland


The Queen has issued a statement following the Scottish referendum in which voters rejected independence by 2,001,926 votes to 1,617,989 on Thursday.

In the statement Her Majesty says:

"After many months of discussion, debate, and careful thought, we now know the outcome of the referendum, and it is a result that all of us throughout the United Kingdom will respect.

"For many in Scotland and elsewhere today, there will be strong feelings and contrasting emotions - among family, friends and neighbours.

"That, of course, is the nature of the robust democratic tradition we enjoy in this country. But I have no doubt that these emotions will be tempered by an understanding of the feelings of others."

"Now, as we move forward, we should remember that despite the range of views that have been expressed, we have in common an enduring love of Scotland, which is one of the things that helps to unite us all.

"Knowing the people of Scotland as I do, I have no doubt that Scots, like others throughout the United Kingdom, are able to express strongly-held opinions before coming together again in a spirit of mutual respect and support, to work constructively for the future of Scotland and indeed all parts of this country.

"My family and I will do all we can to help and support you in this important task."

Last week, after various press reports claimed the Queen was growing increasingly concerned about Scotland breaking away, and some MPs -  doubtless unwisely - urged her to intervene publicly, Buckingham Palace issued a clear statement maintaining that she was above politics:

"Any suggestion that the Queen would wish to influence the outcome of the current referendum campaign is categorically wrong. Her Majesty is simply of the view this is a matter for the people of Scotland," the Palace said. Commentators noted this statement as particularly emphatic.

Last Sunday on leaving Crathie Kirk near Balmoral the Queen did however comment to the extent of saying that she hoped voters would think very carefully about the issues involved. Dressed in the shade of green often associoated wirth royal ceremonial in Scotland that was was all Her Majesty said - politically neutral but pointing to the importance of the decision. As was pointed out on the BBC Radio 4 coverage of the referendum in the small hours of this morning the comment at Crathie was carefully orchestrated, with the press allowed close to the group of well wishers outside the church and hence the opportunity to get the Royal message heard. Skillful and understated - the essence of the Queen's exercise of her office.

It would be nice if some way could be found to make greater use the Honours of Scotland in the Coronation service. This might be difficult given the great age of the Crown of Scotland (one wouldn't want it to be damaged) but I'm sure they could think of something. I note that it was put on display at the opening of the inaugural session of the Scottish Parliament in 1999.