St Giles in art and devotion

Today is the feast of St Giles, and having been baptised in and spent years around a church dedicated to him, and about hich I wrote this time last year in St Giles in Pontefract. He is a saint for whom I have a particular interest and devotion. 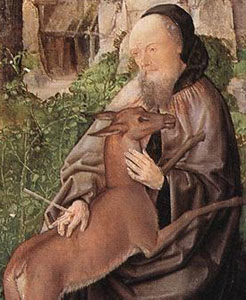 There is an online summary of the legends about him here - the time scale and setting are not that well recorded - and also about the widespread devotion to him.

I have posted about him previously in St Giles, in St Giles by Thomas of Coloswar about a medieval Hungarian painting, in St Giles about his depiction in medieval glass in Wells Cathedral and in St Giles and his shrine.

I imagine that it was the placing of that shrine, one of the assembly points for the pilgrimage to Compostella, that led to the diffusion of the cult of St Giles, both along the route to Galicia and on the return to pilgrims' home countries; St Giles entered the bloodstream of the cult of Santiago. That was a cult which was supported by and supported in return the expansion of the Cluniac vision, and coincides at least with the spread of  devotion to St Giles to England after the Norman Conquest, as well as eastwards to Hungary and Poland.

Bty the later middle ages St Giles was accounted one of the Fourtenn Holy Helpers - and was indeed the only non-martyr amongst them - and frequently appears in devotional images in north-western Europe. Thus there is not only the great work - now sadly disassembled  - by the Master of St Giles, but also by artists such as Hans Memling (c1430-1494), about whom there is an online article here.

His cult appears to have rather declined in the post-Tridentine world, yet he remains apopular patron saint of medieval churches in England. These often represent links to his story or patronage - hospital foundations, especially for the lame, or places linked to metal working or in forest areas. 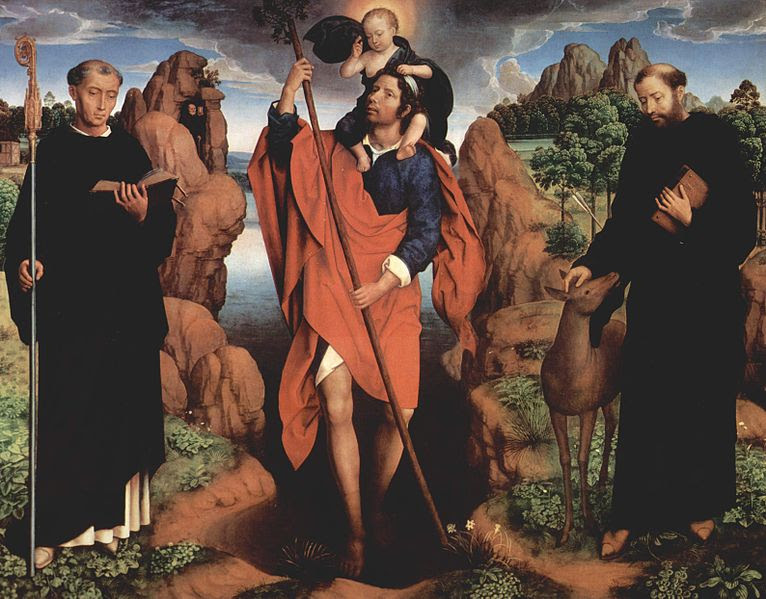 St Giles pray for us