Our Lady of Haddington

Our Lady of Haddington


The restoration was the achievement of the late Earl of Lauderdale, a Guardian of the Anglican Shrine at Walsingham. There is a life of the Earl here. His account of the background to the re-creation of the Haddington shrine can be read at Restoring Haddington.

Altar of the Blessed Virgin and the Three Kings, Lauderdale Aisle of Collegiate Church of St. Mary the Virgin, Haddington,
The Shrine of Our Lady of Haddington
Image:theanglocatholic.com

It was only in the early 1970s that the restoration of the choir after more than four centuries of ruin, a result of the English invasion of 1548, was undertaken. There are articles about the church and its history from Wikipedia at St Mary's Collegiate Church, Haddington and from the Scottish Churches Trust at St Mary's Parish Church, Haddington

There are articles on the parish website about the History of St Mary'sand about the Lauderdale Aisle, which houses the shrine.

Haddington Collegiate Church from the north-east

The original home of the medieval shrine was at Whitekirk. A place of Christian worship from the earliest times and known in Old English as Hwīt Cirice, it had a holy well, which is now lost, having dried up in the nineteenth century following agricultural drainage, but is thought to be located not far from the church building. The Holy Well was dedicated to St Mary the Virgin, and there was a famous statue, likewise dedicated and known as Our Lady of Haddington. It was on the pilgrim's route from St Andrews to Santiago de Compostela and described as a stopping point in the Iter pro peregrinis ad Compostellam., Book V of the Codex Calixtinus.

The shrine of Our Lady at Whitekirk was desecrated by the armies of King Edward III of England in 1356, a period that would become known as the Burnt Candlemas. Later in the fourteenth century, the shrine of Our Lady was reconsecrated at the newly built Church of St Mary the Virgin in Haddington. However Whitekirk continued to be a place of pilgrimage, however, receiving visits from the future Pope Pius II and from King James IV and King James V.

In early 1435, Aeneas Sylvanus Piccolomini (the future Pope Pius II) was travelling to Scotland on a diplomatic mission as Papal Legate , when his ship was beset by storms. After praying to Our Lady, the ship and its crew made port safely at Dunbar, and having promised to walk barefoot to the nearest shrine of the Virgin, Piccolomini set out for Whitekirk. The eight miles through the frozen countryside left him with rheumatism that he would complain about for the rest of his life. Memoirs of a Renaissance Pope contains his lively memories of his adventures and misadventures in the Scotland and England of 1435.


The church at Whitekirk dates from twelfth century, the original building being reconstructed during the fifteenth century starting with the vaulted stone choir, built in 1439 by Adam Hepburn of Hailes. 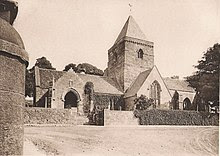 The church at Whitekirk in 1893


The church was set on fire in 1914, supposedly by suffragettes, although this has not been proven. It was restored by the office of Sir Robert Lorimer, an architect noted for his work on medieval Scottish buildings and in their style for new composition. The church was last restored in 2005-6.