Today has been Holy Cross Day, and follows from my previous post about the Dream of the Rood. At the Oxford Oratory today Mass was celebrated in the presence of a relic of the True Cross, and after Mass there was the opportunity to receive a blessing with the reliquary. The introit at the 11am Mass was J.M.Neale's translation  "The royal banners forward go" of Venantius' great hymn, which we sang in Latin at Solemn Vespers also. 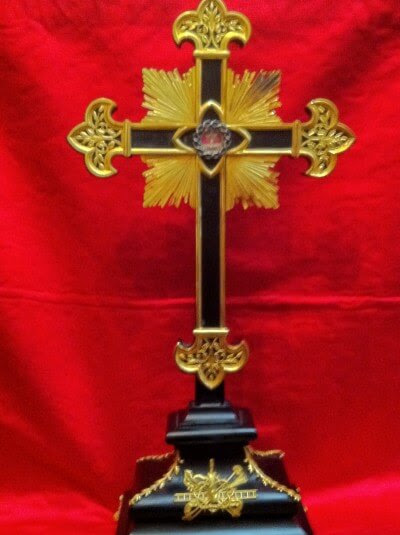 The Oratory Reliquary of the True Cross

Here, from the Office of Readings, is the appointed second reading,  which is from a discourse of the late seventh, early eighth St Andrew of Crete, who is always an elegant and eloquent voice, about whom there is an introduction here.

I have taken this version from the  Universalis website, although in practice I prefer the translations printed in The Divine Office.

We are celebrating the feast of the cross which drove away darkness and brought in the light. As we keep this feast, we are lifted up with the crucified Christ, leaving behind us earth and sin so that we may gain the things above. So great and outstanding a possession is the cross that he who wins it has won a treasure. Rightly could I call this treasure the fairest of all fair things and the costliest, in fact as well as in name, for on it and through it and for its sake the riches of salvation that had been lost were restored to us.
Had there been no cross, Christ could not have been crucified. Had there been no cross, life itself could not have been nailed to the tree. And if life had not been nailed to it, there would be no streams of immortality pouring from Christ’s side, blood and water for the world’s cleansing. The legal bond of our sin would not be cancelled, we should not have attained our freedom, we should not have enjoyed the fruit of the tree of life and the gates of paradise would not stand open. Had there been no cross, death would not have been trodden underfoot, nor hell despoiled.
Therefore, the cross is something wonderfully great and honourable. It is great because through the cross the many noble acts of Christ found their consummation – very many indeed, for both his miracles and his sufferings were fully rewarded with victory. The cross is honourable because it is both the sign of God’s suffering and the trophy of his victory. It stands for his suffering because on it he freely suffered unto death. But it is also his trophy because it was the means by which the devil was wounded and death conquered; the barred gates of hell were smashed, and the cross became the one common salvation of the whole world.
The cross is called Christ’s glory; it is saluted as his triumph. We recognise it as the cup he longed to drink and the climax of the sufferings he endured for our sake. As to the cross being Christ’s glory, listen to his words: Now is the Son of Man glorified, and in him God is glorified, and God will glorify him at once. And again: Father, glorify me with the glory I had with you before the world came to be. And once more: “Father, glorify your name.” Then a voice came from heaven: “I have glorified it and will glorify it again.” Here he speaks of the glory that would accrue to him through the cross. And if you would understand that the cross is Christ’s triumph, hear what he himself also said: When I am lifted up, then I will draw all men to myself. Now you can see that the cross is Christ’s glory and triumph.