Rejoicing in the Holy Trinity


I managed on my return to Oxford yesterday to attend the Ordinariate Group's Mass at Holy Rood where the preacher was John Hunwicke, and exercising his ministry as a Deacon following his Ordination thereto last week.

In his sermon on the Holy Trinity he drew attention to the point that what we are called to do on Trinity Sunday is to celebrate the One in Three and Three in One, and not to attempt, with all the attendent theological dangers, to seek to understand it. Thus, as he pointed out, the customary antiphons for the day suggest an intellectual intoxication with the idea of the Trinity, a sheer delight in its wonderous unity and self-sufficiency that commands our worship and celebration.

This, it seems to me, is a very good point, and far better than trying to re-invent the Trinity, or at least Trinitarian theology in a parish sermon. Much more sensible, celebrate the Mystery, and rejoice in what has been revealed to us. When the composer of the Athanasian Creed said the Trinity was incomprehensible he knew what he was saying, and knew what he could not say, and did not try to. 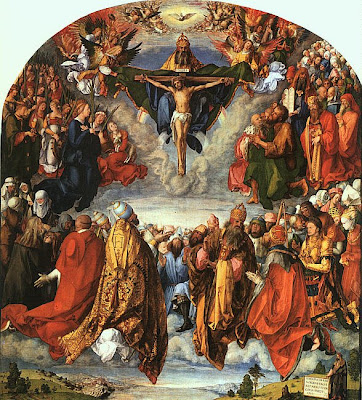 The Adoration of the Holy Trinity
Albrecht Dürer, 1511

When I was teaching Catechism and RCIA classes, I found the best way to speak about the Holy Trinity, after the classic definition of the doctrine, of course, was to describe how the Church prays liturgically: to the Father, through the Son, in the unity of the Holy Spirit. Avoiding heresy thusly by not trying to analyse the doctrine, but looking at our experience.