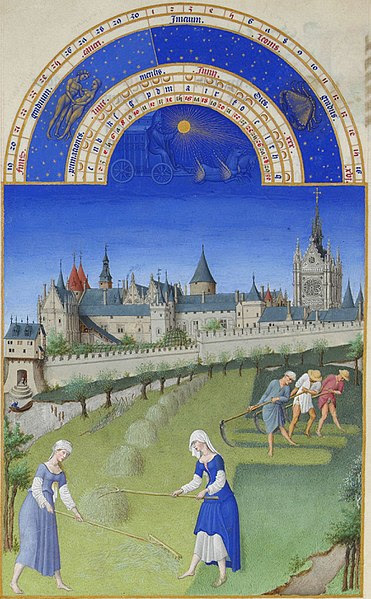 All three Limbourg brothers, Jean, Paul and Herman, are believed to have had a hand in this page, as well as possibly Jean Colombe, the artist who continued the work on the Book of Hours in the years 1485-89.

Here, as in the May page, is a depiction of a royal residence in central Paris but shown with a rural scene of hay making in the foreground. The buildings are the the Palais de la Cité with the Sainte Chapelle, clearly identifiable on the right. In addition to the Chapel considerable  parts of the other buildings still survive. This was the seat of much of the royal administration of Capetian and Valois France, although the King had largely given it up as a royal residence by this date in favour of the Louvre or other palaces.

Beautiful! And the colours are absolutely stunning in their clarity!
Thank you for sharing! I always enjoy a tour of the 'better things' in life!
All the best (and enjoy all the celebrations!!)