Celebrating St Alban and his abbey


In the modern Roman Calendar today, June 20th, is assigned as the commemoration of St Alban. His traditional feast day is his dies natalis and falls on June 22nd. This was his day until recent decades when June 22 was designated the joint feast day of St John Fisher and St Thomas More. There is a suitable complementarity that the martyrdom of the Cardinal Bishop of Rochester occurred on the anniversary of the protomartyr of Britain, but I regret that St Alban was displaced and that St John and St Thomas were not given July 5, which is the anniversary of More's beheading.

Furthermore whereas SS John and Thomas are, quite appropriately, celebrated as a feast, St Alban is merely a commemoration. Given that he is protomartyr and his cult of such long standing observance it would surely be fitting that he too be celebrated by a feast rather than a memoria. This is something the Bishop's Conference might consider seeking to do. Today, I suspect, his day and veneration is more an Anglican observance - and indeed the cathedral at St Albans has done much to promote his cult in recent years, as I illustrated in my post St Alban last year.

In that I wrote of my great affection for the noble if battered building that houses his shrine. Built in part out of Roman brick, and which, somehow, survived the dissolution, the reformation and subsequent neglect and then an overly-enthusiastic restoration in the late nineteenth century, it has an appeal that is in part made up of its vulnerability and the very fact of its actual survival at all.The Abbey, now an Anglican cathedral, is a venerable and continuing place of pilgrimage - I recall reading the Epistle as a Wakefield Diocesan Pilgrimage there in my Anglican days, some twenty and more years ago, and it seemed a very long walk to the lectern in that historic nave on such an occasion.

The nave of St Albans cathedral.
The paintings of the Crucifixion were for side altars in the medieval period.
Image: findthe postcode.com

It is also a building of quite exceptional historical and architectural interest, full of surviving wonderful treasures of medieval art and liturgical practice. 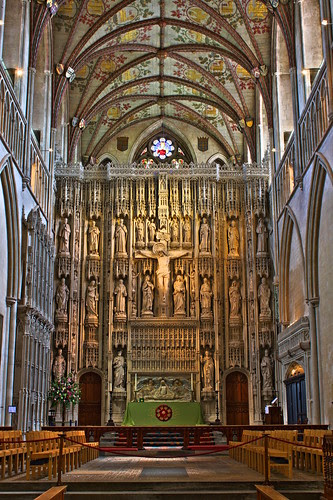 The wall paintings, the reredos, the brass of Abbot Thomas de la Mare, the tombs of Duke Humphrey (Humfrey) of Gloucester are well known, but there are many others, less well known. Amongst these, and relevant to my previous post, are two splendid label-stop portraits of King Edward II and Queen Isabella, and, now, the rediscovered and re-interred bones of the father of Pope Adrian IV.
.
With all this and its remarkable history St Albans is very well worth visiting if you have not been there, and that can all be combined with seeking the intercession of St Alban.


St Alban pray for us