The End of the Newman Society


Earlier this evening I was reliably informed that the Oxford University Newman Society has voted itself out of existence into union with CathSoc, the University Chaplaincy sponsored student group.

There is a history of the Society which can be read at the online article Oxford University Newman Society.
The Newman Society was founded in 1878 as the Catholic Club and in 1888 took its name with the consent of the Cardinal. As the account of its history shows it attracted many members over the years and is referred to in Brideshead Revisited.

I joined as a Life Member in, I think, 1994. Over the years I have attended Masses and dinners, as well as talks, and highlights have included Masses celebrated by Mgr Alfred Gilbey and by Archbishop Maurice Couve de Murville, and, more recently, the visit of Cardinal Pell.

As a Society its fortunes have varied and, sad to say, it has not infrequently in recent years been riven by factions and personal conflicts. Such is student politics that at times it appeared to split into what might be termed the Officials, the Provisionals, the Continuity faction, etc, etc - indeed I could claim to still be an office holder of the Continuity faction - or, perhaps I should say, as we saw ourselves, like the Carthusians, never reformed, because never deformed. 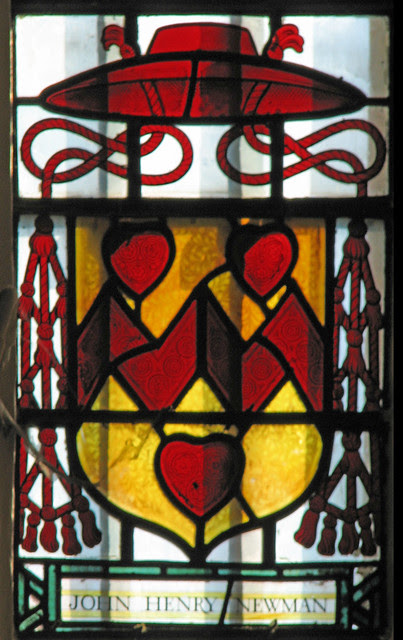 The arms of Cardinal Newman, which were used by the Society.
A panel from the windows in Oriel Hall.

I don't see what's to stop it from being revived, once the present chaplain and his followers have moved on. All it needs is a Senior Member to sponsor it and a small group of students who are prepared to do the work to make it happen.

Surely though this just means there's another weekday evening free for more interesting things? (Whatever happened to the Ronald Knox Society?)

The Ronald Knox Society voted to amalgamate with the Newman Society in Michaelmas 1990, on the understanding that there would be an annual RK lecture. I've still got some of the RK Society termcards, and the minute book of its meetings, somewhere in an attic ...

I seem to remember that the RK Society was refused either recognition and/or assistance by the university, on the grounds that it was 'sectarian'. I imagine that the same might happen to any revived Newman Society which didn't have official approval of the Catholic Chaplain to the University.

Surely one could better claim that the CathSoc has voted itself out of existence? My understanding is that the new body retains the Newman name.