Today is the feast of St Bridget of Sweden (1303-1373), interest in whom has revived in recent decades as a result of the designation in 1999 by Pope John Paul II of her as a co-patron of Europe, from the work of the modern Swedish restored Bridgettine Order, founded in 1911 by Bl.Elizabeth Hesselblad, and also from the work of historians looking at her influence on late medieval spirituality. In that last sense she is reminder of how much later medieval Scandinavia was part of Catholic Christendom. Devotion to her, and use of her spiritual techniques was widespread and appealed both to political elites and to the general populace. Here in Oxford relics of her were presented in the fifteenth century to Osney Abbey, which stood close to where I live. 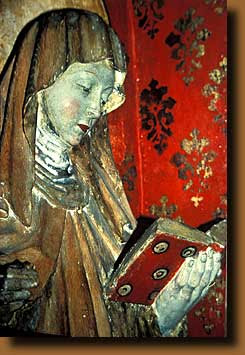 A statue of St Bridget at Vadstena,
the original mother house of the Bridgettine
Order
Image: american-pictures.com/genealogy/descent/photos/Holy.Birgitta-x.jpg

However in England her most enduring legacy is Syon Abbey. This was initially founded by King Henry V in 1415, and definitely established in 1420 at Isleworth in Middlesex. it rapidly became a centre for disseminating devotion and enjoyed a great reputation for its spirituality. One of thefirst victims of King Henry VIII was the confessor of the house, St Richard Reynolds (1492-1535).

The Angel of Syon

The monastery was suppressed by King Henry VIII, but the nuns remined together in the households of some of their families, returned to Syon under Queen Mary I, were again disperesed under Queen Elizabeth I, and travelled with the Spanish ambassador to take refuge in the Spanish territories in the Low Countries. Their original home is now partially covered by Syon House, where excavations have revealed the extent of the great church.

Taken under the protection of King Philip II they were forced to flee from the Netherlandish revolt and took refuge in Rouen, until they felt compelled to flee again following the French Wars of Religion in the 1590s, taking refuge unstill under King Philip's protection in Lisbon. There they stayed, an English community in exile surviving the Portuguese war of independence of the 1640s, the Lisbon earthquake of 1755, Pombal's Enlightenment reforms, the Peninsula War, a split in the community when some of the nuns returned to England in the early nineteenth century but eventually dispersed, and a final return in the summer of 1861. Settling in Dorset they then moved to Chudleigh and finally to South Brent in Devon early in the twentieth century. They are the sole surviving monastic community from the English middle ages.

This is all recorded in Canon J.R. Fletcher's fascinating history. A website about the abbey and with pictures of the life of the nuns, still following the Rule of St Bridget, can be seen at Syon Abbey. It is one of four surviving houses of the original congregation.

A few years ago I had the privilege of visiting the grounds of the abbey in Devon and did indeed glimpse an elderly nun talking her morning stroll through the grounds.

However I now hear that the community is so small and elderly that they are leaving South Brent and, I think, going to live under the care of other nuns, although I have not seen reports in print or online, so I am not sure. In recent years some of their treasures, including a pinnacle from the original gateway of the abbey, which they have carried with them in all their travels, have been deposited in other hands for safekeeping.

The pinnacle from the fifteenth century gateway of Syon Abbey

I understand that this St Bridget's day was being observed for the last time at South Brent. If I can find out more I will post about it.

To me it is tragic, heart-rending, that a community which had survived so much, and approaching its sixth centenary, is on the brink of extinction. The failure, for whatever reason, to recruit new generations to such a foundation is desperately sad. Syon has been a precious link which now hangs by the slightest thread.

Yes, the three remaining nuns of Syon Abbey have moved to Nazareth House in Plymouth (two of them are quite ill).
They are also the keepers of St Thomas More's hairshirt.

A very interesting post (as always!). Much obliged for sharing it!
Blessings,