The death yesterday of Otto of Austria at the age of 98 is the breaking of a precious living link to the past. 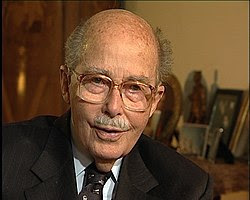 The obituary from the Daily Telegraph can be read here, and the Wikipedia biography is here.

The Mad Monarchist has three posts about him: Archduke Otto von Hapsburg 1912-2011, Archduke Otto, RIP and The Passing of an Archduke.

I once had the privilege of hearing Otto of Austria speak at a lecture he gave in Oxford in 1994. Sitting in the Gladstone Room of the Oxford Union I listened to this elderly distingushed looking man talking about pan-Europeanism and a vision for Europe and reflecting to myself, indeed almost pinching myself to believe the fact, that this was the very same man who, as a little boy clutching his parents hands, had attended the funeral of his great great uncle the Emperor Franz Joseph in 1916:

The Crown Prince Otto at the funeral of the Emperor Franz Joseph in November 1916.

The unnamed figure on the left is the Crown Prince of Sweden, later King Gustav VI Adolf who died in 1973.

As someone pointed out to me last night he was also the great great nephew of the Emperor Maximilian I of Mexico.

The obituaries bring out just how many of the major events of twentieth century history impacted upon his life. He lived long enough to see not only the freeing of his peoples from communist rule but to witness the beatification of his father in 2004.

In passing I would add that as one thinks about his life let no one fool you that the peoples of Austria-Hungary have been better off since 1918 without the benefits of Imperial rule. They have n't.
May he rest in peace.