The New Liturgical Movement has a post about Sir Ninian Comper and St Wilfrid's, Cantley, South Yorkshire, which is well worth looking at. 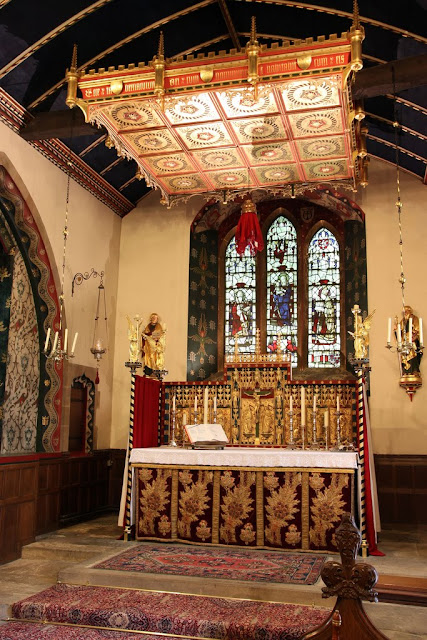 This exquisite church interior by Comper is his recreation of what he considered a late medieval English parish church might have looked like. The result may, conceivably, be more finely done than the originals were, but it is a delight.

I have only visited the church once, although it is in my home area, being just on the southern outskirts of Doncaster. In recent years an extension has been made, successfully in my opinion, to the small medieval building to create, in effect, a second, modern church reusing nineteenth century furnishings from an aisle added then to what was originally a simple medieval structure of chancel, nave and tower.

The adjacent country house, Cantley Hall, was owned by the Childers family, one of whom, Hugh Culling Eardley Childers was MP for Pontefract 1860-71 and 1872-85, serving as First Lord of the Admiralty, Home Secretary and later Chancellor of the Exchequer in the governments of Gladstone and Rosebery, and he is depicted in stained glass in the church as St Hugh of Lincoln.

His re-election in 1872 for the Pontefract seat was, incidentally, the first Parliamentary election by secret ballot.