Last Saturday the funeral of Archduke Otto, the de jure Emperor of Austria and King of Hungary was held in Vienna. 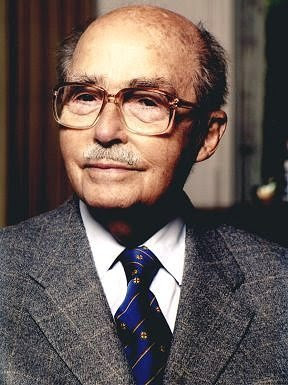 Image from Habsburg Monarchy.
There are a set of pictures here, and there is also a video of the funeral procession here.
As the friend who sent me the links wrote:"It all looked rather impressive. I'm glad that he has finally been afforded the dignity and respect he should have been afforded during his lifetime."
There is already along and detailed account of the funeral ceremonies on Wikipedia, which can be studied here. The account in The Daily Telegraph can be read here.

The Daily Mail has a very handsomely illustrated online feature about the burial in Vienna and in Pannonhalma which can be viewed here, although unlike the author of the article, I would not be so sure that this is the end of the Habsburgs. They have shown themselves remarkably adaptable over many centuries - I am tempted to see them as the most successful family business in European history, as opposed to the dynasties that are tied by history to a particular territory, such as the British and Danish royal houses

The procession from the Cathedral to the Capuchin church

The request for admission at the Capuchin church

On Sunday after aservice in Budapest his heart was interred at the Archabbey at Pannonhalma in Hungary. There are two reports with pictures about that ceremony here and here.

Lady Agatha Bottomswick-Smythe said...
This comment has been removed by a blog administrator.
19 July 2011 at 23:38