The Battle of Tewkesbury 1471

Today is the 550th anniversary of the battle of Tewkesbury in 1471. Together with the victory at the battle of Barnet on April 14th the Yorkists under King Edward IV had ensured his return to the throne and, seemingly, the elimination or neutralisation of the Lancastrian leadership. The Yorkist tenure of the throne appeared assured.
There are many accounts of the battle in books and online, and research continued into the events of the day. The battlefield lies in the edge of the town and although partly built over in the twentieth century along the line of the main road which crosses the site substantial parts remain undisturbed and are now protected following threats to build housing on part of the area. Guided walks are available and to walk through the Bloody Measow where so many are thought to have died fleeing towards the Avon on such a tour does raise ones sensibilities. The Tewkesbury Battlefield Society has done excellent work in raising and maintaining interest in the battle. Their website is at Tewkesbury Battlefield Society 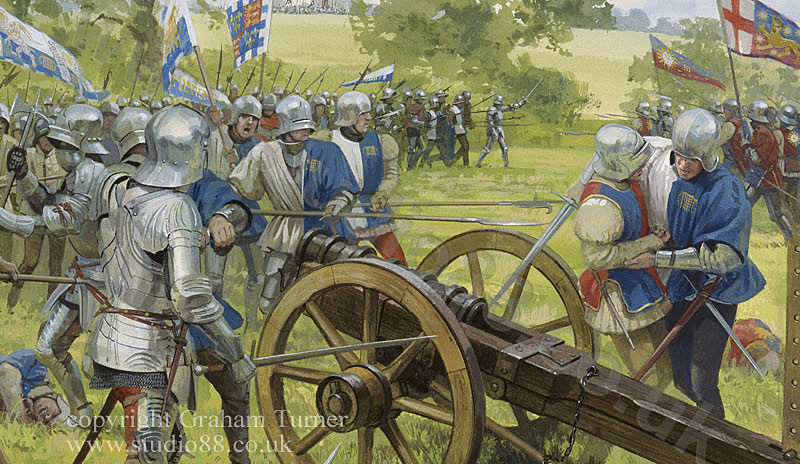 The Lancastrian artillery at the battle
Painting by Graham Turner
Image: studio88 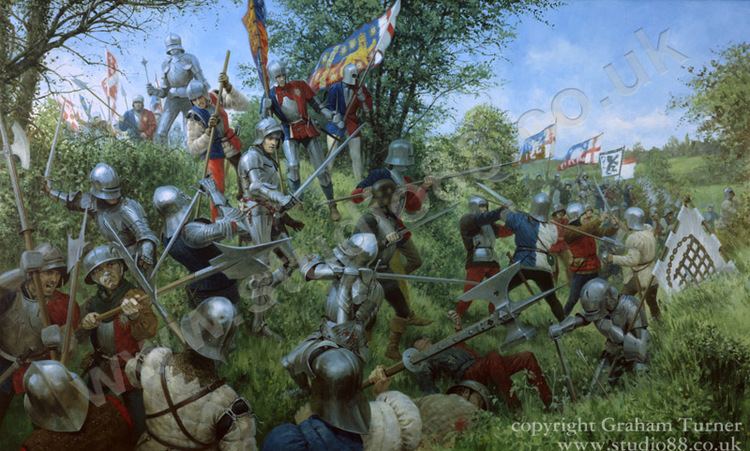 The two armies engage
Painting by Graham Turner
Image: studio88
Interest in the battle is encouraged by the annual re-enactment in the summer at Gupshill zmanor. This is now an inn but was standing at the time of the battle when it was more or less between the front lines. I have attended the re-enactment in several occasions and enjoyed that and the associated medieval fair with stalls selling armour - my favourite was called “Dressed to Kill” - medieval clothing, household wares and suchlike as well as book stalls, information stalls and it was there that I first became acquainted with the paintings of Graham Turner. It is these which have been used for the Royal Mail stamps that are currently being issued.
Tewkesbury has obviously changed greatly over the past five and a half centuries but it still has much that makes the battle seem more immediate. The town plan is basically unchanged and not a few of the buildings in the centre were standing in 1471. There is a good museum with displays on the battle and a scale model of the fighting.
Above all there is the abbey church. Tewkesbury possessed one of the truly greatest surviving Benedictine churches in this country. It has a massive Norman core and tower and a glorious fourteenth century choir and chevet. The array of chantries and stained glass from the patronage of the Despenser family still bears witness to a cultured aristocratic spirituality.
Following the battle no-doubt desperate defeated Lancastrians sought refuge in the abbey. The Abbot or one of his monks managed to hold King Edward off with the Blessed Sacrament, but the following day or the next the King, deeming it not to be a recognised place of sanctuary, had the refugees dragged out and dispatched by the headsman. Bloodshed occurred in the abbey which had to be ritually cleaned by episcopal authority st the end of the month. A couple of more seriously wounded men may have lingered in the abbey infirmary before dying of their injuries in coming weeks.
As one walks around a building that has a quiet and reverent, prayerful atmosphere the battle nevertheless seems close. The sacristy door is reinforced with what are said to be strips of armour gleaned from the battlefield, and the dead from the battle are around you. In the midst of the choir is a slab over the burisl place of Edward Prince of Wales and in the former Chspel of St James lie Lord John Beaufort and his cousin the Earl of Devon who were all killed in the battle. Two days later Lord John was joined by his brother the Duke of Somerset after he was beheaded. When I first visited Tewkesbury fifty years ago the chapel stood empty and quiet, with a small plaque given by the then Earl of Devon early in the twentieth century to commemorate his relative. Today that space houses the excellent abbey souvenir shop, and the plaque is concealed by the shop fitments. I rather regret that, but there is the odd sense for this who know that just beneath your feet are three men who gave their lives for the Lancastrian cause at Tewkesbury five and a half centuries ago.
That sense of contact with the past is strong at Tewkesbury, be it the battle and its context, the medieval lords of the town, the abbey and its community - all seen close. Once again T. S. Eliot’s “Little Gidding” comes to mind:

And what the dead had no speech for, when living,

They can tell you, being dead: the communication

Of the dead is tongued with fire beyond the language of the living.

Here, the intersection of the timeless moment

Is England and nowhere. Never and always.

I will post some more reflections on the battle in a couple of days and in the meantime would ask readers to pray for the souls of all who fought and died, then or thereafter at the battle of Tewkesbury.
Posted by Once I Was A Clever Boy at 19:07

I believe that the high altar of Tewkesbury Abbey reuses the reclaimed pre-reformation mensa. I remember being struck by its impressive proportion. It is certainly worth taking a few minutes of a visit simply to contemplate it.

You are I believe correct about the mensa. One of the many beauties of the abbey is the uncluttered layout of the presbytery and choir and the sense of space and dignity.
Certainly when I used to go fairly regularly the abbey had a strong Anglo-Catholic liturgical tradition that made full use of such a fine setting for sacramental worship.