Our Lady of Willesden

The Shrine of Our Lady of Willesden is the best known of the three in the wooded hills of medieval Middlesex - the others being Islington and Muswell - which attracted, and still attract, pilgrims.

The parish church of St Mary Willesden, home of the original Shrine and of the modern Anglican one.
The north aisle is a nineteenth century extension of the original church
Image: Wikipedia
There are accounts of history of the devotion from Wikipedia at Our Lady of Willesden, from andrew pink.org at Piecing together Our Lady of Willesden, from prayer4reparation at A SHORT HISTORY OF OUR LADY OF WILLESDEN (SHRINE), from interfaithmary.net at page, from ukgardenfiend at churches – Over the UnderGround and from the Archdiocese of Westminster at Our Lady of Willesden | Roman Catholic Church of Our Lady of Willesden
The following account is drawn from these six sources, to which I refer readers for their sources and further details.
King Athelstan gave the manor of Willesden-cum-Neasden to St Paul’s cathedral as an act of thanksgiving for his great victory at Brunanburh in 937 before his death in 939. It went on to become an endowment for one of the prebends of the capitulation body.
An inventory of 1249 records two statues of Our Lady in the parish church at Willesden, one of which must be assumed to be the object of pilgrimage. It appears to have been situated the chancel of the church.
Devotion appears to have increased in the later Middle Ages, but it is only from the early sixteenth century that we have any details. The statue was a Black Madonna. A description of the it by a Richard Mores in the sixteenth century described it as
robed in sarcenet [ a fine silk twill ] and with stones, with a vale withal of lace embroidered with pearles and other precious jewelles and golde and silver’ surrounded by a metal grille, and a canopy with hangings

Pewter pilgrim badge,
Our Lady of Willesden; the Virgin and Child within a crescent moon, 1466-1500. Museum of London 001349
This distinctive badge has often been found in the London area, although not in Willesden itself, and has been attributed to the Shrine
Andrew Pink has collected together references to the Shrine in the early sixteenth century, which I have adapted:

The earliest reliable mention of devotions to Our Lady of Willesden dates from 1502 when Queen Elizabeth (1466–1503), wife of King Henry VII sent money to Willesden and other Marian shrines across England, presumably to solicit prayers for the impending birth of her seventh child. Also, in February 1503, shortly after the Queen’s death, an allowance of money was paid:

to a man that went on pilgremage to our lady of Willesden by the quenes commaundement.

Hostility to the Shrine was also being recorded. In 1509 Elizabeth Sampson of Aldermanbury in London was accused of insulting the statue of Our Lady of Willesden and in 1521William Dorset of King’s Langley in Hertfordshire was accused of stopping his wife from making a pilgrimage to Our Lady of Willesden on the grounds that it was a waste of money.

In 1517 William Litchfield (var. Lychfeld, Lichfield &c), Vicar of Willesden and Chancellor of St Paul’s Cathedral died and was buried in the chancel of Willesden church before the image of the Blessed Virgin Mary. Litchfield also gave to the church a gilt chalice, ‘the same to remain to the use of the said Church and the honour of the Blessed Virgin for ever’ and this chalice is still in regular use. Litchfield’s memorial brass can be seen in the floor of the chancel.

In 1525 the two youngest daughters of St Thomas More (1478–1535) – Elizabeth and  Cecily – were married at Willesden, in a chapel (‘oratorio’) at the house of the MP Sir Giles Alington (1499-1586). He was the second husband (m.1524) of More’s step-daughter Alice Elrington (nee Middleton, d. before 1564). The house and chapel were two and a half miles from Willesden church at West Twyford;  property that came to Alington on his martiage to Alice, it having been the property of Alice’s first husband Thomas Elrington (d.1523).

Thomas More made reference to the shrine at Willesden in his Dialogue concerning heresies (1528/9). Later, in An Answer to Thomas More’s Dialogue (1531), the avowedly Protestant William Tyndale (c. 1494–1536) complained of those who endlessly repeat:

During 1527 the reform-minded priest Thomas Bilney (c.1495–1531), noted for his hostility to relics and pilgrimages in the 1520s, was arraigned for his preaching against pilgrimages, even doing so in Willesden church itself in Whitsun week that year saying
You do not well to goo on pilgremage to our Lady of Walsinghan, Ipswiche, or Wyllesdon, or to any other place and there to offer for they be nothing but stocke and stones, therefore it were better to tary at home and pray to God there.

Thomas More later stated that the character of his Protestant interlocutor in the Dialogue concerning heresies was actually based on Thomas Bilney.

More’s biographer Thomas Stapleton (1535-98) says that More regularly made pilgrimages on foot to shrines up to seven miles from London, thus encompassing Willesden. One such pilgrimage to Willesden was during the first week of April 1534, with More staying at the home of Giles and Alice Alington just days before his final arrest and eventual martyrdom.

In 1537 the Virgin is said to have appeared to a Dr Crewkehorne and said she wished to be honoured at Willesden as in time past, but he was unable to achieve that.
In 1538 the statue - the ladie of Wilsdon - was one of those burned on the infamous bonfire at Chelsea on the orders of Cromwell.
The memory of the pilgrimage lingered - in 1563 in the Second Book of Homilies the Elizabethan Church still warned against idolatrous invocations of our Lady of Walsingham, our Lady of  Ipswich, our Lady of Wilsdon and such other
Notwithstanding that there is once again a shrine in the historic Anglican Church. This owes its revival to the appointment in 1902 of Rev James Dixon as Vicar. He installed a gilded statue but it is suggested that this did not attract as much interest because it was not dark like the long list original. This deficiency was remedied in 1972 when the future Msgr Graham Leonard, then as assistant in the diocese of London as  Bishop of Willesden stranded for the carving of a new ebonies for statue by Catharine Stern which was placed in St Catherine’s chapel. The older statue was retained so once again, as in 1249 the church has two statues of Our Lady. 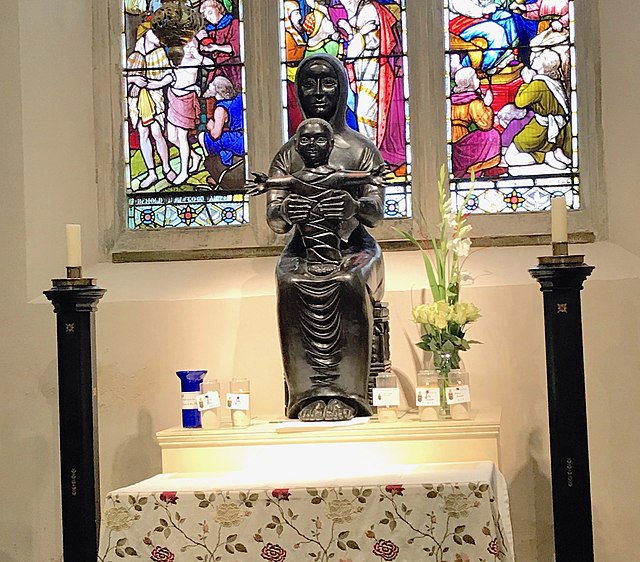 The Anglican statue of Our Lady of Willesden
Image: Wikipedia
In 1998 the original spring and well at the church were rediscovered and returned to the use of pilgrims. As at Walsingham there is a Chapter of Priest Associates and a lay companionate.
Meanwhile a Catholic parish had been initiated in 1885 and in 1892 Cardinal Vaughan blessed a nee statue of Our Lady of Willesden. A new church, containing on the north east a shrine chapel was built in 1931. In 1954 Cardinal Griffin solemnly crowned the statue at an open air Mass at Wembley and in 1958 St Josemaria Escriva, who visited on several occasions consecrated Opus Dei to the Name of Mary at the Shrine on the Feast of the Assumption. A Guild of Our Lady of Willesden was established in 2002 and the diocesan feast is on October 3rd.
The two shrines cooperate as at Walsingham as an ecumenical endeavour
Our Lady of Willesden Pray for us
Posted by Once I Was A Clever Boy at 19:06