The Translation of St Thomas of Canterbury

Today is the Feast of the Translation of St Thomas of Canterbury, and marks the anniversary of the removal in 1220 of his relics from the crypt of Canterbury cathedral to the newly built shrine in the a Trinity Chapel. There they remained until the shrine was despoiled in 1538. 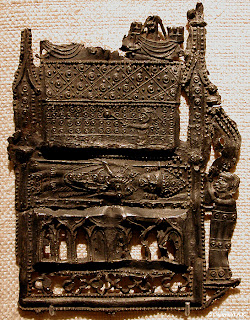 A Canterbury Pilgrim badge of 1350-1400
Image: Feasts, Fasts, Saints and Medieval Christianity
As probably the most popular pilgrimage site in England and in much of northern Europe, the shrine of St. Thomas at Canterbury became one of the most lavishly decorated shrines in Christendom. When the Cathedral was rebuilt after the fire of 1174, the east end was designed with the tomb in mind. Behind the high altar steps were built up into a sort of second chancel which formed a smaller gothic apse. Pilgrims could pass behind the choir stalls and the high altar and ascend into the apse, lit by the windows which recounted St Thomas’ miracles, to circumnavigate the shrine which was built in the centre of the Trinity Chapel. The shrine itself was a typical English one in its structure.  Created by the renowned Walter of Colchester the golden reliquary-coffin which contained the body of St. Thomas rested on raised arches into which pilgrims could crawl to be closer to the relics. Over the reliquary was another lid, in the same shape as the reliquary and draped in precious cloths. This could be lowered and raised to allow pilgrims to view the reliquary and to protect the precious shrine from thieves. Over most of the ensemble there was a golden net upon which the gifts of any pilgrims from smaller relics to jewellery to ex-votos were hung. On the ridge of the shrine chest were two model ships. It has been suggested they were to commemorate St Thomas’ flight into and return from exile in 1164 and 1170. A small figure points to a ruby, claimed to be the largest in existence and given in 1179 by King Louis VII of France. To the right another figure raises the cover of the shrine with ropes and a pulley. At the foot of the shrine was an altar and around the shrine were large, free-standing candlesticks. This kind of 'table shrine’ was very popular in England and can still be seen with remains of the shrines of St Frideswide at Oxford, of St Alban, of St Thomas Cantilupe at Hereford and of St Edward at Westminster. In around the year 1500, a Venetian pilgrim left this account of the shrine:
The tomb of  Thomas the Martyr, Archbishop of Canterbury, exceeds all belief.  Notwithstanding its great size it is all covered with plates of pure gold ; yet the gold is scarcely seen because it is covered with various precious stones, as sapphires, ballasses, diamonds, rubies, and emeralds ; and wherever the eye turns, something more beautiful than the rest is observed, Nor, in addition to these natural beauties, is the skill of art wanting ; for in the midst of the gold are the most beautiful sculptured gems, both small and large, as well as cameos ; and some cameos are of such a size that I am afraid to name it ; but everything is far surpassed by a ruby, not larger than a thumb nail, which is fixed at the right of the altar.  The church is somewhat dark, and particularly in the spot where the shrine is placed ; and when we went to see it the sun was near setting, and the weather was cloudy : nevertheless, I saw that ruby as if I had it in my hand. They say it was given by a king of .
The following is a list of the various shrines within Canterbury cathedral associated with St Thomas and the offerings made at them on April 18th, 1303. Each of these were relics associated with Becket's martyrdom. It was not uncommon in English cathedrals to build a separate shrine for the saint's head as at Lincoln with St. Hugh, Lichfield with St. Chad, and also at Croyland Abbey with St. Guthlac. Becket's crown - the top of his head which was sliced off when he was killed - was kept in a part of the Cathedral called 'Becket's Crown,' a chapel at the extreme east end which is circular in shape.
"At the Shrine of S. Thomas the Martyr, one brooch of gold.
At the same shrine in money: 7s.
At the Head of the same saint : 7s.
At the Point of the Sword where the saint underwent his martyrdom: 7s.
At the Cloak of the same saint: 7s.
At the Tomb of the same saint in the vault [ The original tomb in the cathedral crypt]: 7s."
From J. Charles Wall's Shrines of the British Saints
Adapted from Feasts, Fasts, Saints and Medieval Christianity
Every fifty years a Jubilee of St a Thomas was proclaimed. That of 1420 is the best documented as Archbishop Chichele successfully defended the right so to do against Papal claims that such a privilege was exclusively that of the Holy See.
One consequence of the current pandemic has been that planned commemorations at Canterbury hosted by the cathedral have had to be postponed to a new start date of December 29th.
One relic that was due to return to Canterbury was what is believed to be the tunic (? surplice or rochet ) splattered with his blood worn by St Thomas at the time of his murder - he was on the way to Vespers at the time. It is now held at Sta Maria Maggiore in Rome. It was examined in 1992 and scientists from Munich University confirmed that it was most probably authentic as it dated from the mid-twelfth century, and had been made for a very tall man, which matched descriptions of Becket from the period.
Fr Robert McCulloch of the Missionary Society of St Columban has said: 'The archives of the Basilica of Santa Maria Maggiore show that the tunic has been kept there since 1485. There is a theory that Henry VII gave the tunic of a great English saint and martyr to the then pope [ Innocent VIII ] because he wanted to please him as he was trying to get him to canonise Henry VI.

'If Henry VI was made a saint, Henry VII thought this would put his House of Tudor, with its links to the Lancastrian Henry VI, in a good light. It's ironic that his son, Henry VIII, then broke with Rome and had Becket's shrine destroyed.'

In recent years a relic of St Thomas has been brought back to Canterbury on a visit from Esztergom in Hungary.

At Sens cathedral in France are vestments - chasuble, stole, maniple and episcopal shoes, together with an alb - associated with St Thomas from his time there in exile in the 1160s. At one time these were used on the feast day of St Thomas at Sens and on those occasions the cathedral authorities had to use the tallest of their clergy and then pin the vestments up, testimony to St Thomas’ height. Copies of these are held by the cathedral in Canterbury 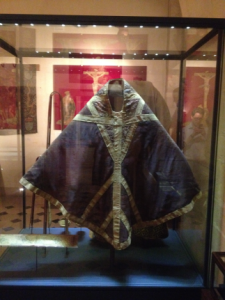 Chasuble in Sens Cathedral treasury thought to have been worn by Thomas Becket and venerated as a contact relic
Image: kent.ac.uk
What is traditionally regarded as a mitre belonging to St Thomas was given to Cardinal Wiseman by the then Archbishop of Sens and can be seen in the V&A, though their detailed website account of
it, which can be seen at Mitre - Victoria & Albert Museum - Search the Collections,
is doubtful as to the specific link, although regarding the dating it is certainly possible.
When I was actively involved in the life of the church of St Thomas the Martyr here in Oxford - founded about twenty years after the murder of the saint - the patronal feast was always observed on ‘St
Thomas’ Sunday’, the one closest to July 7th. This also meant that, as in the middle ages, the saint could be commemorated with appropriate celebrations without clashing with Christmastide on his other feast day, that of his martyrdom on December 29th.
For those interested in learning more about St Thomas and his times there are, of course, numerous biographies and studies including the biography of the Archbishop by Frank Barlow, the works of Dom David Knowles - perhaps now rather dated - and the massive life of King Henry II by W. L. Warren. In addition there is the blogspot Constitutions of Clarendon which has numerous posts about the conflict between King and Archbishop. I will add it to the side bar for future reference.
St Thomas of Canterbury Pray for us
Posted by Once I Was A Clever Boy at 14:00

If I am not mistaken...the Catholic Church in Canterbury has a relic of St Thomas given by the bishop of Gubbio in the 19th century- a predecessor having acquired it at the time of the translation.

Thank you for that additional information. It is, unfortunately a long time since I was in Canterbury but I do recall seeing the church of St Thomas from the outside. The fact that relics of him went to Italy and Hungary in the early days of his cult bears further witness to its spread, as witnessed in artistic representations of his murder. He turns up as the subject of paintings by German artists in the fifteenth century.