The Imperial Monumental Halls and Tower

Last week a friend and I found ourselves discussing online the 1904 proposal, or perhaps suggestion, for the Imperial Monumental Halls and Tower at Westminster. Envisaged as an extension to Westminster Abbey and a celebration of Empire it never went beyond the stage of plans and artist’s impressions. If it had been built to some today the complex would doubtless be very far from politically correct, yet to others might also be as much part of London and what it embodies as St Paul’s or Big Ben. 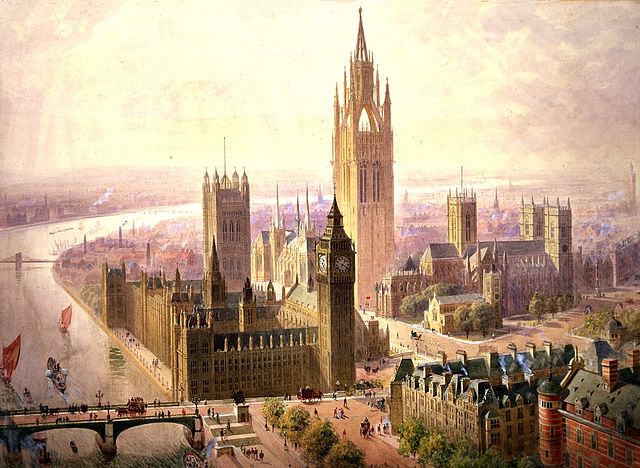 Lamb and Seddon's 1904 design for the Imperial Monumental Halls.
The tower would have been the tallest building in the UK, and halls have a similar floor area to the Abbey..
Several different pictures from different angles were created.
Image: Wikipedia
There are accounts of the proposals, their background and pictures at Unbuilt London: Imperial Monumental Halls | ianVisits – London news and events, at

The design is full of the Spirit of the Age. Spectacular church building projects on the scale of Liverpool Anglican cathedral and the then newly erected Westminster Cathedral were still possible. City centres such as Cardiff in this country, fin de siecle Paris, and King Leopold II’s Brussels were enthusiastically created. In Berlin Emperor Wilhelm II donated what became known irreverently as the Puppenalle - the  Siegesallee - and there was the newly built Lutheran cathedral, whilst elsewhere the Kaiser built his palace at Posen/Poznan. Not long before King Ludwig II in Bavaria had created his famous castles whilst in Budapest the royal palace and areas like the a Fisherman’s Bastion and the other celebration of historic nationhood were put up around the 1896 milleniary to rival the joint capital in Vienna. The King Victor Emmanuel Monument towered over Papal Rome to celebrate Italian unification. Further afield in Ottawa the Peace Tower was added in 1919 to the Parliament building and there was to be the founding of New Delhi in 1911. This was an era that unashamedly thought, and built, in grand terms and gestures,

Had the building ever been built it would have dwarfed the Abbey - its shadow is depicted falling across the church on some of the impressions of what might have been. The Palace  of Westminster would also have been dwarfed. In reality it would have been too massive and completely out of scale with historic Westminster.
That said it could as a centre for Imperial studies it could have been a practical asset and an addition to the cityscape of the capital. To do that successfully it would have had to be built further along Millbank. Had that happened it might well have become a genuine enhancement to the banks of the Thames. It would certainly be better than the London Eye or so much of the recent accretion of glass, steel and concrete towards Lambeth Bridge.
The project is an intriguing might-have-been  but also a striking example of folie de grandeur, and perhaps a hint of calming fears about the future by celebrating the past.