Coincidentally I came upon two online features this week which pertained to the nature of Roman Imperial rulership.
The first was an article in the Times Literary Supplement by Dame Mary Beard in which she  reflects upon re-reading Fergus Millar’s The Emperor in the Roman World (1977) and on the  historiographic issues that the book generated.   It is not my subject area but I think Professor Beard makes good points in what she writes. Her article can be seen at How to be a Roman emperor | Essay by Mary Beard
The second was another chance find, a piece from last year on Artsy.net about Roman sculpture which can be viewed at 7 Ancient Roman Sculptures You Need to Know One of the seven examples that is used is, I imagine, the quintessential portrayal of the Emperor Augustus. The accompanying notes seem to tie in with the Beard critique of Millar, and I have copied them, together with the image and posted them below
Augustus of Primaporta, perhaps an early first century copy of a bronze statue of circa 20 BC.
Marble, originally coloured.
Musei Vaticani, Rome
Image: Wikipedia

After he ended a century of civil war, Augustus ascended to power to become the first emperor of Rome. Augustus was an avid supporter of public art and he used his commissions to legitimize his newly-created role. He ordered around 70 portrait statues of himself. Collectively, they suggest his noble lineage stretching back to Romulus, the founder of Rome.

This full-body marble statue, dated to the 1st century AD., was found in the ruins of the Villa of Livia (Augustus’s wife) at Prima Porta and is now on display at the Vatican. It highlights Augustus’s military might and refers to the Republic’s past golden age, to which, under his rule, he purported to return. Illustrating those ambitions, Augustus’s breastplate highlights a personal diplomatic victory: it shows a Parthian king reinstating military standards previously captured from Roman legions. And to reinforce the emperor’s divine right to rule (and his divine lineage), Cupid, son of the goddess Venus, stands at Augustus’s right ankle.

Strict verism is rejected here; instead, Augustus is presented as an idealized figure, with an athletic body more representative of a classical Greek sculpture than a realistic Roman emperor. His head and body recall a 5th century B.C. statue of Doryphoros, or spear-bearer, by the Greek sculptor Polykeitos. The statue is identifiable as Augustus by the locks of hair that Augustus’s official artists always included to make all statues of the emperor identifiable to the Roman public. 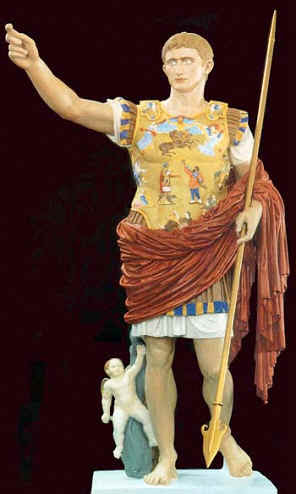 A reconstruction of the colouring of the statue
Image:mbradtke.de
Posted by Once I Was A Clever Boy at 22:43