Today is the Feast of St James the Great. He is, of course, the Patron of Spain with his great shrine at Santiago de Compostella.
Amongst the many treasures accumulated by the basilica there is a physical reminder in the surviving gift of an English pilgrim priest from the Isle of Wight in 1456.
Ralph Hodd of Ventnor in his useful piece on pilgrimage for the Isle of Wight Catholic History Society writes as follows: “There are, however, a number of links with the major Spanish shrine of Santiago de Compostella and given the place of the Isle of Wight in relation to trade routes to Gascony and northern Spain, this seems to have been a destination favoured by Island pilgrims.”

Medieval English exports of wool to the Low Countries was more than balanced by imports of wine from the English controlled ports of Bordeaux and Bayonne in Gascony, and from northern  Spain.

“In the early years of the sixteenth century fleets of well over a hundred vessels would gather off the Isle of Wight before sailing south to collect the produce of the wine harvest. It was not uncommon for the masters of these vessels to make an additional profit by conveying pilgrims on the seaward leg of their journey to the shrine of St.James at Compostella. If Compostella pilgrims were present on vessels heading out or returning to the Island, the light of St.Catherine’s would have been a significant symbol on their journey.”

The lighthouse - the only surviving medieval example in Britain - which was once adjoined by an oratory staffed by a priest, dates from the early fourteenth century and its history is available at History of St Catherine’s Oratory and St. Catherine's Oratory

Hodd continues “It is perhaps significant that there are two specific references to an Isle of Wight connection with Santiago de Compostella and these add substance to the possiblity that this shrine held a particular attraction for pilgrims from the Island.”

The first of these is the gift from 1456. This is an English alabaster portable retable, given to the Galician shrine in that year by John Goodyear, a priest of Cheil or Chale in the diocese of Winchester. 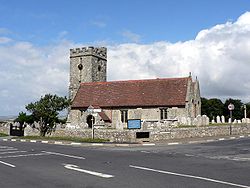 The Church of St Andrew at Chale

It was a Santiago Holy Year, a Jubilee which is declared whenever St James’ Day falls on a Sunday, as it will in 2021. Hodd suggests that perhaps the surname of the donor is more than a coincidence, and continues: “John Goodyear was not the rector of Chale, but the quality of his gift implies that as well as being in holy orders, he was a man of some means. If Cheil is indeed, Chale, Isle of Wight, it may not have been difficult to obtain passage to Spain, given the pattern of the wine trade.”

As the record in the Winchester episcopal registers of appointments to Chale appears to be missing it is not actually clear if Goodyear was the incumbent or not, as Hodd asserts. The formal deed of gift ( vide infra ) does in fact describe him as Rector.  It does occur to the Clever Boy that if John Goodyear was not the incumbent of Chale could he possibly have been the custodian of St Catherine’s Light?

Hodd continues:“A later, substantial reference to Islanders making pilgrimage to Santiago is made by Sir John Oglander in his Royalist Notebook. Although this was recorded in the first half of the seventeenth century, it contains anecdotal evidence about this practice from the early years of the sixteenth century. Sir John records that,

‘There was a great pilgrimage to St.James of Compostella in Portugal, whither many of our Island have foolishly travelled, either for their soul’s health (as they believed) or for their bodies. The Lady Worsley, wife to Sir James, daughter and heir to Sir John Leigh, was the last of our Island that underwent that pilgrimage. She carried many old women with her, and some young, of which lived in my time that have related the passages of their journey to me‘.

Hodd adds: “Given that it was the practice of the wine fleet to gather off the Isle of Wight, it is possible that Puckcaster Cove at Niton, provided a point of embarkation for pilgrims to Compostella as it was considered a suitable anchorage and landing place ... It is the shine of St. James at Compostella that appears from those sources still available to us be the most significant consistent element in the practice of pilgrimage on the Isle of Wight in the middle ages. Realistically though, this would only have been an option for those of means.”

Everything indicates therefore that Goodyear and his gift arrived following the itinerary of the ‘English Way’ aboard one of the ships that in 1456 brought more than 800 pilgrims to the port of La Coruña, from the southern ports of  England.
That year another English traveller, William
Wey, who wrote a pilgrim’s guide for the land route to Compostella entitled Informacon for Pylgrymes, stayed for three days in La Coruña  before sailing home and heard an English friar preaching in the local Franciscan church. In the harbour he counted eighty foreign vessels, thirty two of them English.
There is apparently no mention of John Goodyear in Constance Mary Storr's Jacobean Pilgrims from England to St James of Compostella from the early twelfth to late fifteenth century. She lists the names of 17 ships and their license holders who carried pilgrims from England to Galicia in that Holy Year of 1456.
Goodyear may have been to Compostella previously for all we know and may have wished to return with his altarpiece, perhaps in thanksgiving for the intercession of St James. The fact that he journeyed there, possibly on a second visit, when he could have visited probably more easily, to modern eyes, the main English shrine of St James at Reading Abbey suggests commitment on his behalf. That commitment involved taking not just himself but the altarpiece by sea and then overland to the cathedral in Santiago.
Once in Santiago, he gave the alabaster altarpiece as an offering to the Apostle. It is popularly known as the Goodyear Altarpiece and there is an article about if from the Antiquaries Journal in 1926 which is accessible at A Datable English Alabaster Altar-piece at Santiago de Compostela | The Antiquaries Journal. It is unique amongst surviving English alabasters in depicting the St James and the story of his Apostolate in five panels.
They show, from left to right, the calling of SS James and John from mending their father’s nets, Pentecost and the sending forth of the Apostles on mission, St James preaching, his martyrdom by Herod Agrippa and finally his body being conveyed by boat to Galicia.

The Goodyear Altarpiece
Image: gram.es/Santiago de Compostella cathedral
A document, written in Gallegan Spanish and still in being, sets forth how there appeared before its writer, with witnesses, at the high altar, on the 25th day of May, 1456, ‘a man who said that he was of the nation of the Kingdom of England, by name called Johanes Gudguar, rector of the church of Cheilinvvintour diocese ’, who, for service of God and reverence for the very holy Apostle ‘Sebedeu ’ [ i.e. St James as the son of Zebelene, not the son of Alphaeus ] and for the benefit of his sins, gave to the Compostelan church a retable of wood with figures of alabaster, painted with gold and blue, setting forth the history of the said holy Apostle.
The English priest, however, made his donation conditional on the altarpiece "not being sold, pawned or exchanged or given to any other place or shrine", making the conscience of the archbishop and that of his successors the guarantor of his purpose. He also requested that it be placed on the main altar of the cathedral or in the place where the beneficiaries of the see warned that it was a worthy space.  He also reiterated that it had to be located in any case "within the body of said church and not outside it."  It was placed in the old treasury and passed, with other precious goods donated by the pilgrims, to the new relics chapel;  hence it is considered incorporated into the treasury of the basilica.
Approaching six centuries and countless upheavals later it is still there. In recent years some parishioners from Chale undertook the Camino and took a new gift to the cathedral to renew the link, 555 years later.
Another tangible link with the Pilgrimage to Compostella from these northern islands in the fifteenth century survives in a fragment of window tracery from the now destroyed church at Iniskeen on Upper Lough Erne in County Fermanagh. It is illustrated and placed in its historical context in iniskeen-window which outlines the pilgrimages made by two of the Maguire Kings of Fermanagh in the period.
There are many online resources about the Camino to Compostella.
Edwin Mullins’ The Pilgrimage to Santiago combines a readable history and travelogue of the route through France and northern Spain on the Chemin St Jacques and draws attention to the wonderful artistic legacy of the medieval Church along the way.
Posted by Once I Was A Clever Boy at 00:25