The Kingdom of Kongo

The latest Minute Missive from FSSP which turned up in my inbox yesterday morning has a very interesting article about the Christian Kingdom of Kongo which existed as a governing institution from the early sixteenth century until 1914. The article concentrated on its founder and can be seen at Afonso I: the Constantine of the Congo
Now I must admit that apart from a vague awareness that there had been an African Christian kingdom in that region in the period the story of the Kings of Kongo was otherwise entirely new to me. The coat of arms adopted by King Afonso I of Kongo  and depicted circa 1528-41
Image:FSSP
If like me you are intrigued by the story Wikipedia can add more substance with articles on the Kingdom of Kongo and on

Afonso I of Kongo. There is also a List of rulers of Kongo. The ecclesiastical history is recounted in the Catholic Church in Kongo, which includes the home grown heretical Antonian Movement st the beginning of the eighteenth century, of which I had read something beforehand.

It is a history almost worthy of H. Rider Haggard, John Buchan or Evelyn Waugh, and one which is not dissimilar to that of Europe in the conversion period from the late fifth to eleventh centuries. Gregory of Tours and St Bede would have understood the situation very well indeed.
The reign of King Afonso I shows a fascinating blending of African culture and practice with that of Catholic Portugal and Christendom at a significantly early date.
The rulers of Kongo adopted European forms whilst retaining their traditional governmental structures and traditions. The closest British colonial parallel I can think of is the way in which in the nineteenth century the Kingdom of Tonga retained its own monarchy, which became Methodist in the process, under a protected status until modern full independence, and blended names and symbols in the process.
The story of Kongo is not so stable or happy, and it is one that has some positive, and some negative sides. In 1914 the new Portuguese republic incorporated what remained of the kingdom, which had been a vassal or protected state since 1888, into their Angolan colony.
Even so this was not the end of the monarchy. 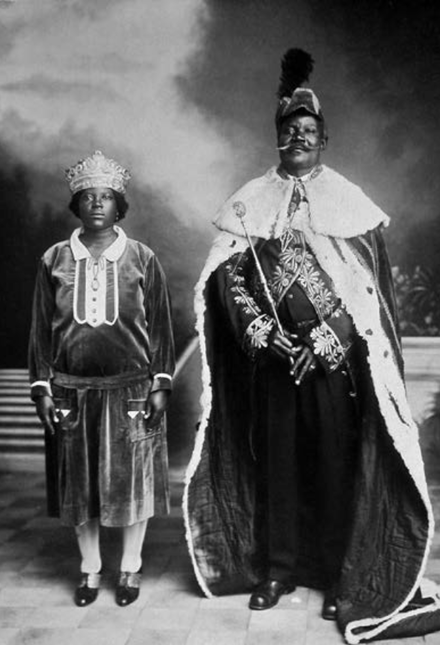 King Pedro VII and Queen Isabel, claimant King and Queen of Kongo, pictured in 1934
The King looks to be aiming to look like King Carlos I of Portugal
Image: Wikipedia
The present claimant king, since November 19th 2000, is Dom Josè Henrique da Silva Meso Mankala. He was born in 1942 and is said to be the grandson of King Pedro VII. He serves as head of the royal family and leader of the Kongolese nobility.
Posted by Once I Was A Clever Boy at 00:34