Now what time was it exactly...

Today I came across an online article about using astronomical techniques to fix the time at which a photograph was taken or at which a painting is set. The example it examined in detail is Jan Vanmeer’s painting of his home city of Delft for which it established a date and time of about 8am on September 3rd 1659. 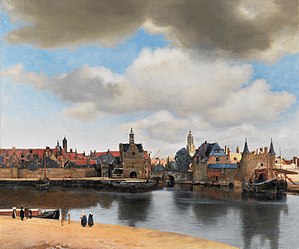 Jan Vermeer  View of Delft
Image: Wikipedia
The article can be viewed at New analysis prompts rethinking of date, time for Vermeer’s View of Delft
There is an account of the artist’s life and work, including a discussion as to his possible use of optical devices to assist him in his draughtsmanship, at Johannes Vermeer
I have known this picture from being a small boy as we had a reproduction of it at home. Looking at the Wikipedia article about the painting, which has a photograph of the city from the same viewpoint as it is today, I think Delft appears less attractive now than it did in 1659 - but then I would say that of most places. In the case of Delft Vermeer has left later generations an exquisite evocation of that city on an early September morning.
Posted by Once I Was A Clever Boy at 18:25