Today, were it not a Sunday this year, would be the feast of St Christina of Bolsena.

Phyllis Jestice posted about her cult on the Medieval Religion discussion group in 2004 and 2008 as follows:

Christina of Bolsena (3rd cent.) The Roman Christina converted to Christianity while still a girl throught the influence of her grandmother. Legend says that she then went around her parents' house destroying all the cult images, and when her father reacted by throwing her into Lake Bolsena with a rock tied around her neck she was miraculously saved from drowning. She then---legend goes on to report---had her tongue cut out and survived five days in a furnace, after which she was finally killed with arrows.

Christina of Tyre (?) This Christina's legend seems to be mixed up with that of Christina of Bolsena. She was a young girl, imprisoned for her Christianity, tortured extravagantly---a fire was lit under her but got out of control and burned 100s of people to death; her breasts were cut off and milk flowed from them; her tongue was cut out but she spoke even more clearly than before and when she threw her tongue at the judge he lost the sight of an eye; best of all, when she was thrown into the sea she was baptized by Christ and returned to land by the archangel Michael.

This year John Dillon has posted the following piece on the Medieval Religion discussion group: 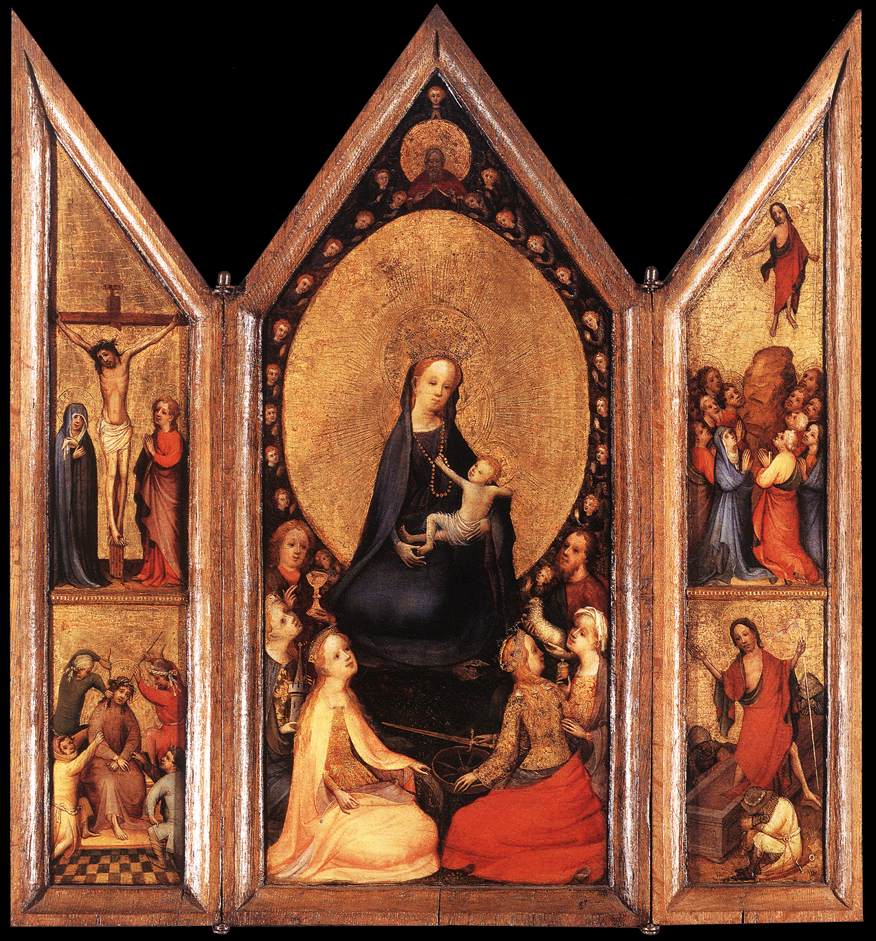 http://tarvos.imareal.oeaw.ac.at/server/images/7003973.JPG
q) as depicted (martyrdom) by the court workshop of Frederick III in a mid-fifteenth-century copy of the Legenda aurea (1446-1447; Vienna, Österreichische Nationalbibliothek, cod. 326, fol. 134r):
http://tarvos.imareal.oeaw.ac.at/server/images/7006857.JPG
r) as depicted (martyrdom) in a later fifteenth-century copy of Vincent of Beauvais' Speculum historiale in its French-language version by Jean de Vignay (1463; Paris, BnF, ms. Français 51, fol. 71r):
http://tinyurl.com/3xfm3ep
s) as depicted (at right; at left, St. Paul) by Sano di Pietro (d. 1481) in the lower right panel of an altarpiece in the basilica di Santa Caterina in Bolsena: 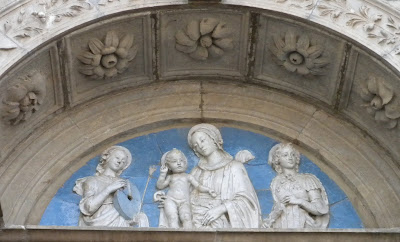 http://www.santacristinadibolsena.it/immagini/storia-santa-cristina/2013/2.jpg
dd) as depicted (at upper left in the wing at right) by Joos van Cleve the Elder in an early sixteenth-century altarpiece (1515) in the Wallraf-Richartz-Museum in Köln [ A fascinating image that will not fit into my format - well worth looking at  - Clever Boy ]:
http://tinyurl.com/jc4j7e8
ee) as depicted by the Master of Georgenberg Legend of St. Anthony in a panel of an early sixteenth-century altarpiece (c. 1515-1520) in the church of St. Margaret in Mlynica (Okres Poprad), Slovakia:

ff) as depicted (at left; at right, St. Oliva) by Tommaso de Vigilia (attrib.) in a later fifteenth-century remounted fresco (c. 1470; from the chiesa di Santa Maria in Risalaimi, a locality of Misilmeri [PA] in Sicily) in the Galleria regionale di Sicilia in Palermo:
https://misilmeriblog.files.wordpress.com/2009/02/affresco5.jpg


Back in 2008 another contributor to the group posted about the annual pageant of S. Cristina in Bolsena, which I assume originated as a medieval mystery play, as follows:


"At Bolsena Cristina's Passio is re-enacted annually (with hunky male torturers; in the developed legend she's said to have possessed great physical beauty). Views of one such pageant are at the foot of this page:
http://www.basilicasantacristina.it/html/culto.htm
And here are others:
http://www.eventiesagre.it/?id=1266
http://www.canino.info/inserti/tuscia/feste/santa_cristina/index.htm"


Now that really is a case of "Well, we don't do that at our church " and indeed might make even the most fervent supporters of reviving traditional paraliturgical practices think twice. Or perhaps not.