To mark the anniversary here are three contemporary or nearly contemporary images of the Pope and  some quotations from him. 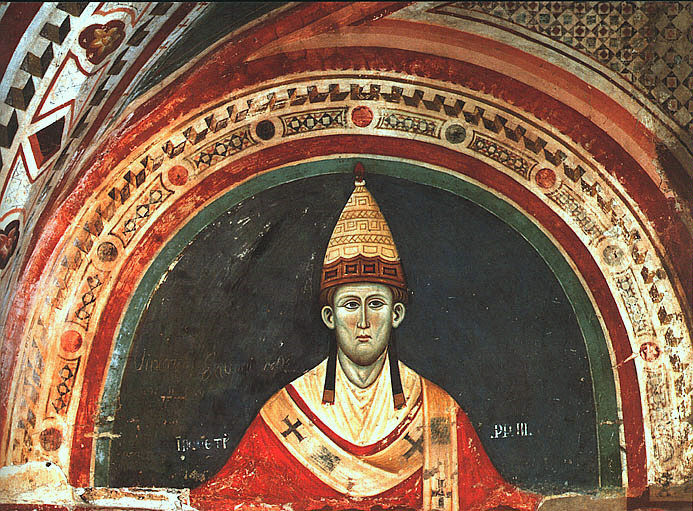 At his consecration he said in his sermon

" Only Peter was given fullness of power. You see, then, who is placed in charge of the household: it is Jesus Christ's vicar, Peter's successor, the Lord's anointed, the Pharoah's god. I am placed between God and man, below God but above man; I am less than God but more than man; I am he who will judge all and be judged by none."

The unmeasured assertion of his dignity, with the loudest protestations of humility, betrays the real spirit of the pope. Thus he spoke out: "Ye see what manner of servant that is whom the Lord hath set over His people; no other than the vice-gerent of Christ, the successor of St. Peter. He is the Lord's anointed; he stands in the midst between God and man; below God, above man; less than God, more than man. He judges all, he is judged by none, for it is written, 'I will judge.' But he whom the preeminence of dignity exalts, is lowered by his office of a servant that so humility may be exalted, and pride abased; for God is against the high-minded; and to the lowly he showeth mercy: and he who exalteth himself shall be abased."

Pope Innocent also discovers the Papacy in the Book of Genesis: "The firmament," he says, "signifies the church. As the Creator of all things hath set in the heavens two great lights, the greater to rule the day, the lesser to rule the night, so also hath He set up in the firmament of His church, two great powers: the greater to rule the souls, the lesser to rule the bodies of men. These powers are the pontifical and the royal: but the moon, as being the lesser body, borroweth all her light from the sun; she is inferior to the sun both in the quantity and quality of the light she sends forth, as also in her position and functions in the heavens. In like manner the royal power borrows all its dignity and splendor from the pontifical, so that the nearer it approaches the greater light, the more are its rays absorbed, and its borrowed glories eclipsed. It was moreover ordained that both these glories should have their fixed and final abode in this our land of Italy, inasmuch as in this land dwelleth, by and through the combined primacy, of the Empire and the priesthood, the entire foundation and structure of the Christian faith, and with it a predominant principality over both!"

"We decree that no Christian shall use violence to compel the Jews to accept baptism. But if a Jew, of his own accord, because of a change in his faith, shall have taken refuge with Christians, after his wish has been made known, he may be made a Christian without any opposition. For anyone who has not of his own will sought Christian baptism cannot have the true Christian faith. No Christian shall do the Jews any personal injury, except in executing the judgments of a judge, or deprive them of their possessions, or change the rights and privileges which they have been accustomed to have. During the celebration of their festivals, no one shall disturb them by beating them with clubs or by throwing stones at them. No one shall compel them to render any services except those which they have been accustomed to render. And to prevent the baseness and avarice of wicked men we forbid anyone to deface or damage their cemeteries or to extort money from them by threatening to exhume the bodies of their dead...."


Fordham UP  Medieval Sourcebook: Innocent III:Letter on the Jews  Jan 1 1199