King of Sweden at 70


Today is the seventieth birthday of the King of Sweden and this is an account of the celebrations from the website Royal Central. I am reproducing it because unless you subscribe to such links the British press give scant coverage to such events abroad.

H.M. The King of Sweden
Image:hellomagazine.com

At 08:00 the final day of a week-long birthday celebration for The King began with 43 Swedish flags being raised on Skeppsbron accompanied by a soundtrack of the Life Guards Music Corps. A traditional Te Deum thanksgiving service in the Royal Chapel at the Royal Palace of Stockholm followed at 10:00. At 10:25 the Swedish Navy’s Music Corps marched and performed a musical program in the Outer Courtyard and at 11:30 a changing of the guards ceremony was carried out by the Royal Guards. The presentations were open to members of the Swedish public and there was an opportunity for children to present flowers to The King before a twenty-one-gun salute was fired from Skeppsholmen.


The King and his family are scheduled to appear on the Lejonbacken Terrace for a choral tribute later today before The King and Queen travel by carriage in a royal procession from Mynttorget to Stockholm City Hall via Vasabron and Tegelbacken where they will attend a lunch arranged by the city of Stockholm.


A reception will be held at the Royal Palace this afternoon and will be attended by members of the Riksdag, the Cabinet and the county governors. The day’s birthday celebrations will conclude this evening with a royal banquet in the Hall of State at the Royal Palace.


The week so far:


On Tuesday 26 April, The King and Queen attended a birthday concert put on at the Royal Chapel at the Royal Palace by the Armed Forces Music Corps’. Hosted by Horace Engdahl the concert saw performances by Court Singer Karl-Magnus Fredriksson, the Swedish Navy's Music Corps (conducted by Andreas Hanson) and St Jakob's Chamber Choir (conducted by Gary Graden).


On Thursday 28 April a reception was held in Princess Sibylla’s Apartments to allow authorities, organisations and institutions an opportunity to congratulate The King on his birthday.


On Friday 29 April a reception was held at the Royal Palace for representatives of governmental authorities and NGO organisations which allowed them an opportunity to offer their congratulations to His Majesty The King. This was followed in the afternoon by a presentation in the Golden Foyer at the Royal Opera of a new cooperation between the royal artistic and humanistic academies—the Bernadotte Programme. The evening saw a concert at the Nordic Museum with performances from the Royal Opera and the Stockholm Concert Hall.


He became King of Sweden at 27 years old following the death of his grandfather in Helsingborg on 15 September 1973. His father had tragically died in airplane crash in 1947.  He took the royal oath in front of the Swedish Government in the Cabinet Meeting Room on Wednesday, 19 September before appearing in front of the Riksdag, the diplomatic corps and the Royal Court in the Hall of State at the Royal Palace of Stockholm.


He met Miss Silvia Renate Sommerlath at the 1972 Olympic Games in Munich where she was working as an interpreter and hostess for the games. Their engagement was announced on 12 March 1976 at the Royal Palace of Stockholm and they were married in Stockholm Cathedral on Saturday 19 June 1976.


The King and Queen have three children (Crown Princess Victoria, born 14 July 1977, Prince Carl Philip, born 13 May 1979, and Princess Madeleine, born 10 June 1982) and five grandchildren (Princess Estelle, born 23 February 2012, Princess Leonore, born 20 February 2014, Prince Nicolas, born 15 June 2015, Prince Oscar, born 2 March 2016 and Prince Alexander, born 19 April 2016).
Quite apart from wishing His Majesty well on his birthday I like to reflect that when he succeeded to the throne in 1973 the media commentators were writing off the Swedish monarchy - the age difference between the King and his grandfather, the social democratic culture of the country, its 'progressive' nature and the proposed revision of the Instrument of Government ( not in fact as we were told a 'new constitution' and introduced in 1974 ) - all presaged the end of the monarchy.  Well not so far, and with his Queen at his side and with his children and grandchildren King Carl XVI Gustaf can be seen as a successful contemporary exponent of the art of kingship. Moreover, for all the talk of Scandinavian monarchies being low key, as the report above makes clear the Swedish Crown is suitably ceremonious as and when it celebrates. 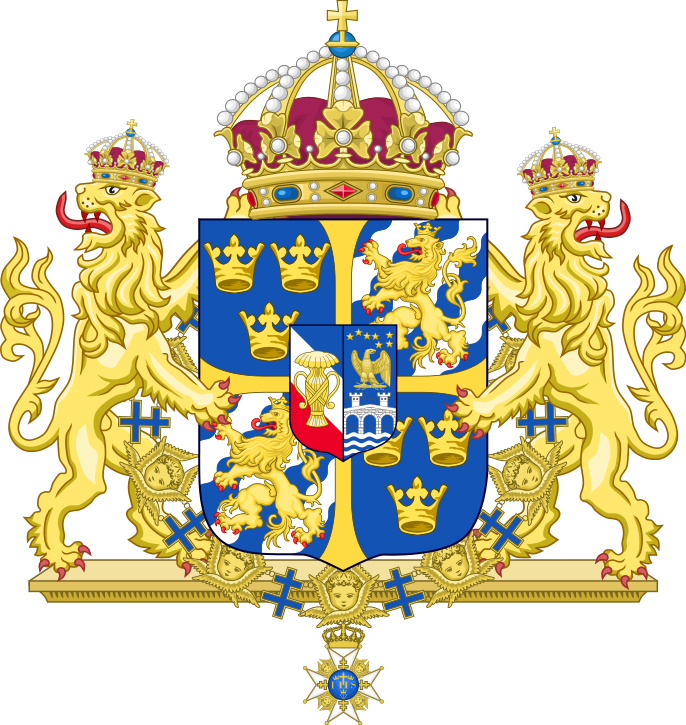 The Royal Arms of Sweden