Visitors for Passiontide and Easter at Salisbury in 1466


Easter Day 1466 fell on April 6th and in the days leading up to Palm Sunday and into Holy Week the city and cathedral at Salisbury were host to a Bohemian embassy led by Jaroslav Lev of Rozmital
[ Rosental ], the brother-in-law of George of Prodebrad [Prodebrady] King of Bohemia 1458-70, whose wife Joanna was Jaroslav's sister. The embassy, which comprised some 40 nobles and gentry, with 52 horses, was travelling around the courts of Europe outlining King George's idea of, well, let's be topical, a European Union.

King George was a moderate Hussite, of whom an online biography can be found at George of Poděbrady, whilst his brother-in-law was a Catholic. There is a biography of him online at Jaroslav Lev of Rožmitál

The embassy is recorded in two accounts which  have survived and are most easily accessible in The Travels of Leo of Rozmital through Germany, Flanders, England, France, Spain, Portugal and Italy 1465-1467, edited by Malcolm Letts for the Hakluyt Society ( CUP 1957).  Leo of Rozmital is the latinate form of Jaroslav's family surname.


One account was originally written in Czech by Schascko or Schaseck, Jaroslav's armour bearer or squire and the second, of which the manuscript still survives is in German and by Gabriel Tetzel from Nuremberg. As visitors they not always understand local conditions and pronunciation, but this is still a fascinating account. At Salisbury they recorded features otherwise unknown - and in some cases, ones that are well-nigh inexplicable. I have added some explanatory notes in [ ].

At Windsor the party was shown heart of St George and other relics and then travelled westwards:
Schascko wrote that:
"Windsor is twenty miles from London and Reading sixteen miles from Windsor. It is a village with a large and elegant monastery where dwell priests of the rule of the Virgin Mother of God.
In that church is a picture on the altar and an image of the Mother of God most beautifully executed. So much so that I have never seen its equal nor shallI ever see one to compare with it if I progress to the ends of the earth. No image could be more lovely or more beautiful." [p56] 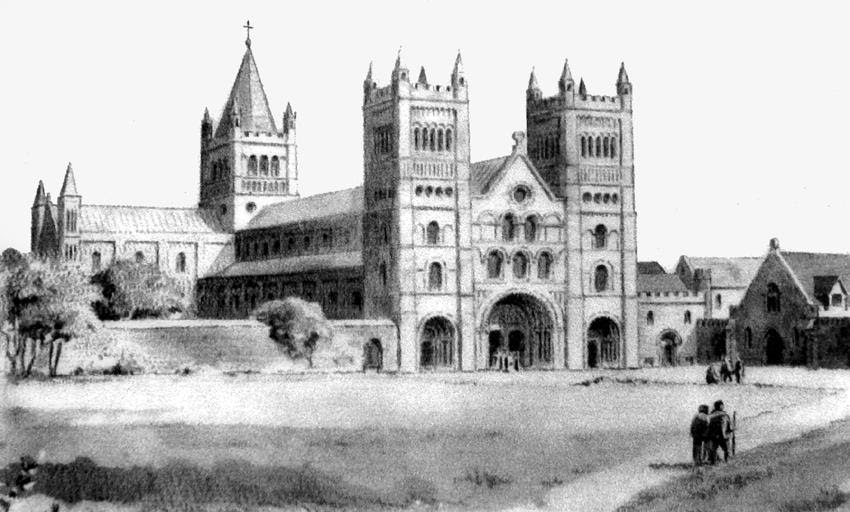 
Reading Abbey was almost entirely destroyed at the dissolution of the monastery in 1539. the fate of the painting which so entraptured Schascko is unknown, as is its origin. 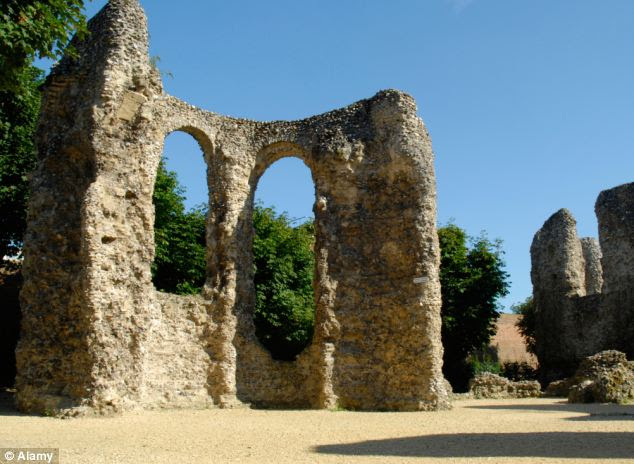 The remains of the south transept of Reading Abbey

Schascko admired English churches:
" I have never seen more elegant churches or monasteries than in England. All are roofed with lead and tin, and within they are marvellously adorned " [ p60 ]

The party travelled on via Andover to Salisbury

Salisbury Cathedral from the east by Wenceslas Hollar

Image: Wikimedia
" Salisbury is an open town but large. There we found another of the King's brothers named George
[ Duke of Clarence]. There is a very large and beautiful monastery [Salisbury cathedral which had canons not a monastic chapter. The cloister may have misled teh visitor into thinking it was an abbey]. When one considers the elegance of the structure both within and without, it is second to none. The tower adjoins it and is built with great skill [Presumably the tower and spire at the crossing rather than the detached bell tower]. I have nowhere seen more elegant figures. One represents the Mother ofGod, holding the infant Christ in her arms while the Three Kings offer gifts. The other shows the Angels opening the Sepulchre with Christ rising from the dead, holding a banner in his hand. Both scenes are so represented that they do not appear to be fashioned but alive and actually moving before our eyes. It will not be out of place to mention that they have no lights on the altar at the celebration of the mass, a reminder that the country had three times departed from the Christian faith [This is unexplained - the sarum Use clearly had candles. Was this a Lenten practice?] . The following custom is also observed in this country. On Easter Day and the day preceding, in glorious memory of the Lord's Supper, all take the sacrament in the church and on each altar mirrors are set up." [ This obscure reference might indicate the use of mirrors to amplify the candles on great feast days. My friend Andrew Knowles suggests this may be a confused description of reliquaries]  [p61]

Schascko then describes the Royal Maundy ceremony, although that would have been at the King's Court on Maundy Thursday when the Czechs were elsewhere, heading towards Poole

Schascko adds that:
"We arrived at Salisbury on the Friday before Palm Sunday. On Palm Sunday my lord with all his company was invited by the Duke to a banquet which was served most sumptuously as is their custom. Among other courses they served a bird like a duck which is produced in the sea, and which takes no food, but lives only on air." [This is barnacle goose, which intrigued both of Rozmital's chroniclers] [p62]

Salisbury Cathedral and bell tower from the west by Wenceslas Hollar

Tetzel's account of the same journey is as follows:

" After this my lord was taken to see several abbeys of the Benedictine Order which are in England.
[ Reading must be one of these but is not named ] We saw two churches which are splendid beyond measure [ i.e.Reading and Salisbury], also two splendid pictures and altars, as well as a great golden shrine in which lies St Sigmund [ i.e. St Osmund of Salisbury - recently canonised in 1457. In 1536 the cathedral Treasurer's inventory includes ' a great ymage of the holy Seynt Osmund, all of silver and gilt, ornate with stones of divers coloured and weighing 83 ounces ' ] They showed us also a stone which came from Jerusalem wherein is the imprint of our Lord's foot. It came from the Mount of Olives, from the place where our Lord used to pray. They showed us also many other famous relics. We saw also some fine carved figures which were so worked with weights that they moved as if to show how the Three Holy Kings brought gifts to our Lady and her Babe, how our Lord reached out to take the gifts, and how our Lady and Joseph bowed and did obeisance to the Three Kings, and how they took their leave. All this was presented with rare and masterly skill as if they were alive. There was also a similar carving showing our Lord rising from the tomb and the Angels ministering to him. This was a splendid and praiseworthy thing to see. [ the editor suggests this may have been commissioned by Bishop Ralph Erghum before his translation to Wells in 1388, where there still survives a mechanical clock with two knights who joust as the clock strikes] The Abbot [i.e. the Bishop, Richard Beauchamp 1450-81 ]  showed my lord great honour  and reverence, and gave him a splendid repast in his palace which was hung with tapestries and other priceless things. He conducted my lord also into the choir, where we heard the choir singing which was delightful to hear.
After this my lord was conducted to the King of England's brother, called Duke of Klaris who was then in England. [ Clarence who was in his seventeenth year, was a member of cathedral fraternity ]. At this my lord was much pleased and showed the Duke honour and respect. We spent Palm Sunday there and saw a splendid procession showing our Lord's entry into Jerusalem [preseumably at the cathedral]. The Duke himself went in procession and made my lord walk beside him. Afterwards my lord and his attendants had to dine at court, and the Duke and my lord ate together, while my lord's attendants sat with the counts and gentlemen. They provided for us an unbelievably costly banquet lasting three hours, and among other dishes they gave us to eat what should have been a fish, but it was roasted and looked like a duck." [this was presumably at Clarendon Palace, which was two miles east of the city]  [pp 57-8]

The Czechs moved on to Poole, where they spent Easter itself before a stormy crossing to Guernsey and then Brittany.

The famous clock of Salisbury cathedral, usually claimed to date from before 1386, though some consider the mechanism somewhat later, when it was housed in the detached bell tower, is discussed in dating_salisbury [Clocknet UK].

The fate of the bell tower is discussed in my 2011 post Vandalism at Salisbury Cathedral  - I see two of my illustrations there have expired, but one remains and can be supplemented by the following one:

This beautifully carved and brightly coloured roof boss, to be found in the easternmost bay of the South Quire Aisle, depicts one of St George’s Chapel at Windsor’s most famous relics, the Cross Gneth. Kneeling on either side of this Celtic cross are King Edward IV and Richard Beauchamp, Bishop of Salisbury, 1450-1481, Dean of Windsor, 1478-1481, and Chancellor of the Order of the Garter, 1475-1481.

Alas we can no longer marvel at the ingenuity of the mechanical figures at Salisbury, which are long gone - presumably at the reformation - but let us be thankful for Schascko and Tetzel, for without them we would know nothing of their existence at all.