The learned Dominican Vincent Ferrer (d. 1419) studied and taught at various places in the Crown of Aragon before being ordained at Barcelona in 1379 by the cardinal who would become the Avignonese antipope Benedict XIII.  He then became prior of his order's convent in his native Valencia but resigned in order to teach theology at the local cathedral school, a position that allowed him to preach, to administer the sacraments, and to employ his pen on behalf of Clement VII, whose claim to the papacy Vincent supported over that of Urban VI.  In 1394 he was called to Avignon by Benedict XIII, whom he served as apostolic penitentiary and as Master of the Sacred Palace.

In 1399, when it was clear to most that Benedict's cause was hopeless, Vincent was struck by a serious illness during which he experienced a vision bidding him to preach Christ to the world.  Prophesying the imminent coming of the Antichrist, he left Avignon in that year and spent the remainder of his life as a highly sought itinerant preacher urging repentance and atonement before the day of Judgment.  Miracles accompanying his apostolate -- of which the best known is the highly symbolic one of the baby dismembered and cooked by its mother and restored to unity and to life by Vincent -- were collected in canonization inquests and by his subsequent biographers (on which and on whom see now Laura Ackerman Smoller, The Saint and the Chopped-up Baby: The Cult of Vincent Ferrer in Medieval and Early Modern Europe [Ithaca, NY: Cornell University Press, 2014]).  He died at Vannes in Brittany and is entombed in that city's cathedral.

Vincent was canonized in 1455 by his countryman Pope Calixtus III.  The bull of canonization followed in 1458, in the pontificate of Pope Pius II.  Vincent's canonization Vita (BHL 8658) is by the Dominican humanist Pietro Ranzano of Palermo, Inquisitor General for insular Sicily (then a dominion of the Crown of Aragon) and afterward Bishop of Lucera (in autonomous but strongly Aragonese-influenced mostly mainland Sicily, vulgo Kingdom of Naples).

a) as depicted (full-length portrait and scenes of his life) by Colantonio in his dismembered mid-fifteenth-century altarpiece of St. Vincent Ferrer (c. 1455) in the Museo nazionale di Capodimonte, Naples: 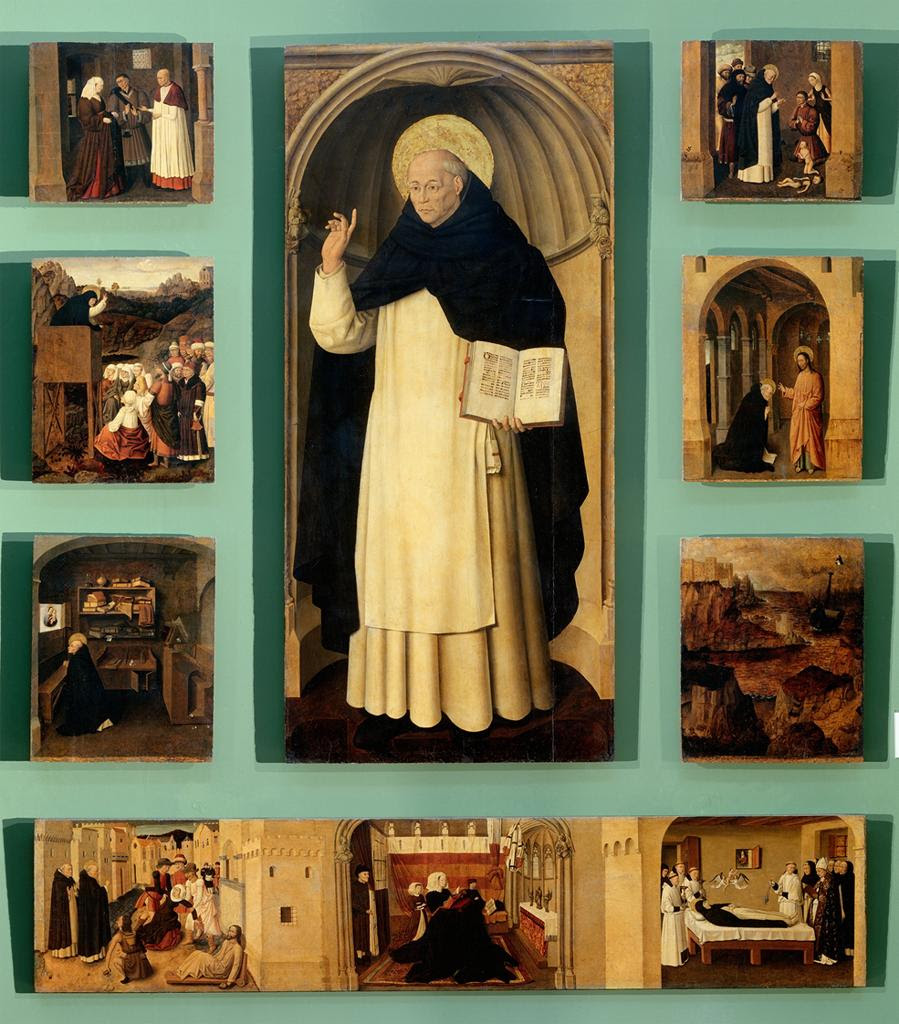 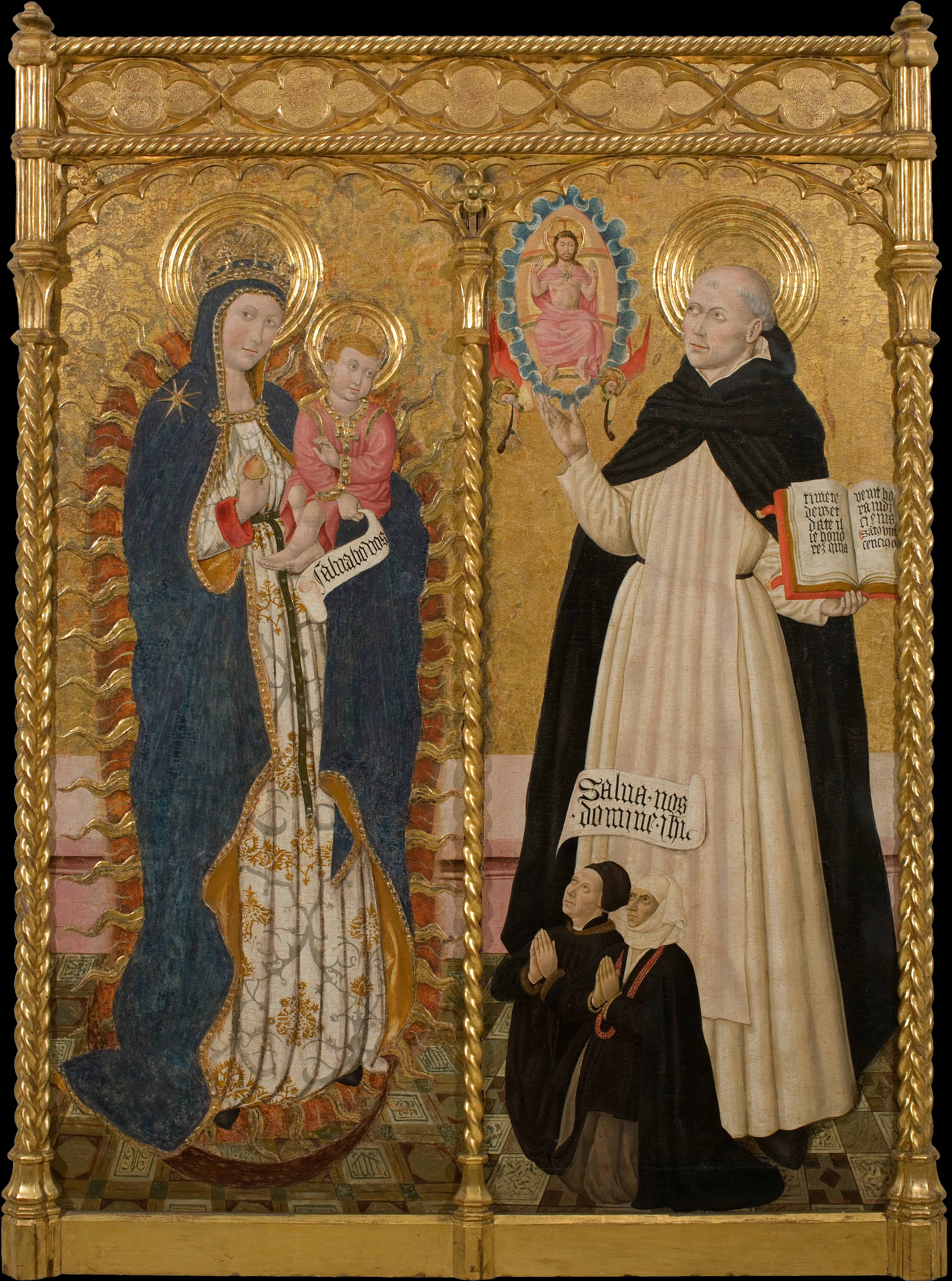 c) as depicted by a follower of Giovanni Bellini in the central panel of a later fifteenth-century altarpiece (c. 1464-1468) in Venice's basilica dei Santi Giovanni e Paolo:

The altarpiece as a whole: d) as depicted by Francesco del Cossa in the central panel of a now dismembered later fifteenth-century altarpiece from Bologna (c. 1473-1475; this panel in the National Gallery, London):

e) as depicted by Domenico Ghirlandaio (design) and workshop (execution) at centre of the main panel of a late fifteenth-century altarpiece (completed, 1496) in the Museo della Città in Rimini: 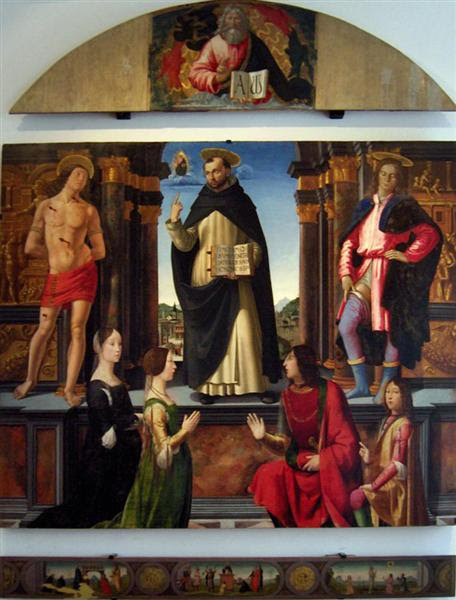