Yesterday was the feast of St Blaise, and following Mass I had the traditional blessing of my throat.

Not to be confused with his homonyms Blasius of Amorion, Blasius of Caesarea, Blasius of Veroli, and Blasius of Verona, the thaumaturge Blasius of Sebaste (d. circa 316, supposedly) is popularly known in English by a French form of his name (Blaise; other European forms include, but are certainly not limited to, Blasios / Vlasios, Vlaho / Blaž, Blasius, Blas, and Biagio / Biase). His cult is first attested from the sixth century, when the medical encyclopedist Aetius of Amida reports his being invoked in cases of illness of the throat.

Absent both from the earliest witnesses of the pseudo-Hieronymian Martyrology and from the probably originally late fourth-century Syriac Martyrology surviving in a manuscript written at Edessa in c. 411, and thus absent as well from the hypothetical fourth-century Greek martyrology thought to have provided a fund of feasts common to both, Blasius has both a legendary pre-metaphrastic Passio (BHG 276-276c; first attested from the eighth century) and a metaphrastic one (BHG 277); beyond these Greek texts there are versions in Latin and in other languages. These make him a physician of Sebaste in Armenia (now Sivas in Turkey) who is elected bishop, goes into hiding to avoid the Licinian persecution, lives in a cave where with the sign of the cross he cures sick animals, is sought out, arrested and imprisoned, tends the sick, operates miracles, is tortured, and finally is decapitated. Later versions have him flayed with carding combs prior to execution. Blasius' miracles include saving a boy from choking to death on a fishbone and causing a wolf to restore to a widow a piglet that it had taken from her. In the later Middle Ages his reputed care for ailments of the throat caused Blasius to be numbered among the Fourteen Holy Helpers; his association with animals made him a patron of keepers of livestock.

Since the tenth century Blasius has been the patron saint of Dubrovnik (formerly Ragusa), where an originally twelfth(?)-century head reliquary of him, formed as a Byzantine crown, is kept in that city's early modern katedrala Marijina Uznesenja (cathedral of the Assumption of the BVM):

There is an arm reliquary as well (in these photos shown along with the head reliquary):
http://tinyurl.com/ppqbucl c) Blasius' martyrdom (three scenes) as portrayed, perhaps by Roger of Helmarshausen, on a long side of a late eleventh- or early twelfth-century portable altar (copper gilt over wood) executed for the abbey of Abdinghof and now in the Erzbischöfliches Diözesanmuseum und Domschatzkammer in Paderborn:
http://tinyurl.com/jb3gwu6

e) Blasius as depicted in the mid- or slightly later twelfth-century mosaics of the Cappella Palatina in Palermo: h) Blasius as depicted in a late twelfth- or early thirteenth-century fresco in the santuario di Maria SS. Regina (a.k.a. Santa Maria d'Anglona) at Tursi (MT) in Basilicata:
http://tinyurl.com/yhkhges

i) Blasius as depicted in late twelfth- or early thirteenth-century gold and enamel work on his head reliquary in the treasury of Dubrovnik's katedrala Marijina Uznesenja:

j) The widow brings the pig's head to the imprisoned Blasius (below: wolf devouring the pig) as depicted in an initial "T" in a thirteenth-century ms. of Magnum legendarium austriacum (Zwettl, Stiftsbibliothek, cod. 13, fol. 105v):
http://tarvos.imareal.oeaw.ac.at/server/images/7002571.JPG

k) Blasius confronting the Roman governor persecuting him as depicted in a thirteenth-century glass window panel from the area of Soissons, now in the Louvre:
http://tinyurl.com/2lkkb6

m) Blasius healing a throat as depicted in a mid-thirteenth-century gradual for the Use of the abbey of Fontevrault (c. 1250-1260; Limoges, Bibliothèque municipale, ms. 2, fol. 63v):
http://www.enluminures.culture.fr/Wave/savimage/enlumine/irht1/IRHT_043441-p.jpg

q) Blasius (at center, betw. Sts. Eleutherius of Illyria and Hypatius [of Gangra?]) as depicted in the earlier fourteenth-century frescoes (between c. 1312 and 1321/1322) in the nave of the monastery church of the Theotokos at Gračanica in, depending on one's view of the matter, either Serbia's province of Kosovo and Metohija or the Republic of Kosovo:
http://tinyurl.com/d2mrvqk
Detail view (Blasius):
http://tinyurl.com/lm44odu

r) Blasius as portrayed in an earlier fourteenth-century (second quarter) chiefly silver reliquary bust probably of French manufacture, formerly in the collegiate church at Braunschweig dedicated to him (commonly known as the Braunschweiger Dom) and now in the Bode Museum in Berlin:
http://tinyurl.com/pqzvjwv s) Blasius (at left; at right, St. Babylas) as depicted in the earlier fourteenth-century frescoes (betw. 1335 and 1350) in the altar area of the church of the Holy Ascension at the Visoki Dečani monastery near Peć in, depending on one's view of the matter, either the Republic of Kosovo or Serbia's province of Kosovo and Metohija:
http://tinyurl.com/y89acds

t) Blasius' flight from persecution as depicted in a mid-fourteenth-century copy, from the workshop of Richard and Jeanne de Montbaston, of the Legenda aurea in its French-language version by Jean de Vignay (1348; Paris, BnF, ms. Français 241, fol. 65v):
http://tinyurl.com/yzmwu82

u) Blasius (at far right, after Sts. Spyridon the Wonderworker and Clement of Ohrid) as depicted in the later fourteenth-century frescoes (1360s and 1370s; restored in 1968-1970) in the church of St. Demetrius in Marko's Monastery at Markova Sušica (near Skopje) in the Former Yugoslav Republic of Macedonia:
http://tinyurl.com/h5ancvj
Detail view (Blasius):
http://tinyurl.com/zgp4cvb

v) Blasius (at left; at right, St. Prochorus) as depicted in the later fourteenth-century frescoes (1375) in the church of St. George in Longanikos (Laconia administrative region):
http://tinyurl.com/zfpap8g

w) Blasius (at left) as portrayed in relief on a later fourteenth- or fifteenth-century mezzanino struck by the Republic of Ragusa:
http://www.coingallery.de/Heilige/B/Blasius_1.jpg

x) Blasius (while at prayer, attacked by a demon) as depicted in a late fourteenth- or early fifteenth-century copy of the Legenda aurea in its French-language version by Jean de Vignay (Rennes, Bibliothèque de Rennes Métropole, ms. 266, fol. 69v):
http://tinyurl.com/hrb7yk2

y) Blasius as portrayed holding a model of Ragusa in a fifteenth-century silver-gilt statuette kept on the high altar of Dubrovnik's katedrala Marijina Uznesenja: z) Blasius as depicted (at left; at right, St. Spyridon the Wonderworker; both protecting livestock) in an early fifteenth-century Novgorod School icon (c. 1407) in the State Historical Museum, Moscow:
http://www.icon-art.info/masterpiece.php?lng=en&mst_id=562

bb) Blasius' martyrdom as depicted by Mariotto di Nardo in an earlier fifteenth-century predella panel (c. 1425) in the Musée des Beaux-Arts in Rennes:

cc) Blasius as portrayed (at centre; at left, St. Ulrich; at right, St. Erasmus of Formia) in the earlier fifteenth-century polychromed wooden statues (before 1436) re-used in the central compartment of the otherwise early sixteenth-century winged altarpiece (1517/1518; restored c. 2000) by Jörg Lederer in the choir of the Kirche St. Blasius in Kaufbeuren:

ee) Blasius as depicted in a mid-fifteenth-century initial (c. 1450-1460) by the Master of the Murano Gradual, cut from a gradual and now in the J. Paul Getty Museum in Los Angeles:
http://www.nga.gov/exhibitions/2005/miniature/index.shtm
http://www.getty.edu/art/exhibitions/power_piety/ 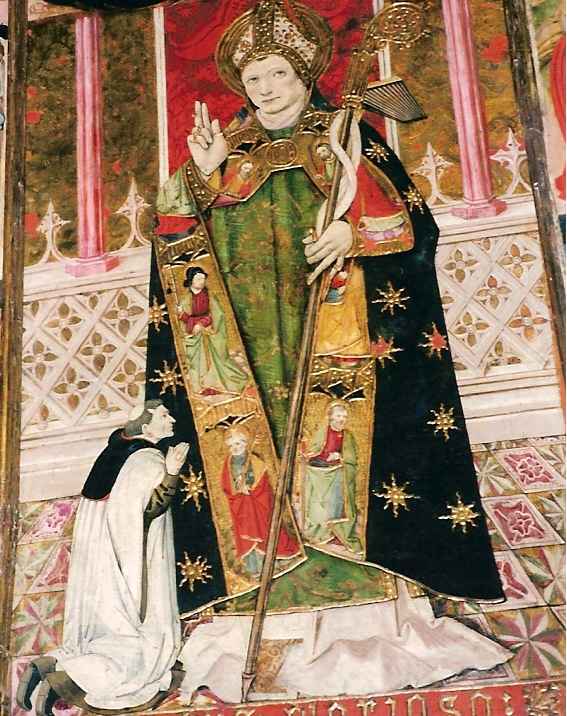 http://tinyurl.com/yk7rrbk
The altarpiece as a whole: 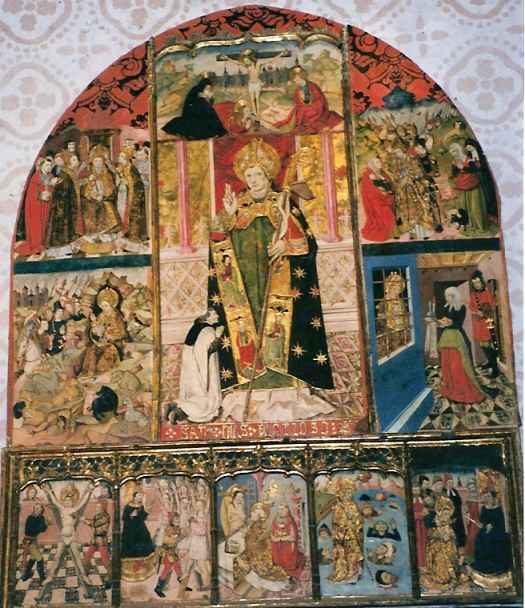 Blasius' martyrdom as depicted in one of the predella panels: 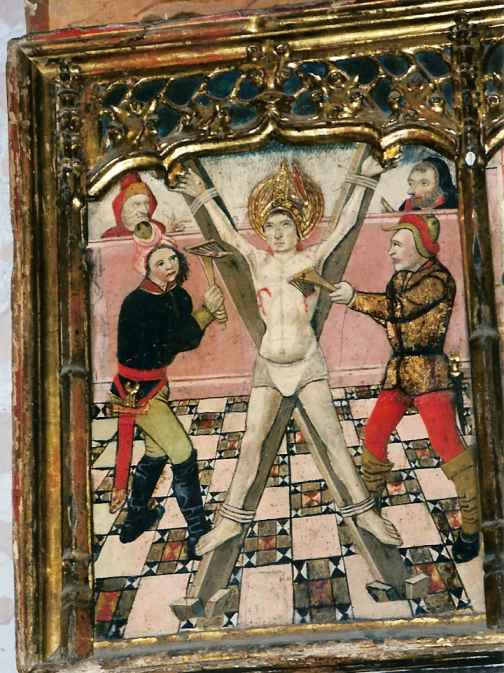 ii) Blasius as depicted in a detached later fifteenth-century fresco (between 1475 and 1500; from the refectory of the convento di San Biagio in Cesena [FC] in Emilia-Romagna) in that city's Pinacoteca comunale:

jj) Blasius holding a model of Ragusa as portrayed in a later fifteenth-century statue on the Ploče Gate in the same city (now of course Dubrovnik):
https://travelsofed.files.wordpress.com/2011/11/100_4555.jpg

ll) Scenes from Blasius' legend as depicted in twenty late fifteenth-century painted panels (c. 1480-1490) mounted on the north wall of the nave of the Kirche St. Blasius in Kaufbeuren: 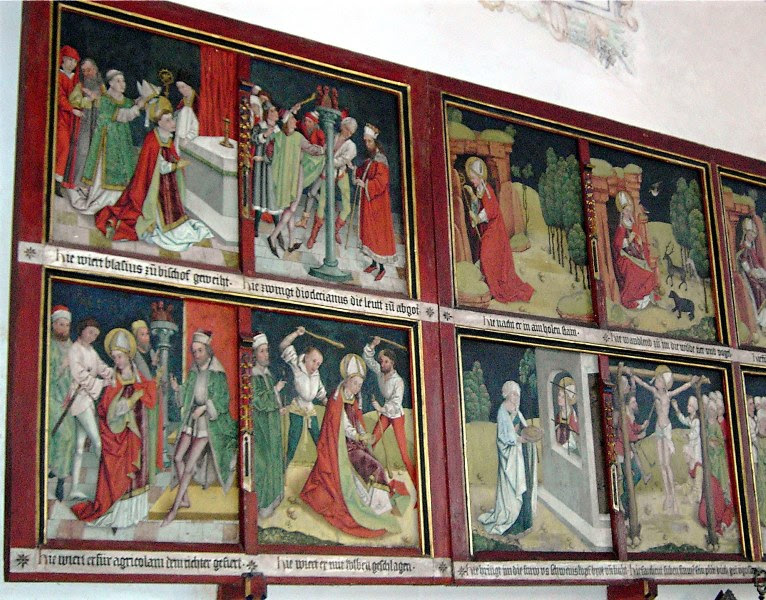 mm) Blasius (at left, holding a candle; at right, St. John the Baptist) as depicted by Hans Memling on a wing of his Passion (or Greverade) Altarpiece of 1491 in the Museum für Kunst- und Kulturgeschichte in Lübeck: nn) Blasius (second from right, flanking the BVM; at far right, St. Roch / Rocco) as depicted by a Tuscan follower of Neri di Bicci in a late fifteenth-century panel painting (1498; for the abbey of Santa Maria della Salute et San Niccolao in Buggiano [PT]), exhibited by the Carabinieri in 2015 as part of the exposition "La memoria ritrovata" in Cagliari:

oo) Blasius (third from left; after St. Florus of Illyricum and St. Nicholas of Myra and before St. Anastasia of Sirmium) as depicted in a late fifteenth- or early sixteenth-century Novgorod School wooden triptych in the State Tretyakov Gallery, Moscow:
http://www.icon-art.info/masterpiece.php?lng=en&mst_id=513

pp) Blasius (at left, holding a model of Ragusa; at right, St. Paul the Apostle) as depicted by Nikola Božidarević / Nicholas of Ragusa in his very early sixteenth-century triptych (c. 1501) in the Dominican convent in Dubrovnik: 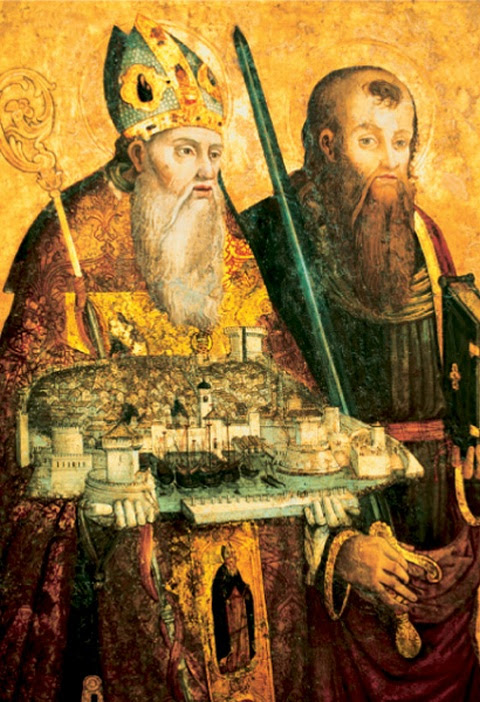 http://tinyurl.com/owlbllk
The triptych as a whole:

rr) Blasius as portrayed in a stone bust on the early sixteenth-century Field Gate (1506) at Ragusa's former dependency of Ston (Dubrovačko-neretvanska županija) in Croatia:
http://www.kroatien-netz.de/data/media/148/Ston_Saline_Stadt_Kloster_030_680.jpg

ss) Blasius as portrayed in relief (at far right) among the Fourteen Holy Helpers on the early sixteenth-century tomb of the Kurfürstin Anna (1512) in the Evangelisch-lutherische Pfarrkirche St. Maria in Heilsbronn (Lkr. Ansbach) in Bayern:
http://tinyurl.com/zbdf72j

tt) Blasius as portrayed in an early sixteenth-century ceiling boss (c. 1519) in the choir of the Evangelisch-lutherische Kirche St. Sixti in Northeim (Lkr. Northeim) in Niedersachsen:
http://fotos.verwaltungsportal.de/seitengenerator/viib_blasius_400.jpg

uu) Blasius as depicted by Fermo Stella in an earlier sixteenth-century panel painting of the Madonna between St. Blasius and St. John the Baptist (1536) in the Museo Valtellinese di Storia e Arte in Sondrio (VA) in Lombardy (detail view):
http://www.wwmm.org/immagini/z_848.jpg

vv) Blasius as depicted (at upper right) in an unframed earlier sixteenth-century polyptych (1537) in the chiesa del Purgatorio at Ruvo di Puglia (BA) in Apulia:

ww) Blasius as depicted by Theofanis Strelitzas-Bathas (a.k.a. Theophanes the Cretan) in the mid-sixteenth-century frescoes (1545 and 1546) in the katholikon of the Stavronikita monastery on Mt. Athos:
http://images.oca.org/icons/lg/February/0203Blaise.JPG