The Prince of Liechtenstein at the Oxford Union


This evening I went to hear the Prince of Liechtenstein speak at the Oxford Union. H.S.H Prince Hans-Adam II was speaking about his view of how government worked in the Principality and how that might be employed elsewhere.

He began by making the point that if we look at the state model we need to look to the past to plan for the future. Globalisation and science offer ways for that future. For that there is a need to ensure peace, to have a system that serves all the people with maximum democracy and the rule of law

The State has therefore to be a service company, and emigration by those who feel disenfranchised or disengaged is not the answer. There are he considers groups in free countries who feel oppressed - in Northern Ireland, the Basques, the people of South Tyrol, the aborigines of Australia, the indigenous natives of North and South America.

For the Prince the splitting of the Swiss canton of Berne in 1974 to create a separate canton of Jura was an inspiring example of self determination at local level.

Under the Liechtenstein constitution all 11 units of locall administration have the right to secede if they wish. People have indeed questioned the case for the Principality to exist.

The risk of minorities resorting to violence has been seen in Yugoslavia, Russia, and in the break- up of Austria-Hungary. In any community, minorities may want to leave.

He proposes the service model - the state will not waste taxpayers money on defence.
What will remain to the state ould be law and order, foreign policy and education, and the rest is for the to decide at the local level.

The fear of anarchy leads to dictatorship, so maintaining law and order are the key to keeping a democratic system in place. Laws must be written in an understandable way and to inform subjects. Should not this be taught in schools and the text given to people?

Regulation can be a burden for business firms. If the tax laws are unclear it is the fault of the government that enacted them.

Direct democracyis not popular with politicians, and Switzerland and Liechtenstein are in contrast to  other countries. In 1990 the latter rejected a tax law. There remains the danger that the population may vote against minority rights.

Personal standard of H.S.H. The Prince of Liechtenstein
Adopted in 1982

Under the Liechtenstein constitution the Prince has a veto.
With representative democracy, voters cannot choose candidates in the way they might like, but rather vote for a programme, and have to wait until the next election to change the direction of policy.
Today education has levelled up the electorate, but all have to put up with bad decisions

Education is a state right, but should the state run schools or should they be privatised, run by local communities or by business? He favoured a voucher system, which gives the choice to parents and indeed children, and could be used to support home schooling. The Teachers unions are against such schemes, but people feel the state system not adequate.

Indirect taxation saves money for the State; the local community is funded by direct taxation. A social policy of differing rates does not help the poor. A minimalist state would require less cash. It should be possible to sell state property if it is not needed, and to sell off assets. this could help to pay off the national debt. Liechtenstein has done this although possessing few natural assets, but has paid off that debt. This raises the question as to whether taxpayers want to do so.

In answer to questions from the audiencewhen asked why as monarch did he have the idea of direct democracy he said that he considered that today there was need for more than religious validation for the monarchy. A clause in the Constitution allows the people to remove the Prince or abolish the monarchy by a simple majority.

Historically stStates rise and fall, but can we afford this in the third millennium? Can the ballot  replace the battlefield.

Asked further about the revised Constitution he has introduced in his Principality the Prince explained that legislative power remained with the Prince, and that populace were happy with that. The Parliament had parties. Draft laws were discussed with the Prince and Hereditary Prince ( who now exercises regency powers in routine matters ) and the chief minister, and then presented to Parliament.

The people, if they gather 1000 signatures, or 1500 to change constitution, can present to Parliament petitions for a popular vote, which will be signed off by the Prince. His father, Prince Franz-Josef  II,  did attract criticism once by exercising his veto, but Prince Hans-Adam says in advance of a vote if he intends so to do.

Sometimes such direct legislation is badly drafted, against the constitution or conflicts with international obligations. Democracy is the best system, keeping a check on the other side, and it keeps political life in touch with reality. He saw it as a listening to the market, indeed market research, building up from the local level.

Decolonisation outside Europe copied centralised models, when itwould have been better to build up from villages.

He said he had enjoyed business more than government which takes longer, and proved more tiresome

He thought the EU had failed as as United States, and that new model was needed, one that would bring government down to the local level. He also thought it needed a smaller parliament, more like the US Congress is size - he worked there in his youth.

Asked about the impending referendum he said he beinclined to vote to leave the EU, and welcome the UK to the EEA.

As to what happened if smaller units compete he thought it was for the UN to keep the peace - though this might be.Utopian. Liechtenstein had got rid of its army in the mid-19th century, it having been paid for from his own pocket by the Prince.

Parliaments have to be elected, and, in effect, politicians buy votes, and in managing the bureaucracy that ensues there was  political horsetrading - the monarch was there as referee.

This was an interesting and wide ranging address. I am tempted to say taht what works in Liechtenstein might not be practical in larger units. In the Swiss Confederation it has along standing tradition, and a unique constitutional dispensation. As a model it does require an independent Monarch to reconcile and monitor, and that role is exercise wisely and well by the Prince's fellow European monarchs within their existing constitutional dispensations. How far larger realms could copy the Liechtenstein model is another matter.

There is more about the Principality and its history at the following links; 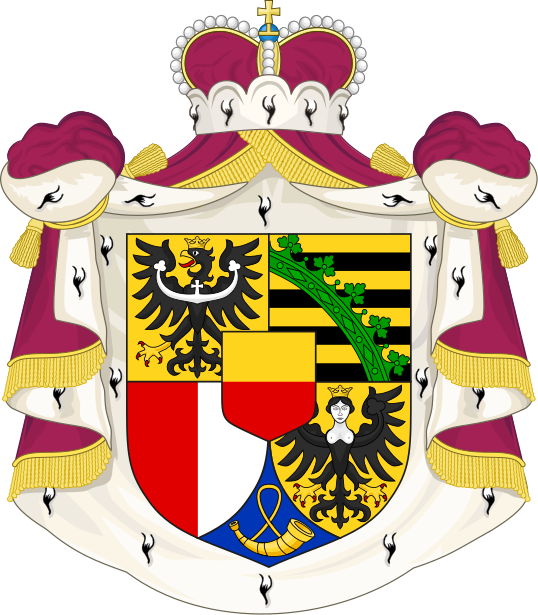 The Arms of the Principality of Liechtenstein