Today is the feast day of St Dorothea of Caesarea.

Though her legend is reasonably well known (it was widely popular in the later Middle Ages), the historical Dorothea of Caesarea in Cappadocia is a cipher.  Her earliest mention occurs under today's date in the late sixth- or early seventh-century (pseudo-)Hieronymian Martyrology, where of course no details are provided and where even her association with Caesarea in Cappadocia is found only in the martyrology's later Recension B.  The details first appear in St. Aldhelm's late seventh- or very early eighth-century prose De virginitate and are in essence a retelling of the legend of the earlier attested Dorothea of Alexandria in Egypt (not celebrated liturgically as a saint), about whom one first hears in Rufinus' early fifth-century additions to Eusebius' Historia ecclesiastica.  On the other hand, Dorothea of Caesarea in Cappadocia's entry in the (ps.-)HM seems to have furnished the legend with its secondary martyr Theophilus Scholasticus, as he's present there in the names immediately following hers (Epternach version: dorotae teofili scolastici) but absent from Rufinus' account of Dorothea of Alexandria.  The apples and the roses (later and more generically, flowers) that become Dorothea's characteristic attribute make their first appearance in the ninth-century martyrology of St. Rabanus Maurus and the six-year-old boy whom brings them to Theophilus makes his first appearance in the also ninth-century martyrology of St. Ado of Vienne. The basket containing these gifts is an even later development. The basket containing the dog Toto belongs to another Dorothy altogether.


Some medieval images of Dorothea of Caesarea in Cappadocia:

a) Dorothea as depicted in the early twelfth-century mosaics of Grado's four female saints in the cupola di San Leonardo of the basilica cattedrale di San Marco in Venice:

b) Dorothea as depicted (at right; on the wing at left, St. Mary Magdalene) by Ambrogio Lorenzetti on a wing of an earlier fourteenth-century triptych (c. 1325) in the Pinacoteca Nazionale, Siena: d) Dorothea's hand holding a basket as portrayed on a fifteenth-century arm reliquary in the treasury of the Catedral Primada Santa María in Toledo:

e) Dorothea as portrayed in an early fifteenth-century limewood statue with traces of polychrome (c. 1410-1420) in the Magyar Nemzeti Galéria in Budapest:


f) Dorothea as depicted (at upper left in the central panel) by the Elder Master of the Holy Kinship in an early fifteenth-century triptych of the BVM and female saints (c. 1410-1420) in the Gemäldegalerie in Berlin: 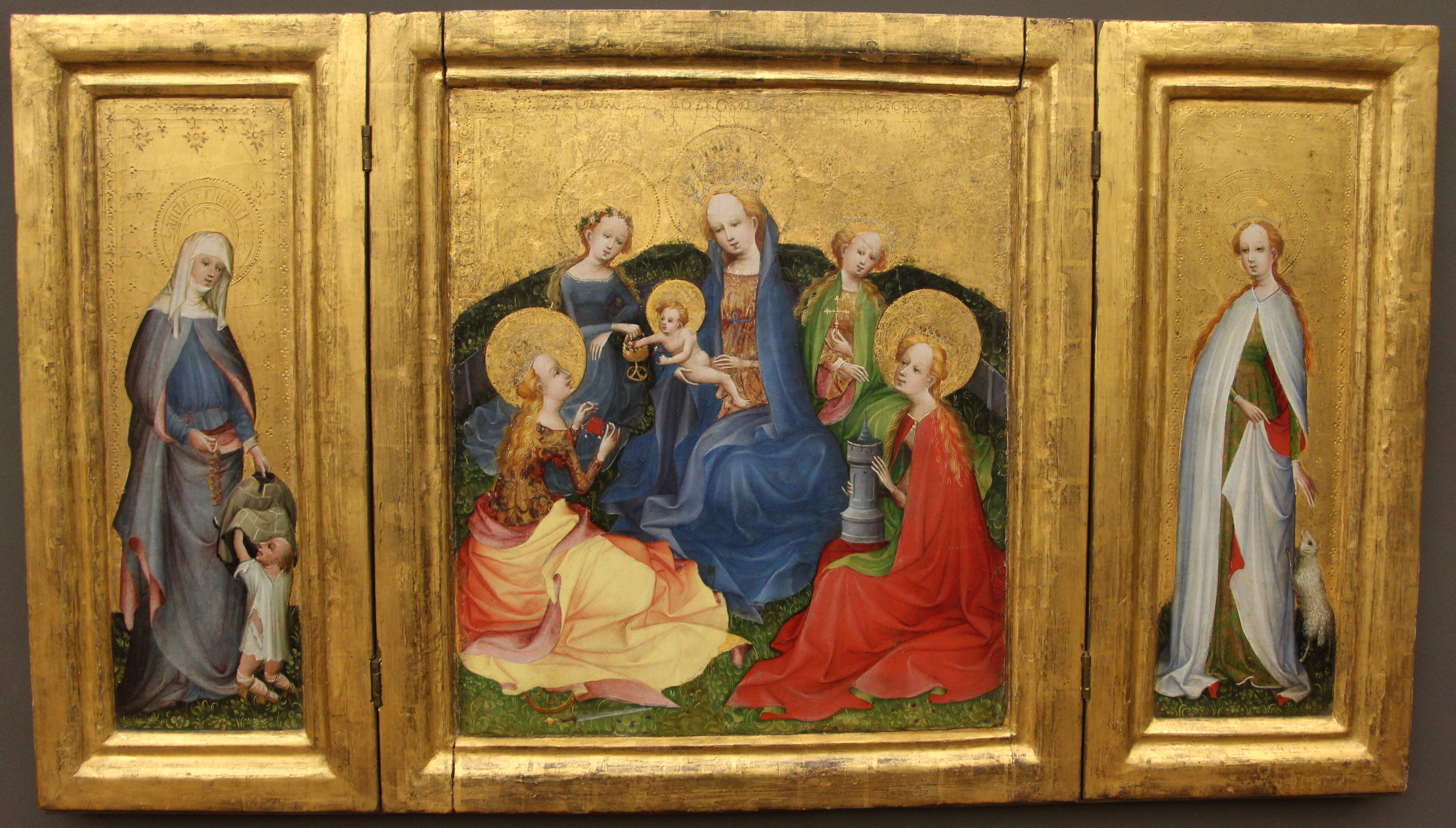 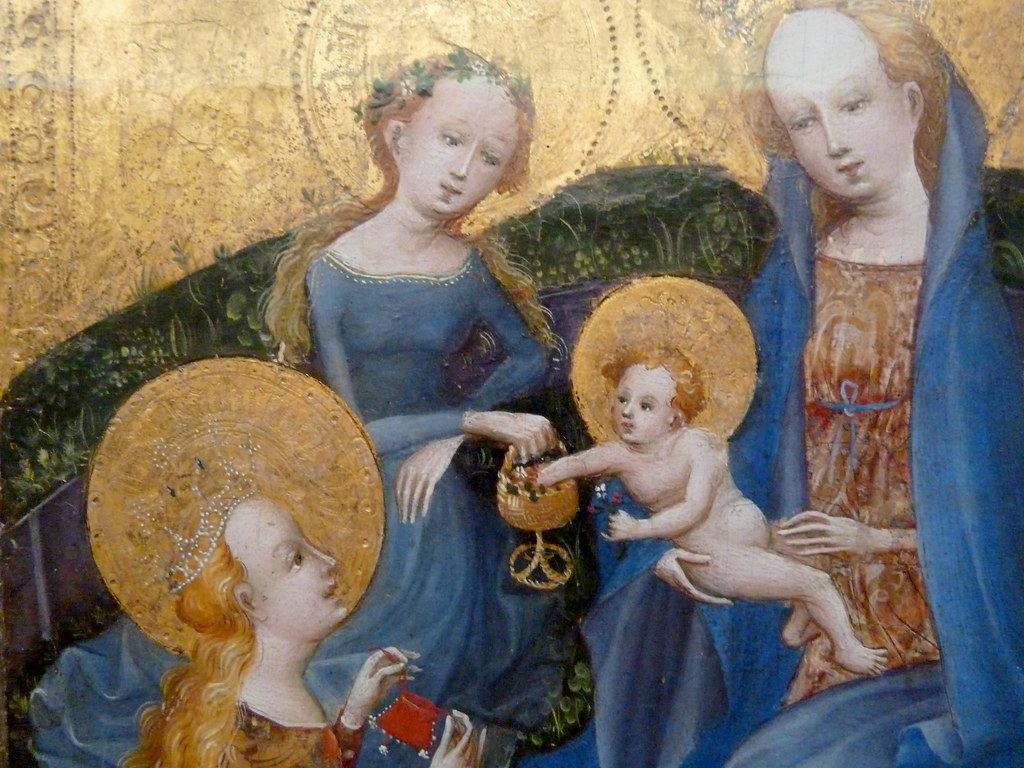 g) Dorothea as portrayed by Francesco di Valdambrino in an earlier fifteenth-century polychromed wood statue (1420s) in the Szépmûvészeti Múzeum in Budapest:

i) Dorothea as portrayed in a silver and silver gilt statuette in an earlier fifteenth-century silver monstrance (c. 1430-1440), set with precious stones, in the Historisches Museum Basel: 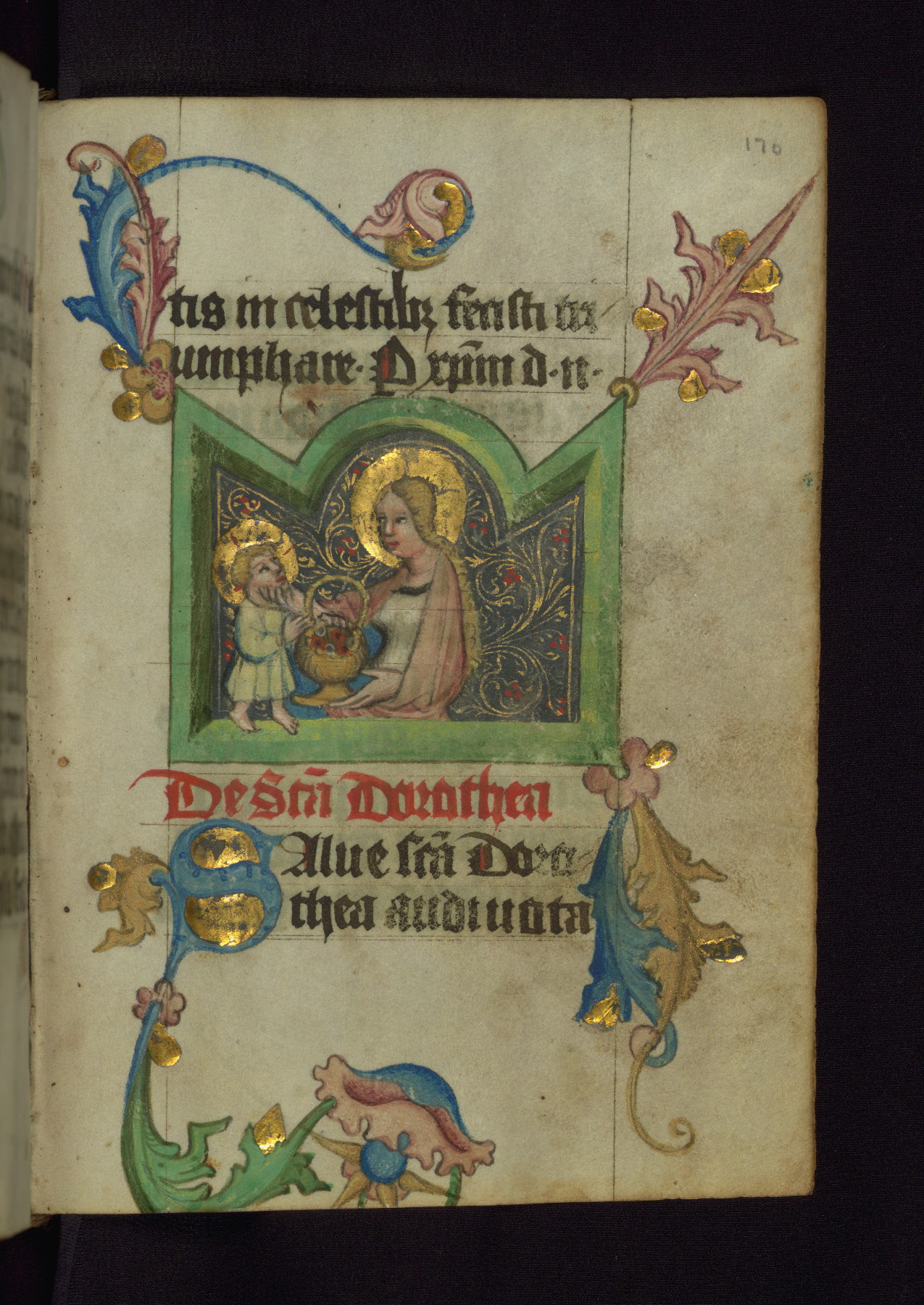 k) Dorothea at left (at right, St. Catherine of Alexandria) as depicted by the Master of the Darmstadt Passion in an earlier fifteenth-century panel painting (c. 1440) in the Musée des Beaux-Arts in Dijon (in a late medieval interpretation reflected here the boy who serves as Dorothy's messenger is the young Jesus):

m) Dorothea as depicted (second from right) in a set of mid-fifteenth-century glass window lancets (c. 1440-1446; from the former Carmelite church in Boppard am Rhein) in the Metropolitan Museum of Art in New York [for much higher resolution click on the image]:
http://images.metmuseum.org/CRDImages/cl/original/h1_37.52.1-6.jpg
Detail view (Dorothea): 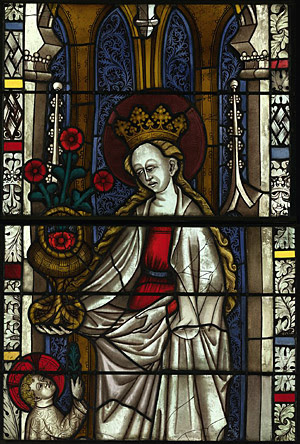 The Metropolitan Museum's page on these lancets:
http://www.metmuseum.org/collection/the-collection-online/search/473007

o) Dorothea as depicted in a later fifteenth-century fresco in the now deconsecrated church of San Pietro at Carpignano Sesia (NO) in Piedmont:

p) Dorothea as depicted in a later fifteenth-century fresco (1470s) on the apsidal arch of the chiesa di San Giacomo in Ortisei / Urtijëi / St. Ulrich (BZ) in the South Tirol's Val Gardena:

q) Dorothea as depicted in a late fifteenth-century tapestry of the BVM and female saints from the former Carmelite church in Boppard am Rhein, now in the Burrell Collection in Glasgow:
https://boppardconservationproject.files.wordpress.com/2013/10/st-dorothy.jpg
The tapestry as a whole:
http://tinyurl.com/hwxx5cj

r) Dorothea as depicted (at right) on a shutter (closed position) of a late fifteenth-century private devotional shrine of Swabian origin (c. 1490) in the Metropolitan Museum of Art in New York: The object as a whole [for much higher resolution click on the image]: s) Dorothea as depicted in a fifteenth- or sixteenth-century book of hours for the Use of Sarum (Riom, Bibliothèque municipale, ms. 76, fol. 37v):
http://www.enluminures.culture.fr/Wave/savimage/enlumine/irht4/IRHT_080691-p.jpg

u) Dorothea as portrayed by Andrea della Robbia in a late fifteenth- or early sixteenth-century terra cotta statue in the Bode Museum in Berlin:

v) Dorothea as depicted (second from right) on the earlier sixteenth-century chancel screen in the church of St. Mary, North Tuddenham in Norfolk: 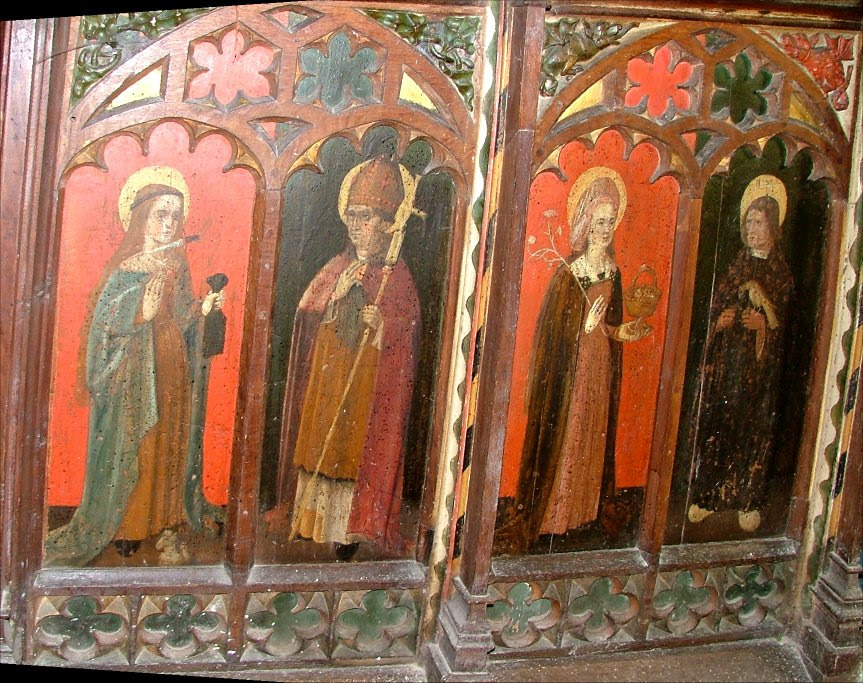 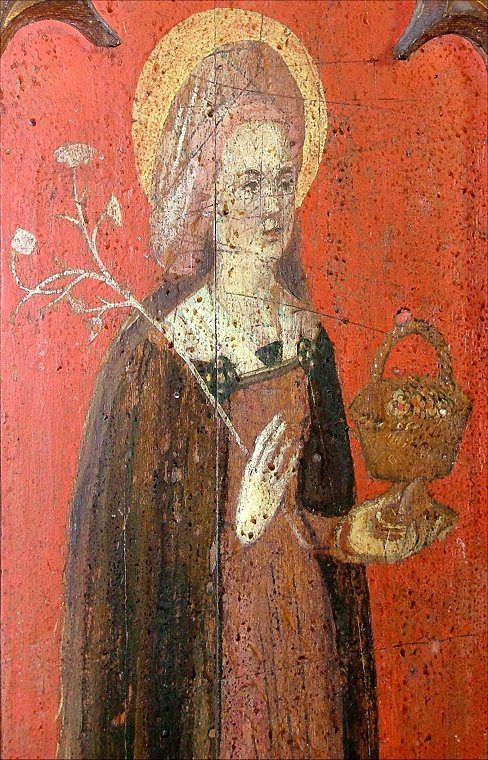 w) Dorothea as depicted (at right; at left, St. Peter) by the Master of the Saint Bartholomew Altarpiece in a fragment of that work (c. 1505-1510; central panel in the Alte Pinakothek in Munich) in the National Gallery in London: 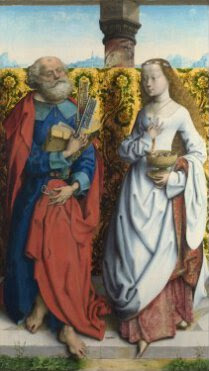